Why ‘Anger is not a Gift’ In Jiu-Jitsu 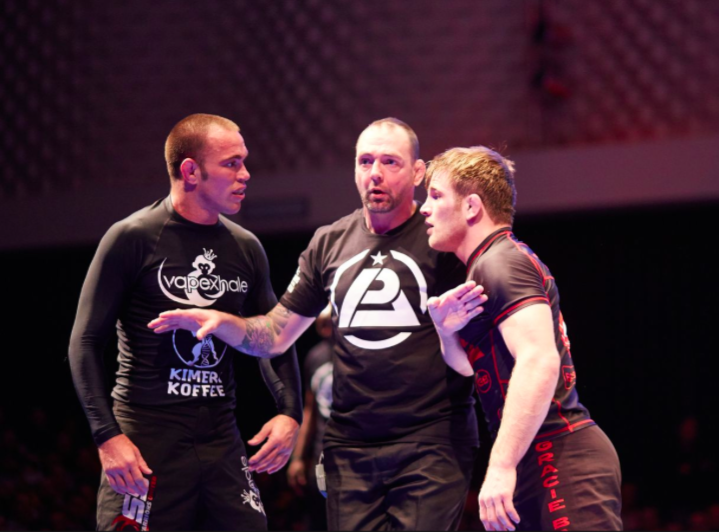 Guest post from Thomas Nadelhoffer the Grumpy Grappler, an Associate Professor of Philosophy, Psychology, and Neuroscience at College of Charleston (SC). When he’s not enjoying time with his wife and pups in the lovely lowcountry, he’s obsessed with the grappling arts. He has traveled the country and the world as part of his ongoing jiu jitsu journey and he hopes to do more exploring soon.

“We all experience anger; anger only becomes a serious concern when an individual is angry too frequently, too intensely, and for too long.” ~ Raymond W. Novaco, 1984

“Anyone can become angry, that is easy…but to be angry with the right person, to the right degree, at the right time, for the right purpose, and in the right way…this is not easy.” ~ Aristotle

While I love Rage Against the Machine more than a 43-year-old probably should, I must state from the outset that when it comes to jiu jitsu (and life more generally) anger is, under almost all circumstances, most decidedly *not* a gift. So, when I was asked by Gile Huni of BJJEE.com to write a post about anger both on and off the mats, I was happy to oblige. In part, this is because I am a moral psychologist by training (so, I know a bit about the evolutionary psychology of anger as well as the pernicious effect it can have on mental health, familial and social relationships, etc.). But I also happen to be someone who has struggled with anger-related issues since I was a child—a deeply entrenched temperament that has proved to be a consistent impediment to progress in both my life and in jiu jitsu.

So where to begin? Perhaps it would help if we started with a clear and concise definition of anger—which is an emotional state that can range from very mild frustration to intense fury and rage that is usually targeted at other people or (perceived) unjust social events or relations. Unsurprisingly, anger can trigger our “fight or flight” response. As such, anger is coupled with physiological and cognitive changes—e.g., increased blood pressure and heart rate, spikes in adrenaline and noradrenaline, narrowed attentional focus, decreased executive control, etc.  As noted by The American Psychological Association:

“Anger can be caused by both external and internal events. You could be angry at a specific person (such as a coworker or supervisor) or event (a traffic jam, a canceled flight), or your anger could be caused by worrying or brooding about your personal problems. Memories of traumatic or enraging events can also trigger angry feelings. The instinctive, natural way to express anger is to respond aggressively. Anger is a natural, adaptive response to threats; it inspires powerful, often aggressive, feelings and behaviors, which allow us to fight and to defend ourselves when we are attacked. A certain amount of anger, therefore, is necessary to our survival.”

In this respect, anger is an emotional response that enabled our ancestors to survive in contexts where they may have otherwise perished. So, there is no doubting that it is a biological adaptation—which explains why anger is a universal and very powerful human emotion. The problem is that anger can go awry (and often does). Whether the source of one’s disproportionate anger is drug addiction and alcoholism, childhood trauma, mental illness, post-traumatic stress disorder, or myriad other social and biological factors, it’s clear that anger can become maladaptive and lead to unhealthy and even unethical behavior. So while anger can be helpful under certain limited circumstances—when we are attacked or when we face serious injustice—it is just as likely to be unwarranted and counter-productive in our daily lives. The question at hand, however, is whether anger is useful and adaptive for jiu jitsu. After years of struggling with anger on the mats, I have come to think of it as more of an impediment to overcome than an emotion to be embraced. I am well aware that my stance may run counter to how many people view the relationship between anger and jiu jitsu. It is common to hear people say that they love jiu jitsu because it enables them to take out their anger and daily frustrations on the mats. It is also frequently said that a solid dose of anger is good to amp one up before competition. After all, anger fuels aggression, which in turn is supposed to fuel one’s competitive edge.

While anger can certainly be used as “tackling fuel” (to quote the great Happy Gilmore) and while practice and competitions can be used to work out one’s angers and frustrations, I don’t think it’s a healthy way to approach training or competing. While training may very well help relieve tension, frustration, and anger as a happy by-product, this should not be the goal of training. The goal of training should be singular in its focus—namely, to work on mastering the techniques of jiu jitsu. A secondary goal should be to improve one’s training partners so they, too, build their skill set and knowledge base.

On my view, training partners are not to be used as mere tools for one’s own emotional needs—an attitude that more often than not turns what should be relaxed and friendly rolls into tense battles imbued with too much negative energy. If one looks to “take out” one’s anger in class or competition, one is selfishly privileging one’s own emotional needs over the martial art itself and over one’s partners. While training and competing in jiu jitsu can have a positive therapeutic effect on people who are prone to anger, this therapeutic effect should not be one’s focus. That’s what psychiatrists and counseling are for—especially if one has genuine anger issues. One’s focus while training or competing should be on mastering the gentle art rather than satisfying one’s own emotional needs.

That said, what should one do if one has anger-related issues in order to keep them from impeding one’s progress in jiu jitsu (as in life). That will be the subject of a follow-up post. For present purposes, I simply wanted to say a bit about what anger is and how and why it can be maladaptive on the mats. For while training is certainly a great way to relieve tension and stress (the hilarious video below highlights this auxiliary benefit), that is different than using training as a way of taking out one’s stress and angers on one’s training partners and fellow competitors—which tends to create more problems than it solves.