Who was the first European to win a gold medal at the BJJ Worlds in the black belt division? Laurence Cousin Fouillat of France! 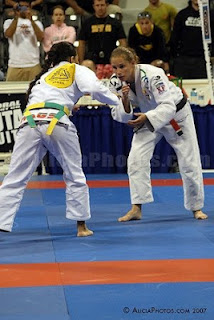 Thanks to my friends at BJJ Heroes and  IKUSA.FR for the original article

The French Laurence Cousin Fouillat is regarded as the first European female black belt in Brazilian Jiu Jitsu (2005). An incredibly accomplished grappler with wins at the FILA World Championships and the World Cup, Laurence was also the 2nd non Brazilian to win a gold medal at the Mundial de Jiu Jitsu in the black belt division (2007 same year as Rafael Lovato Jr).

Laurence Fouillat was born on the 7th of August, 1981 in the town of Saint Germain en Laye, 20 km from Paris,France. She started practicing sports through Gymnastics but picked up martial arts when she was 9 years old, through Aikido, as her father wanted Laurence to know how to defend herself. Her father decided on Aikido because it was not a competitive sport (the young miss Cousin dreaded competition in her young days).

By the time she reached 18 years old she was ready for her Aikido black belt test, but fate would have it differently. Laurence Cousin’s instructor was very open minded towards martial arts and often had people from other styles coaching a class at the dojo, one day he introduced to the class a BJJ instructor by the name of David Rivière (who was a blue belt at the time). This was the first contact Laurence had with Jiu Jitsu but she enjoyed it very much and started practicing every time she could even without proper supervision. She got so involved in the sport that she decided to compete, but in order to do so, she needed to register with a team, and so she signed up for classes at the Cercle Tissier. She fought for this academy in her first tournament and won! This was in June, 2000.

Being supervised by BJJ instructors Alain Nagera and Christian Derval, she received her blue belt in 2001. She started travelling toBrazilto train and compete and this is where she received her purple belt at the Behring academy from Master Flavio Behring and his son Sylvio  (2002). Laurence Cousin Fouillat continued her instruction under the legendary Master Flavio Behring, receiving her brown belt in 2004.

On July 2005, Laurence won the Copa do Mundo (World Cup – CBJJO) and medalled at the Mundial (World Championships) being named as one of the strongest female grapplers in the world. Upon her return toParis, in October that same year, she was awarded her black belt in a ceremony led by Saulo Ribeiro and Flavio Behring.

In 2007 Laurence switched camps, though she still represented Behring Jiu Jitsu she decided to start training with François Laurent and David Pierre Louis, with new training partners she trained hard reaching her much desired gold medal at the World Championships.