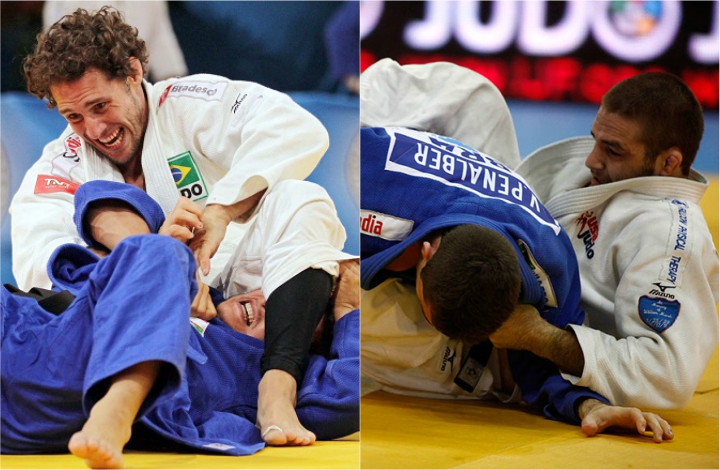 in Judo, the ground game (Newaza) is given less attention than in BJJ. That doesn’t mean that Judokas are not good on the ground. There are many Judokas that have amazing Newaza and would do very well if they transitioned to BJJ. It can be argued that BJJ and Judo are the same sport (BJJ actually came from old style Judo), but a different set of rules is what makes them different.

This list of top level Judokas even has 3 BJJ black belts, and one of them is even a two time BJJ world champion.

Here are the Judokas from past and present, who have the best ground game would have to be, in no particular order: 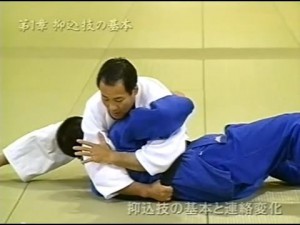 He won the silver medal of world championships in 1975 and gold medal in 1981.

Kashiwazaki retired in 1982 and became national coach in England, Canada, Germany and so on. As of 2009, he coaches judo at International Budo University in Japan. He was knower for his superior ground game and also cross trained in Sambo and Wrestling.

Having broken his arm at the age of sixteen, he found himself unable to use his favourite technique- Morote-seoi-nage any more. He had to rethink his judo and began to study ne-waza, eventually becoming so strong that by the end of his fourth year at Tokai he was part of the team in open-weight events, due to his ability to beat bigger men on the ground.
Kashiwazaki also broadened his horizons by studying various non-Japanese forms of wrestling, travelling to many different countries in the process. In particular he devoted a lot of time to Russian Sambo wrestling- eventually winning a world Sambo title in 1975. 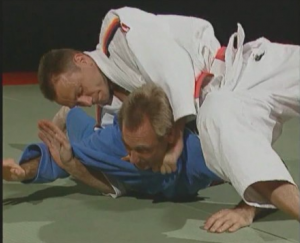 Udo Quellmalz os 1996 Olympic Champion and 1991 and 1995 World Champion. He was performance director of the British team and coached in Austria and Qatar. Double Olympic medallist 1992-1996, 4 World Chs. medals and 3 European medals.
He was revered for his aggressive style and dominant ground game and particularly for his Quellmalz choke. 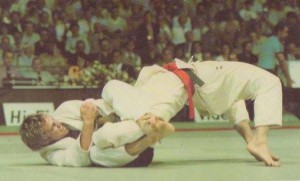 Neil Adams won numerous Olympic and World Championship medals in judo representing Great Britain. Adams was the first British male to win a World title, and the first British male to simultaneously hold a world title and a European title. Other achievements include a gold medal at the 1981 World Judo Championships in Maastricht, the Netherlands, plus silver medals in the 1980 and 1984 Summer Olympic Games and the 1983 Judo World Championships. Adams was also five-time European Champion. On 20 September 2008 he was promoted to 8th Dan at the age of 49. He is known for his ground game (ne waza) and his arm lock.
Check out how to do Adams’ famous arm lock which was taught to Jason Morris, Ronda Rousey’s Judo instructor who then taught it to Ronda: 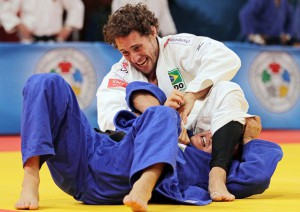 Flávio Canto is a Brazilian judo champion and Brazilian Jiu-Jitsu black belt, who won the bronze medal in the – 81 kg division at the 2004 Summer Olympics in Athens, Greece. He previously competed at the 1996 Summer Olympics in Atlanta, Georgia. Canto won three medals in a row at the Pan American Games: 1995, 1999 and 2003. He is known for his high level ground game and there are many stories of him having dominated many BJJ champions on the ground in training.

In 2004’s there was talk of organising a grappling superfight between Flavio Canto and Ronaldo Jacare (then world bjj champion, who also had a strong Judo background). The project never came to life. 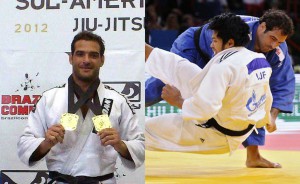 Leonardo Leite is what you might call a grappling phenomenon. in Jiu Jitsu he is a 2x IBJJF black belt world champion and was the first person to defeat José Mário Sperry at black belt back in 1999. in Judo, he was part of the Brazilian national team in the Olympic games in Beijing in 2008 and was silver medalist at World Cup Judo . And in little more than a year fighting MMA professionally, “Leo” accumulated 5 wins and no losses and became light heavyweight champion Legacy Fighting Championship. 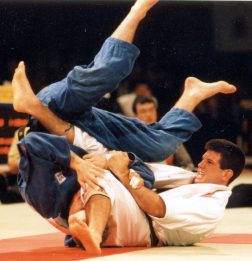 Pedro was the World Champion at 73 kg in 1999, and also won bronze medals in the 1991 and 1995 World Championships. Pedro represented the United States in the 1992, 1996, 2000, and 2004 Olympic Games, winning bronze in 1996 and 2004. His entry in the “Legends” section of a major judo magazine’s web site lists 29 gold medals in international competition. His favorite judo technique is Sode Tsuri Komi Goshi, and his most effective is Juji Gatame. Pedro has a highly respected ground game. 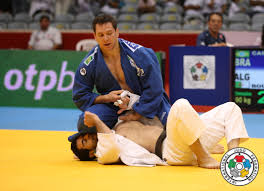 Tiago Camilo won the silver medal in the lightweight (– 73 kg) division at the 2000 Summer Olympics in Sydney, Australia.
At the 2008 Summer Olympics in Beijing, China he won his second Olympic medal, a bronze medal in the category (– 81 kg). At the 2012 Olympic Games, he lost out in the bronze medal match to Ilias Iliadis in men’s -90 kg category.Camilo is regarded as having some of the best ne waza in world judo.

Here is Camilo rolling with ADCC world champion Demian Maia, who is considered one of the best BJJ players of recent times: 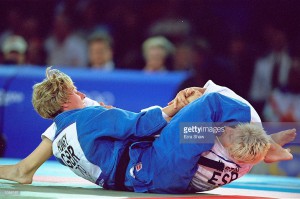 Kate Howey was the 2000 Olympic finallist U72kg. Also 1997 World Champion and 1990 World Junior Champion. Won 8 European medals, 5 world medals and is very infleuntial as a coach of the new British women’s Generation. Was coached by Roy Inman. She was known for her amazing Newaza: 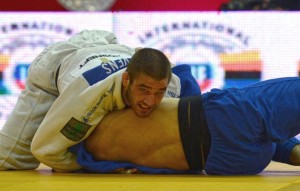 Travis Stevens is a elite level Judoka from United States who competed in the 2008 and 2012 Summer Olympics. He won a silver medal at the 2016 O;ympics in a big part due to his superior ground game. In Judo he has been ranked top 5 in the world and he is considered by many to be the current greatest American male Judo athlete. He has notably beaten Flavio Canto. Travis also holds a BJJ black belt in Brazilian Jiu-Jitsu under John Danaher which he achieved in 18 Months! He was promoted in 2013. He Held the rank of Brown For a Year and competed at Copa Podio, BJJ expo tournament. White-Blue in weeks. Then blue-purple in a month then purple-brown in a few months! 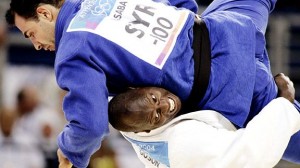 Ferguson is a four time national champion in judo. At the age of 29, Ferguson competed in judo at the 2004 Summer Olympics in Athens, Greece in the men’s heavyweight division. He was previously an alternate in the 2000 Summer Olympics in Sydney, Australia.

He has competed in the best submission wrestling tournament in the world: ADCC where he was able to showcase his explosive double leg takedowns. Unlike many of the judoka in this ranking, Ferguson is ranked in BJJ. His BJJ instructor is BJJ legend Ricardo Liborio. Ferguson as a 3rd degree BJJ black belt is possibly the highest ranked elite level (Olympian) Judoka in BJJ. 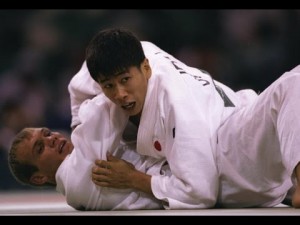 Kenzo Nakamura who won a gold medal at the 1996 Summer Olympics. Nakamura also won a gold medal at the 1997 World Judo Championships and three consecutive victories in the -73 kg division of the All-Japan Championships from 1998-2000. Nakamura’s Ne Waza was so good that it is said that in ground randori with Roger Gracie at the London Budokwai, both champions were tied. 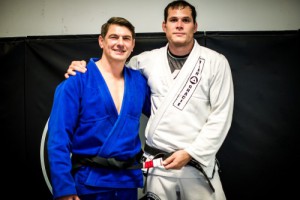 He was never graded in the coloured belts because he studied his Brazilian Jiu Jitsu at The Budokwai where he was a senior instructor and general manager and as a Judo Olympian in a Judo club, he was never asked by Roger Gracie to wear a coloured belt after a lifetime of Judo and Olympic Silver.
He trained many times over the years with Roger Gracie and he wore his Judo Black Belt and Roger wore his BJJ Belt.
Reciprocally when Roger attended Judo Classes (which was weekly at one point) with many international Judo players on the mat Roger wore his BJJ Black Belt as they deemed it inappropriate to ask a multiple world champion to remove his belt. Basically there was an extremely unique situation at The Budokwai-
Olympic Silver Medallist Ray Stevens and Multiple BJJ World Champion Roger Gracie respected each other’s Black Belts in their own arts respectively.
When Ray did eventually earn his Black Belt in BJJ he had been training in the art for the same amount of time it took me to go from white to black so he didn’t get graded quickly.
I believe this unique respect between two of the Worlds best grapplers is completely removed from others who have not spent their time and paid their dues learning BJJ before being promoted to Black Belt for the wrong reasons.
Anyone who has rolled with Ray Stevens will have no doubt he is an extremely talented BJJ Black Belt 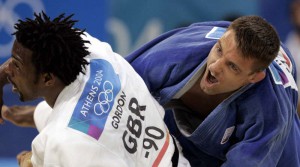 Mark Huizinga  is an Olympic champion. He won the gold medal in the men’s under 90 kg class at the 2000 Summer Olympics by defeating Brazil’s Carlos Honorato by ippon. He took bronze at the 1996 and 2004 Summer Olympics. Other laurels include five European Championships and a bronze medal at the 2005 World Judo Championships. Huizinga retired after the 2008 Olympics.

Made famous in the 2007 Paris Tournament, Huizinga’s roll into Oasekomi is a beautiful piece of Newaza. It’s the reverse omoplata in BJJ: 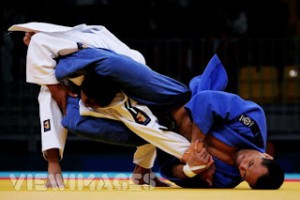 John Baylon is one of the most decorated judo players ever to come out of south east asian region, with a record of 9 SEA games gold medals (the highest in a single medal sport) he has twice represented the Philippines at the Olympics
and been a medalist in the worlds masters, asean and asian games.
In addition to his judo skills John is also a black belt in brazilian jiu jitsu under clube de jiu-jitsu in japan. John is the first person from the south east asian region to hold a kodakan judo black belt and a bjj black belt.
John been both a national bjj and multiple national open judo champion. In 2008 in a Judo tournament in the Philippines, Baylon famously submitted Pan Am champion and famous BJJ black belt Mike Fowler by Ude Gatame armlock.