Which Techniques Should You Learn FIRST As A BJJ White Belt? 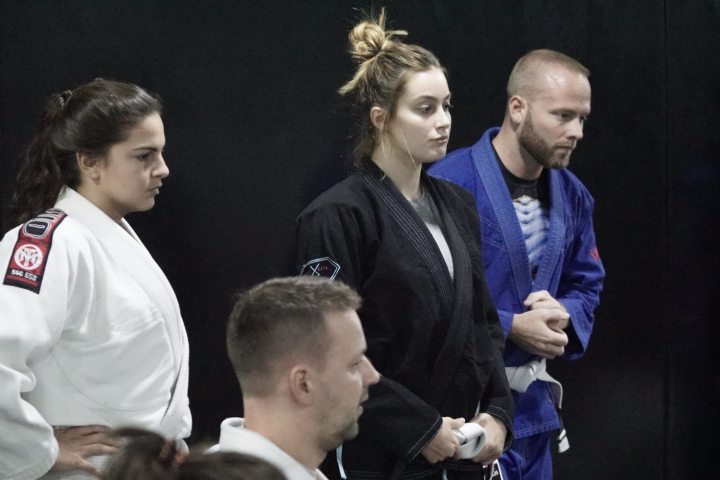 It’s so easy to get confused as a white belt in BJJ! There are a lot of techniques out there, and you’re excited about ALL of them. Choosing which ones to learn first… Can be a difficult task.
So let’s make it easier! Here are the basic techniques from the most basic positions, that you should begin with.

Attack: arguably the easiest attack you could learn is the Cross Collar choke. Learn it from Mount position, and it’ll translate well into other positions, too (Closed Guard, for example).
Roger Gracie is the undisputed expert in this technique. So, watch Rob Biernacki demonstrate how to set it up like Roger – with both the basic and a bit more advanced details – on the video below:

Defense: being on the receiving end of the Mount is terrifying. Luckily for you, there is one really simple and easy-to-learn escape; which you won’t use only at the white belt level, but as you progress through the ranks as well.
Andre Galvao shows how to set it up with tremendous effectiveness:

TECHNIQUES FROM THE BACK

Attack: being on your training partner’s back is the best position you can have in BJJ. And the most powerful submission from it is the Rear Naked Choke!
Perhaps it’s best for you to immediately learn how to do it in both No Gi and Gi. Here’s Lachlan Giles explaining it in the No Gi situation, and Roger Gracie showing some neat details to setting it up in a Gi:

Escape: as soon as you find yourself with your back taken, you need to start escaping. Nick „Chewy“ Albin demonstrates the most basic escape here, with a neat transition to Single Leg X or Butterfly Guard:

Attack: let’s combine some sweeping with some triangle-ing action! The easiest sweep from Closed Guard you could learn is the Scissor Sweep. However, even though it is easy, it still requires some details to make it work…
Chewy will demonstrate them for you – as well as how to set up a Triangle from a failed attempt!

Defense: when you’re the one that’s stuck in Closed Guard, your primary goal needs to be to GET OUT as quickly as possible! That is, you need to break the Closed Guard.
Now, there are multiple ways to do this, but here’s a really efficient one:

TECHNIQUES FROM SIDE CONTROL

Attack: if you’re totally new to attacks from Side Control, the versatile Kimura is going to be your best friend. Learn how to make it work from here, and you’ll be able to translate it into other positions as well!
John Danaher teaches how to do it:

Defense: ESCAPE as soon as you can! If you don’t, your training partner may go for a submission… Or for a transition to Mount.
Yet again, the geniousness of John Danaher demonstrates how to do it, with some details that will put you ahead of the average learning curve:

TECHNIQUES FROM HALF GUARD

Bottom Half Guard: being in bottom Half Guard can either be a blessing or a curse – depending on how good you are in using it. Here are a couple of great, basic pointers on both attacking and defending from the bottom:

Top Half Guard: when in top Half Guard, your first instinct should be to pass it. Here is a great approach to doing so: