Which Takedowns Should I Use In A Street Altercation? 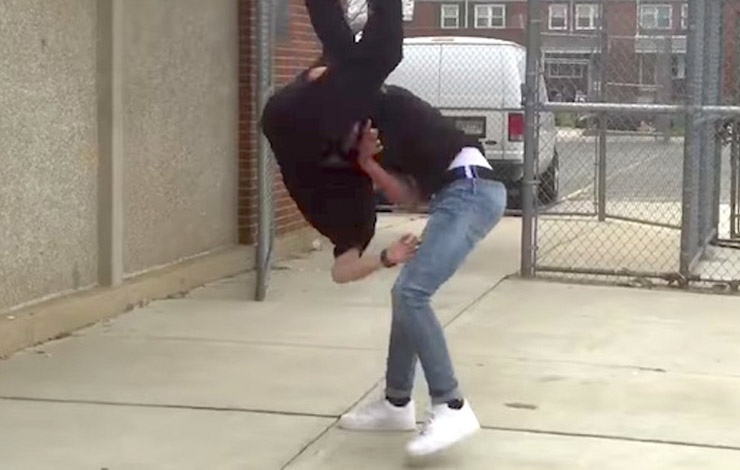 Takedowns are always a great addition to your Brazilian Jiu Jitsu training! After all, as some of the nay-sayers would say – but rightfully so – if you can’t take the fight to the ground, how are you supposed to get your opponent into the BJJ realm?
This gets even more important in the case of street fights. But, which takedowns should you use if you ever come across the need to defend yourself?

Eli Knight shares his take on the subject.

WHAT TO STAY AWAY FROM

Eli begins with a few thoughts that you should definitely take into consideration. He points out that you need to know which types of takedowns you need to stay away from. Because, think about it – if you’re in a street fight situation that is happening on concrete… Should you really go for throws that have you hitting the floor hard? Or, should you really go into that Double Leg takedown with your knee planting onto the concrete surface?
All of this could lead to some very serious injuries on your behalf as well, no matter if the throw or the takedown has been successful in and of itself.

Additionally, it pays to mention that you should also think about the legal consequences of your takedowns. Certainly, if a situation ever arises for you to protect yourself, you should absolutely use the skills which you were taught in training. However, that doesn’t mean that you should Blast Double the other person head-first onto concrete; unless you want to face some serious legal repercussions afterwards and possibly end the person’s life.

Therefore, by taking Eli’s point of opting for the takedowns which don’t carry as much risk for your own injuries – and combining it with the common sense one, in regards to legal repercussions – let’s take a look at three takedowns you can use in a pretty safe manner in a street fight; all of them starting from one of the three clinch variations.

STREET FIGHT TAKEDOWNS FROM THE CLINCH

The first type of clinch is the truly forward one. Eli explains that, as you get into a sort of an overhook-underhook situation against the other person and establish a clinch from there, you’ll first look to offbalance them to the side (the side where you’re setting your throw at). As you’ve done this, you need to lower and turn your hips away from them, placing your foot next to theirs; so that your tailbone rests against their upper leg.
Then, as you pull their arm across and down from you, execute the Hip Toss – and your opponent will be down on the ground.

The second type of takedown you can do is when you have the front clinch, but the opponent is going away from you. In this case, you can step in close to them, making sure to utilize your forward energy into them: so as to get more of their running-away decision. Then, you’ll simply perform a small outside trip and take them down.

And thirdly, if you get a hold of them with a side clinch; squat down and up quickly so as to pop up behind their back. Then, press into them so that they buckle down a bit as a counter. Now, when they do this, you’ll use the two-on-one grip (which you’ve established back when you had the side position) to press it into their hip and pull it backwards. This will take them down and will leave you in a really dominant position.

Watch Eli demonstrate these three takedowns from different clinch scenarios in much more fantastic detail below: