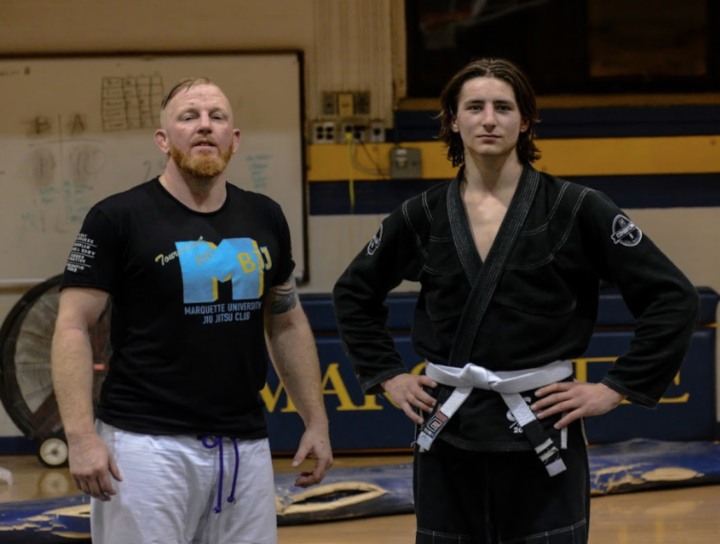 In 2018, roughly 8 million people tuned in to watch the NCAA Wrestling Championships.  Those numbers proved immediately that the market for televised grappling exists, and is stronger than we grapplers once believed. To Chris Martin, promoter of both MMA and BJJ events with Nova Gyms and head coach of the Marquette University Jiu Jitsu team, those numbers are tantalizing.

This past weekend, Martin helped host the first ever Collegiate Jiu Jitsu Dual in hopes of getting the collegiate jiu jitsu league off the ground . A common interest in increasing access to combat sports at the collegiate level which brought Martin and the NCWA together a year ago, while Martin was hosting a series of “Jiu Jitsu Scrimmages;” smaller local events that provided low-stress opportunities for competitive matches against people outside their gyms. This past weekends pilot event increased the intensity significantly, pitting Marquette against a talented team of grapplers from Northern Illinois University in a team -based duel. “This first event seeks to tap into the collegiate sports market and bring jiu jitsu to the mainstream” said Martin.

Martin has held jiu jitsu “scrimmages” in the past, allying with local gyms and other collegiate jiu jitsu clubs, wanting to provide an outlet for casual competition for his students.  Although his “scrimmage” system proved to help the students build a solid foundation for their jiu jitsu, Chris Martin has always had loftier goals. “These athletes are in their athletic prime, and the college sports market is huge. It makes sense to give them an opportunity to compete, and to bring that competition to the college sports audience”. said Martin.

regulation. In perhaps the most interesting aspect to the ruleset, competitors were allowed the

option to choose whether they wore a gi or rashguard and shorts. Martin referenced his love of

the early UFC events as inspiration for the choice. “Early on in MMA”, he said, “You would see

Royce Gracie out there in a gi and there was no problem. Nobody forced you to wear anything

specific, and it made for great matchups, so by allowing either gi or nogi uniforms, it became a

strategic choice. You could use your gi, but you could have it used against you. You could just

wear a rashguard and shorts, but you have fewer tools.” This strategic element did produce one gi versus nogi match, with NIU’s Ryan Lenartz (nogi)  finishing Marquette’s Andrew Salinas (gi) with a slick arm triangle.

Martin notes that not all members of the team were able to compete due to the scope of the event (NIU had only five competitors); notably, Marquette jiu jitsu club president Matt Leonard abstained from competition until the end to allow all freshman competitors an opportunity to participate. Competitively it was a bold move but Martin said the decision also held true to his overall vision of contributing positively to the jiu jitsu community, which he held more important than individual competitive victories.  Matt Leonard found BJJ through the Marquette club and is now finishing his sophomore year at Marquette, Martin looks to groom his pupil into not only a competitor but a better leader and instructor in his own right. “I really want to get this league off the ground so Matt can compete on a big stage when he is a senior, so we have two years to build this thing” said Martin.

As the tournament got underway, Northern Illinois won the first three consecutive bouts, forcing Marquette to battle back to a razor thin team victory. True to Martin’s prediction, the competitors were aggressive and determined, with 8 of the 9 total matches ending in submission within the regulation period. Both Martin and NIU’s coach Kyle Munsayac were very pleased with the event. Munsayac commented “I thought this event was great. I hope we can continue to grow and meet again.”

One regional conference is now established in this new endeavor. NIU and Marquette’s dual begins competition in the “Great Lakes” conference, but other schools are indicating their interest and Martin hopes to not only grow competition locally, but to spread the format and NCWA support to other areas, with the eventual goal of a national championship tournament. The program is still small and challenges remain, but Martin is determined. “Now that we have one successful tournament under our belt, we can learn and grow, and start to add additional clubs as well as seek out corporate sponsorship, and begin to build an audience by streaming or filming and uploading matches so that people can see what we’re doing.” Other schools are following Martin’s lead, with a planned Scrimmage style event taking place between the University of Maryland and the Jiu Jitsu team from the US Naval Academy in a few weeks. And Martin is confident that this is only the beginning.

If you are part of a college jiu jitsu club or program and would like to get involved in this emerging league, contact Chris Martin at chris@novagyms.com or @Bizjitsu on Social Media.