What To Do If You’re a BJJ Blue Belt – And You Get Destroyed by a White Belt? 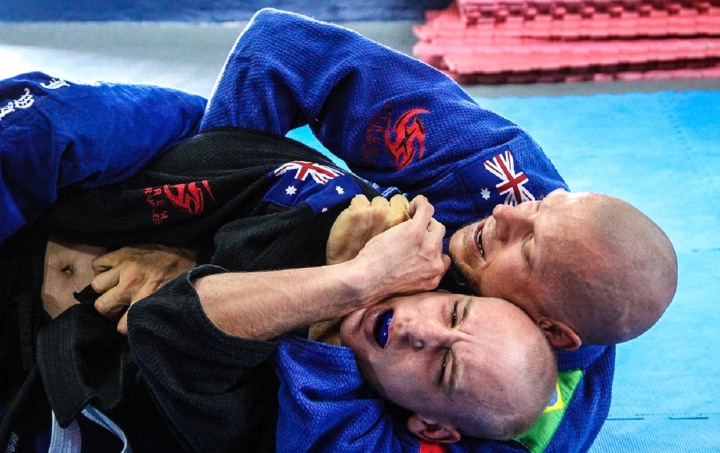 First of all, well done – you’re a blue belt and you’re still training! You haven’t quit, and that’s a huge achievement in and of itself… But what if, just a couple of hours ago, you managed to lose to a white belt?
What are you supposed to do? How are you supposed to approach this whole horrifying ordeal? Is there any hope for your Jiu-Jitsu or is your instructor expecting you to quit?

Hear us out on this one: it’s no big deal. Here’s why.

No, we really mean it – don’t fall into despair if you lose to a white belt. You may be tempted to think of yourself as a lesser grappler, as someone who doesn’t have any Jiu-Jitsu skills whatsoever. However, trust us on our word: that’s far from reality. Whether or not you tap out to someone doesn’t mean you’re worse than you used to be.

But do you know what could *possibly* make you worse? Your attitude. If you let negativity over something as simple as tapping out devour you and your love for BJJ… You’re probably going to start lagging behind.

„Yeah man, I was just letting you work“ is one of the many types of excuses you could use when you lose to a white belt. But this does nothing; you’ll still have tapped out to a white belt, and you’ll possibly ruin their moment of pride.
Instead, congratulate them on their win. Shake their hand, give them a high-five, give a bro hug; or just slap and bump, continuing with the roll. That’s the honorable thing to do.

WHAT CAN YOU LEARN?

If you want to be productive about your „lost match“, then you should think about what you can learn from the experience.
How did the white belt catch you in the submission? Which mistakes did you make and what did they do well? What should you do differently next time, to make sure that you perform better?

Your primary objective in training should be learning new things, not winning. Reconsider and reorient your mindset.

NOT THE LAST TIME YOU’LL LOSE

This may be the first, but it most certainly will not be the last time you’ll lose to a white belt. And so what? If you’re going to measure your attitude towards BJJ strictly by the amount of times you’ll lose and win against lower belts, then you’re not going to fare far.
Once again – it’s imperative that you lose this win/lose mentality in training, and acquire the learning one. This alone will do wonders for your Jiu-Jitsu.

YOU DON’T GET MAGICAL POWERS…

… Once that belt is tied around your waist. What’s the difference between a freshly minted blue belt and a 4-stripe white belt? It’s not a big one for certain – except from the fact that the blue belt now has a target on his back.

Skill matters more than the belt. You didn’t lose to a white belt, but to a (possibly) better Jiujiteiro than you are. That means that you, too, could become better than you already are.

At the heart of Jiu-Jitsu lies unpredictability. Anything can happen at any moment of a roll; you or your training partner could make a single mistake that will end up with one of you losing, regardless of what the score was beforehand.
Therefore, don’t think too much about it. Embrace the unpredictability of Jiu-Jitsu instead. It’s the way that Arte Suave works, and the most that you can do is to be meticulously preparing for it.