What Is Greco-Roman Wrestling? 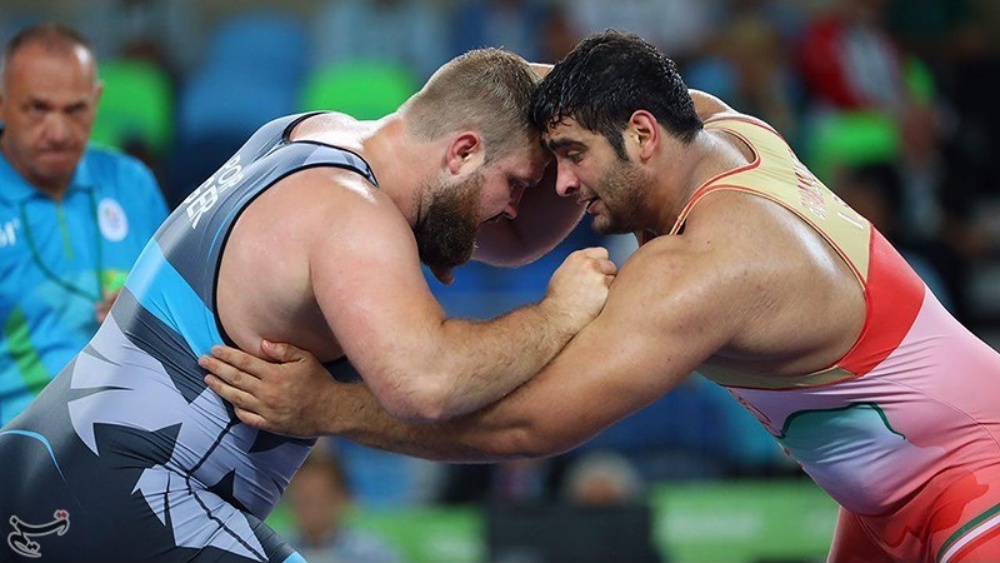 Greco-Roman wrestling is one of the oldest sports in the world, dating as far back as 3000 BC. It was featured in the ancient Olympics as far back as 308 BC and restored in 1896 when the Olympic Games were reintroduced. It has been a regular part of the Olympics since 1908, over a decade before freestyle wrestling became a regular event at the Summer Games.

Greco-Roman wrestling has been an exclusively men’s only event at the Olympics, which isn’t the case for the freestyle version. A German named Carl Schumann won the first Olympic Greco event in 1896 and three other events that year.

Since then, countries like Russia, Turkey, Romania, South Korea, Japan, Finland, Bulgaria, and Sweden have dominated the sport.

Everything You Should Know About Greco-Roman Wrestling

Greco-Roman wrestlers rely on using their upper bodies only to gain an edge on the mat. Matches start with both fighters standing, and they have to rely on throws and suplexes since they can’t shoot for their opponent’s legs to score takedowns.

Using techniques that involve grabbing an opponent’s legs in Greco-Roman wrestling leads to fouls that do not exist in freestyle wrestling. For example, Greco-Roman wrestlers are penalized for blocking or making contact with their legs when executing throws. Warnings are given the first time leg fouls are committed by the offensive fighter. One-point deductions and cautions are issued for subsequent infractions.

When leg fouls are committed while on the defensive, the wrestler is automatically given a caution, and their opponent is awarded two points. A second infraction leads to the guilty party losing the fight.

Greco-Roman wrestling also requires wrestlers to follow their opponents to the ground to score points for takedowns.

The Rules And Scoring System Of Greco-Roman Wrestling

Like most styles of wrestling practiced worldwide, the main objective of a Greco-Roman wrestling match is to accumulate more points than your opponent at the end of the designated time frame or to pin both of your opponent’s shoulders on the mat to win the match.

A match often consists of two three-minute periods with a 30-second break between halves. Participants score points by executing legal takedowns, throws, locks, or holds, or they can win outright by scoring a pin. The pin has to be held for a sufficient duration to achieve instant victory.

The points awarded for each technique vary based on its difficulty, with the more complex techniques, like a grand amplitude throw that ends with your opponent in a position that exposes their back to the mat, scoring up to five points. Such techniques that involve picking up your opponent, throwing them to the ground, and controlling them earn you the most points.

Points can also be earned by reversing defensive positions and gaining control over your opponent. Greco-Roman wrestlers also earn points when their opponents commit infractions that result in cautions. Scoring is cumulative in Greco-Roman wrestling, meaning points are tallied up at the end of two periods, and the participant with the higher score is declared the winner. 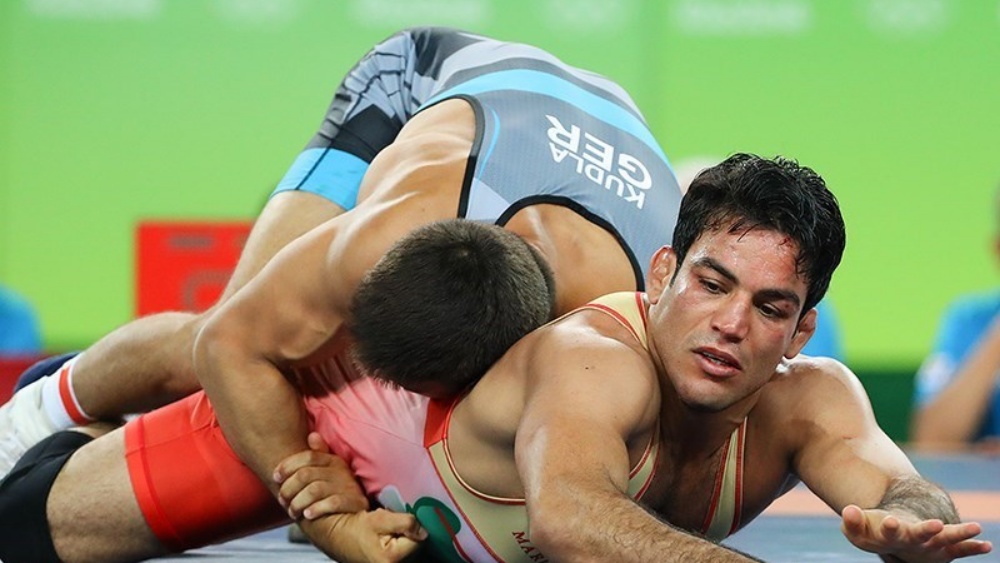 A wrestler is said to be passive when they are content with trying to neutralize their opponent’s active attacks instead of looking to execute throws, locks, or holds. Wrestlers can also be deemed passive for being evasive or reluctant to engage.

In a par terre position, the wrestler being penalized lies down at the center of their mat on their stomach while their limbs are stretched out and touching it. The position gives the active fighter a significant advantage, serving as an effective deterrent to passivity. The active fighter can pick any side in this position and put their opponent in a hold before the match is restarted.

Modern Greco-Roman wrestling was developed to be as similar as possible to the ancient wrestling style practiced by Greeks and Romans thousands of years ago. Back then, wrestlers oiled themselves up and wrestled naked, but you don’t have to worry about doing all that these days.

Modern Greco-Roman wrestling incorporates countless techniques from European folk wrestling. Its modern roots date back to 1848 when a French soldier named Jean Exbrayat showcased his skills at events and fairs, naming his style “flat hand wrestling.” He later added rules like not allowing techniques that allow grabbing on an opponent’s legs. It is believed the modification was made to make the sport less dangerous.

Greco-Roman tournaments became popular in the 19th century as tournaments were held all over Europe. Some rulers, like Russia’s Czar, even offered significant cash incentives to fighters who competed for them. The prestige and popularity of the sport all across Europe earned it a spot at the modern Olympic Games when the event was reintroduced in 1896. It was the first wrestling style to be included in the Olympics, and it’s been a part of the Summer Games ever since then, except for 1900 and 1904, when freestyle wrestling was first introduced and took its place.

Some of the advantages Greco-Roman wrestlers have in mixed martial arts include:

The upright style of grappling Greco-Roman wrestling emphasizes transfers well to clinch fighting in mixed martial arts. Battling for underhooks and using overhooks correctly is second nature to most well-trained Greco-Roman wrestlers. Their unique understanding of this position allows them to dominate clinch positions even when competing against high-level wrestlers from different styles.

Once in the clinch, Greco-Roman wrestlers have countless takedowns, throws, and suplexes they can use to get their opponents on the ground.

Greco-Roman wrestlers being used to fighting in the clinch also allows them to wear opponents down from the position. Clinch fighting is one of the most tiring aspects of mixed martial arts, and it doesn’t take long for it to burn out your hands. MMA legend Randy Couture was famous for using his Greco-Roman wrestling to pin opponents to the cage and wear them down during his fights.

Wrestlers from freestyle and other wrestling backgrounds that allow you to shoot on your opponent’s legs tend to shoot carelessly when they transition to MMA since they aren’t used to dealing with weapons like knees coming at their heads or opponents looking for guillotine chokes. This can lead to bad habits that are extremely dangerous in mixed martial arts.

One of the best examples of this is former ONE Championship welterweight champion Ben Askren’s fight against Jorge Masvidal. Masvidal charged at Askren after the opening and threw a wild flying knee. Askren’s wrestling instincts kicked in, and he dipped his head down to shoot for a takedown to counter the attack. That put his head right in the way of Masvidal’s knee, leading to one of the most brutal knockouts in mixed martial arts.

Greco-Roman wrestlers don’t have to worry about getting kneed in the face while looking for takedowns since they don’t have to put themselves in vulnerable positions to score takedowns. They can simply clinch up with opponents and put them on their backs from there.

While Greco-Roman wrestlers might be better known for their high amplitude throws and slams, they are just as adept as any style of wrestlers at controlling bodies on the ground. Fighter score points for ground control in mixed martial arts, making it an effective way for wrestlers to win rounds.

The main weakness of Greco-Roman wrestling in mixed martial arts is the lack of experience dealing with attacks that target the lower body. This makes them vulnerable to many trips and takedowns used by wrestlers who practice different styles. A Greco-Roman wrestler in mixed martial arts might be taken down by less accomplished wrestlers simply because they aren’t used to doing basic things like sprawling out of takedowns.

Greco-Roman wrestlers also lack experience in certain aspects of ground fighting, like submissions and dealing with positions not used in wrestling, like the Brazilian Jiu-Jitsu guard. Also, as is the case for other grapplers transitioning to MMA, their striking game is typically nonexistent.

The most successful Greco-Roman wrestlers who transition to mixed martial arts also train in freestyle wrestling and other grappling styles like BJJ to adapt their skills for their new sport and learn how to strike. It’s typically an easy transition for them since they already have an affinity for grappling.