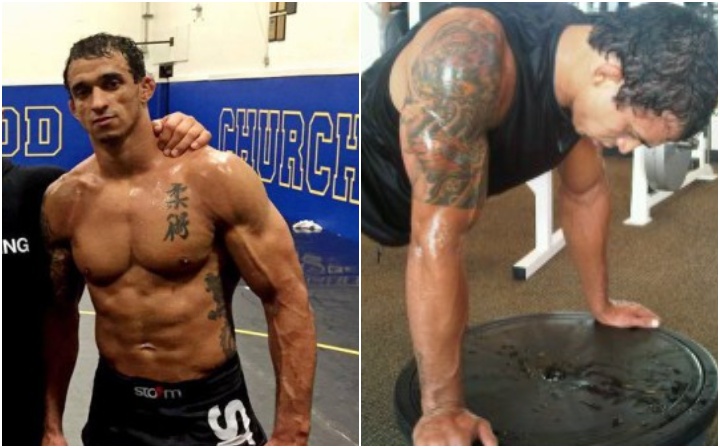 Case study: Eiður Sigurðsson, Brazilian Jiu-Jitsu competitor and a purple belt under Gunnar
Nelson.
Eiður came to me a good year ago, for rehabilitation and strength conditioning.
He had decided to go all-out and make it count: take a professional approach and work hard at
his sport, to go as far up in the ranks as possible.
That’s the kind of athlete I like to work with: the right attitude can create real results and make a
true difference.
He’d had some lower back issues in the past, which somewhat restricted our options as far as
exercise selection to begin with, but I assured him we would rehabilitate him and improve sports
performance both at the same time.
Eiður also had a tall, lanky frame, immediately making it clear that kneestability
and solid core-strength would be a priority.
Injury prevention and rehabilitation are a hugely important part of any strength program worth
it’s salt.
The GPP (General Preparatory Phase, the first phase in the program) is designed to build a
solid foundation -preparing the athlete for what’s to come- and to injury proof him as much as
possible.

Rehabilitation from injury on the other hand is -generally speaking- 50% rehabilitory exercises
and 50% specific therapy, like Graston and Active Release Techniques.
So for this athlete, priority would be given to rehabilitating the lower back and careful overal
strengthening in a very sport specific way.
Side note: in the past, some would argue that strength is not important for the sport of Bjj.
I think by today we all know better: quite apart from the above mentioned injury prevention and
rehabilitation, we can see how strength, endurance and power play into the competition results
big-time.

Simply put, at the same weight and skill level, the stronger competitor will likely win.
Back to Eiður.
For the therapy-part, we focused on releasing his psoas, adductors and hamstrings. Plus I sent
him to the best spinal and postural therapist in town -Jói Kef, who also works with Gunnar
Nelson.
For the training, his lower body workouts would evolve around strengthening the lower back and
the knees, whilst not popping his lumbar spine in the process.
That meant that deadlifts were out, and Olympic squats would have to wait as well.
Not a problem, we have plenty of effective tools in our box.
Lots and lots of VMO-strengthening exercises like split squats, pistol squats and cyclist squats
etc took care of knee stability.
For the lower back, it was the reverse hyper bench all day long.
reverse hyper
This genius piece of equipment has helped countless athletes rehab their backs and improve
performance at the same time.
OK so now a good year later, what are the results?
Eiður’s lower back is fine.
And on the mat, he’s taking names.
Before we began, he tended to lose the international competitions in the first round…
About 8 months into the program, he started to dominate.
He won a fight at the World’s in L.A. this year, 2015. At the Los Angeles International Jiu-Jitsu
Open he won Bronze and Silver in the Gi, next day double gold in No-Gi: his weight class and
the opens.
Recently he won Bronze at the Finish Open No-Gi, in spite of being under the weather with a
heavy flu.
It’s going good, and things will only be getting better.
With the right mindset and the right tools -including professional strength conditioning- you will
reach the peak of your athletic potential.

Written by Mark Kislich, an Olympic Performance Coach and Judoka. You can visit his site here:http://www.markkislich.com/. Mark has also come out with a great DVD set: Bulletproof Your Shoulders for Judo.