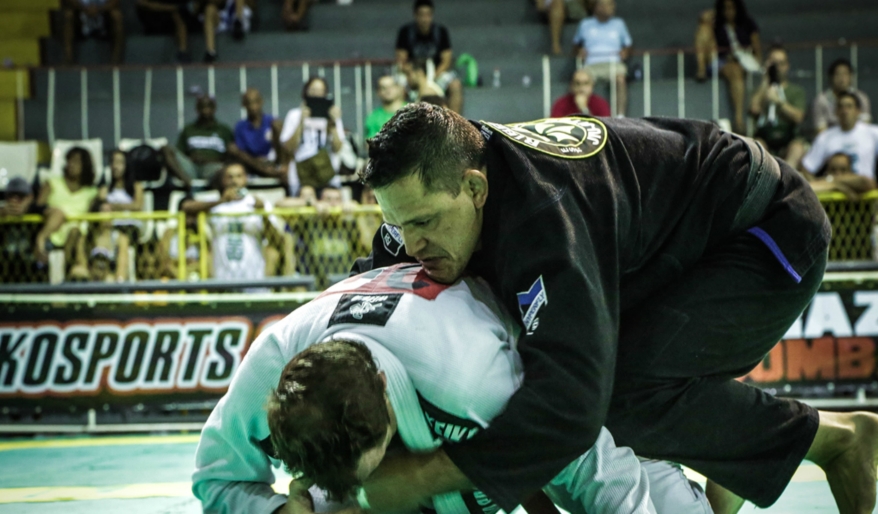 Guest post by Neil Adams MBE, an English judoka who won numerous Olympic and World Championship medals in judo representing Great Britain. Adams was the first British male to win a World title, and the first British male to simultaneously hold a world title and a European title. Other achievements include a gold medal at the 1981 World Judo Championships in Maastricht, the Netherlands, plus silver medals in the 1980 and 1984 Summer Olympic Games and the 1983 Judo World Championships. Adams was also five-time European Champion. On 20 September 2008 he was promoted to 8th Dan at the age of 49. He is famous for his ground game (ne waza) and his arm lock (that won him the world championship).

Adams has released a new series of Judo instructional entitled ‘Essential Judo‘ which is a revolutionary & highly detailed way of teaching the art of Judo.

Judo is a sport that can come across as having a very limited ground or Newaza game. This most certainly is not the case, however as in anything the rules of Judo have dictated how tactics and techniques have evolved.

Due to the evolution of sport we have seen the art of Newaza or ground fighting taken to new levels by BJJ, however, others are now gaining popularity such as Sambo, Submission Grappling and even Catch Wrestling are enjoying an increasing cult following. It is clear that the thirst for ground grappling is still strong.

When we look at Judo many are keen to dismiss the rules as limiting ability in some way, as if the reduction in time allowed on the ground decreases the skill of the player. The truth, however, is that it is not a limitation of ability, rather a laser focused approach whereby time is of the essence. The time on the ground in Judo is similar to the boxer looking for a big KO to win a fight.

If we look at the hierarchy of positions that exist in BJJ such as the guard, side mount, mount, etc. We see that this is an art that places a very large amount of its focus on moving through the positions, and I believe the win is reflected by means of an eventual submision.

In Judo we are not rewarded for moving through the positions, we are only rewarded for dominance on the ground, be it holding a position past the legs or gaining a tap out. So in essence Judo completely bypasses the need for an overly complex guard passing game in favour of using throws to land in a position of dominance.

Take Osoto Gari for example. A good Osoto as seen in the video below lands the player in the perfect position to capitalise in Newaza. If we look at the BJJ matches we see a lot of takedowns that land the player in the guard, of which they then have to pass. The Judo rules totally take this out of the game.

In essence which is more efficient? Is it better to learn how to throw so that you can end in a more beneficial position or just learn to do a takedown that puts you in the guard? In BJJ, this is crucially important because opponents are highly trained to fight off their back and are very good at chokes, and armlocks from that position, so why would anyone give their opponent this opportunity? It seems the logical thing to do that BJJ players should improve their Judo skills, those that do will certainly be able to spend less time in the Guard of an opponent.

Earlier on I talked about the laser focused Newaza in Judo. BJJ players can benefit from training Judo Newaza if they look at transitions.

Transitions are something I have heavily focused on myself. As we can see from footage of my fights, I do not go to the ground and think “hmmm what technique should I go for now.” The second I land I am hunting for a technique that will finish off the opponent. I am not thinking about points; I am focused on finishing the match.

My armlock shows this perfectly. I land and transition into Newaza at speed, hunting for the arm. Take a look at the videos below for examples of this.

How BJJ Players Can Improve Their Newaza

All matches start standing; they do not start on the knees yet most BJJ and Judo schools train Newaza as if it was a separate sport to their own. Instead, you should think about focusing on the transition and making this as effective as you can. For BJJ coaches, this starts with the standing work.

If you are coaching BJJ, Judo is a must to add to your repertoire and many BJJ experts such as Roger Gracie have done this, and you can see in this short video Roger teaching Ippon Seoinage to his students.

A lot is written about the benefits for Judoka training in BJJ for their ground game. I have previously written myself that I agree with cross training, but it goes beyond time on the mat. The actual fast paced rules of Judo can help BJJ players to become submission hunters on the ground rather than playing for points.

A great way for BJJ and Judo players to improve their groundwork is to practise techniques from a throwing position and then transition into ground work from there.

It is surprising how many different opportunities occur for transition into ground work when opponents are actually trying to throw each other.

In this situation you do not actually start your groundwork training from the ground, you start off on your feet and throw the opponent to the floor and then go into ground work. This is as close to a contest situation as possible.

You can also train from failed throwing positions, so you will throw your opponent to the floor but in this case the throw does not go to plan and he or she might land on their front, as they land you have to go into ground work. You are only limited by your own creativity in designing situations.

With these drills you need to place a time limit onto the situation, this is how you become a ‘hunter’ of the submission. Time is short, so you need to try and get the submission within that time frame. This is key to being able to quickly spot opportunities on the ground in a contest situation.

In longer groundwork sessions focus on catching a technique until you can no longer get that same one technique on your opponent, then move on. Only when it becomes impossible to land, do you move on to trying another technique. This focus will also help to turn you into a submission hunting machine.

I have always believed in cross training however the door does swing both ways. BJJ can learn a lot from both the standing side of Judo and also focus their skills with the ways in which Judoka transition from Tachiwaza to Newaza.

It is the Judoka or BJJ player that cross trains regularly that will reap the benefits of both sports and improve their skills. The sports will never be the same due to the rules. Once a BJJ match hits the floor, it stays there but imagine the BJJ player who could finish fights within minutes due to being perhaps just 10% better at throws and transitions.

Judoka can benefit from training in BJJ for a lot of reasons but the Judo ground game also has a lot to offer for the BJJ player.