What Does The Way You Roll Say About Your Personality? 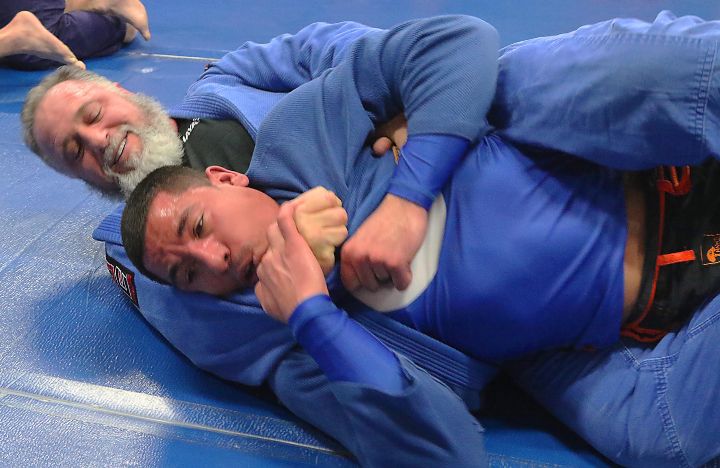 Can you determine someone’s personality by the way they roll in class? And if not, what can you determine?
Some people I’ve encountered think that personality transfers completely into one’s Jiu-Jitsu game. This seems like a likely hypothesis but there’s only one problem. Socially acceptable behavior changes between the walks of life and significantly varies from welcome behavior in the academy. Additionally when we factor in gender roles and occupational obligations we get a significantly different picture.

Motivation
Think about how a person picks partners on a free roll. There’s a type of person that goes for the purple belt (even though that’s not completely kosher if they are a measly white belt) and there’s a type of a person who will go straight for the weakest person in the room (shortest, effeminate or an actual woman) – ego factors in a lot. Even if someone is smart and perceptive they might be tempted to give themselves that ego stroke of victory. All of this factors into strategy. Setting goals for self-growth is very important for developing a bjj game.

If you set your sights too high up the food chain you might end up selling yourself short because there’s a bigger likelihood an opponent will get out of a submission and you’ll end up with a misconstrued idea of your own efficacy.
Further if you choose an opponent you deem weaker then yourself there’s likelihood you’ll be severely disappointed in yourself. This is something I’ve often noticed in guys who are just starting out. As a lanky female in a gym plenty of newbies seek me out after they get demoralized working with other men. Then when I do finish you can see the light going out of their eyes a little bit. I’ve talked a little bit about this before. Alternatively playing a winning game against a weaker opponent just for the ego stroke of it all is very unrewarding and shallow.

Ideally you’d need to balance these experiences and to try and not take it personally. Compare yourself to a version of you that was just starting out as opposed to expecting to grow as much as any other person in your class.
Jiu-Jitsu is as much about personal philosophy as it is about your psychology. You provide the framework to shape the experiences you go through. Never lose sight of that.

When observing these different types of individuals I can’t help but have a lower opinion of the type that always goes for the easy thing because I consider them lacking in the intelligence department. It makes no sense to come to class and refuse to challenge yourself and it further reduces motivation.

But this also isn’t a valid judgment of practitioners who work in high stress environments because they might be more tempted to go outside their usual range and just go super easy for once. The most influential contemporary theories of intelligence postulate that intelligence isn’t the same thing for different people in varied situations. However it does say that being intelligent means knowing how to both recognize and use your advantages and further compensate in areas you’re lacking in. And this is exactly what jiu-jitsu demands of you. You can’t adapt anybody else’s game- you have to find what works for you and how to capitalize on it. This is exactly what differentiates the names we all know from other competitors.

Marcelo Garcia is famous for this. He has the ability to lure the opponent into playing his game and that’s exactly what makes him superior. You’ll often hear his opponents claiming they got pulled into his game and from then on it was over.

Jiu-JItsu is very cerebral – it depends just as much on how the opponent perceives you. This is why I don’t think it transfers aggressiveness as much as – let’s say determination. You hear stories about Gracies all the time. One in the memorable range is them telling you how they will finish you and then following through on that promise. This is a game of confidence and determination more than anything. You need to have faith in yourself to be able to pull this off. This is where real life stubbornness kicks in. Setting a certain goal in sight and then fulfilling it is a very rewarding experience. Being realistic while determined also won’t hurt, chances are you’ll fall short of the Gracies on the timeframe you achieve your goals in but nevertheless you’ll get there and the journey will be just as rewarding as the goal.

When observing other players you can really tell who is determined. This doesn’t directly relate to aggression as much as it’s the epitome of that one guy that loses time and time again and dusts off in record time and keeps going at it with maximum intensity.

You can spot the difference I’m talking about in two rolls featured in this clip:

Consider this: guys who take too much risk can’t stand anxiety and uncertainty. This is blatantly obvious if you watch a Jeff Glover interview. He’s like a bunny hopped up on Ritalin. Tremendous fun, but can he really stand the pressure that comes with being a front runner? His matches have progressively become more fun and less victorious over the years (although much much more fun).

I would think that things /situations we’re trying to avoid end up shaping us much more than the things we try to pursue when it comes to jiu-jitsu even if the term anxious doesn’t really apply to us. This is especially relevant for beginners.

When observing anxious opponents you’ll often find they tap before you actually finish the setup. Other times they’ll get jittery and try to talk to you in the middle of the roll. This is probably the biggest real life indicator of a person because these are the types of behaviors where the person can’t help themselves and just have to release pent up energy. Anxious individuals are often especially timid about being choked.

Another theory that can prove to be valid framework in a bjj environment is Cloninger’s tridimensional personality theory. This specifies that neurochemical transfers in our brain determine how we respond to a specific stimulus we may experience. Cloninger offers 3 temperament dimensions to aid in describing behavior: reward dependence, harm avoidance and novelty seeking. Unlike many terms in psychology these are pretty self-explanatory (disregarding neurobiology involved). For example, reward dependence can make all the difference between an altruistic warm opponent versus a detached tough minded one. It’s interesting to consider our game might be influenced by neurochemistry more than or as much as it is with our personality.

It can be a funny mental game to look at your training partners trying to figure out their personalities. This might as well even help you choosing who to roll with and what kind of game might suit better for you to work against if you want to improve a specific set of skills in your BJJ strategy.
It doesn’t mean tough that a specific kind of personality is better for Jiu-Jitsu than others, so don’t get caught in this idea. Obviously some styles of games might be more effective against other and not necessarily your personality will always be attached to a specific way of rolling. You basically must go through trial and error and figure out what works best for you, as well considering your body type, injuries, physical attributes and other details.