What does the CHANT at Brazilian Jiu-Jitsu Matches Mean? 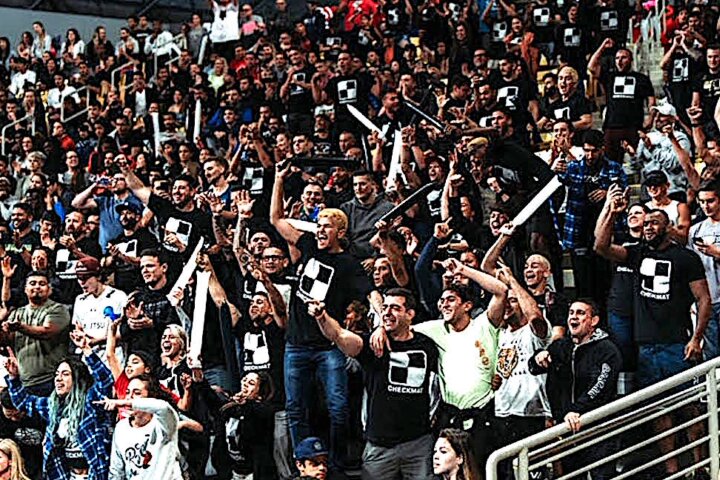 Ever been to a BJJ competition? Either as a spectator or as someone who’s competing? If so, then you’ve probably heard a chant or two, coming from the crowd. These chants are loud and sort of have a typical style to them.
However, what are these chants? What do they mean, anyway?

One type of a really popular BJJ chant is: “Uh Terere!” Terere, among other things, is one of the most exciting Jiu-Jitsu competitors in history. Often when competing, the crowd would be fully behind him and sing his name in the mentioned way.
For instance, take a look at this match. The chant begins at the 1:10 mark.

As a young blue belt, Terere went into his gym at the time and would sing the lyrics to “Whoomp! – There it is”. The chorus of this song says: “Oh there it is”.
And because Terere didn’t know English, he would sing: “Uh Terere”, which does sound very similar to the original chorus. As a result, this eventually became his nickname and adoring crowds would sing it while he was competing.

One other really typical chant is the “heeeeeeey” one, used often throughout the world. It originated in Brazil.
It’s usually shouted by teammates and supporters when the match turns into their athlete’s favor.
It sounds awesome and builds up the match’s momentum. It is often done as a celebratory “song” too.

Skip to the 3 minute mark to hear it in action:

The Gracie Barra team also has a cool chant. This one is commonly used at tournaments when their competitor wins a match. and it is similar to the above example.
It is even sung after a match has been won if the occasion is particularly dramatic.