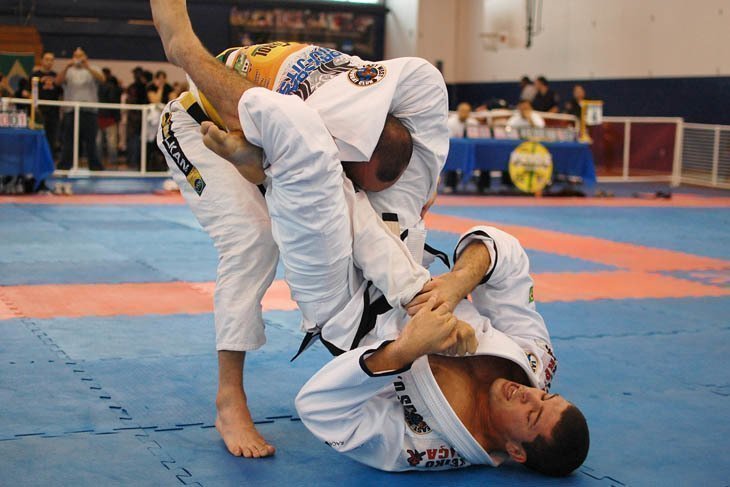 If you’ve been practicing BJJ for awhile, then you’d be familiar with the triangle choke. Whether you’ve done it yourself or fallen victim to it, the triangle choke is a simple yet very versatile submission with many different set ups. It can be performed from any position and using almost any guard (except the deep half). In fact, there are multiple triangle variations from almost all the positions. BJJ competitors who favor the open guard usually use the triangle choke to finish their fights.

To successfully finish the triangle choke, you must have your legs wrapped around your opponent’s neck, with one of his/her arms inside this leg wrap and his/her other arm out. The pressure from your thighs across your opponent’s neck will cut his/her blood circulation, forcing him/her to tap out. However, finishing the triangle choke, just like any other submission, is not as straightforward and easy as it seems. You must have a variety of set-ups for the triangle in your arsenal in order to use it effectively in BJJ.

In this video, BJJ World Champion and ONE Superstar Bruno Pucci shows a triangle choke variation from the closed guard. What makes this move particularly effective is how he hooks his opponent’s arm with his foot. This makes it more difficult for his opponent to posture up and break the triangle. If his opponent continues to try and escape, Bruno can follow his arm using his hooked foot. With the arm trapped, it is also easier for Bruno to get his leg over his opponent’s shoulder and finish the triangle.

Tip: To ensure a triangle finish, you must always have full control of one arm and break your opponent’s posture. Doing so will make it easier to execute the triangle or transition to another submission.

In this video, BJJ Mundials Silver Medalist and ONE Superstar Almiro Barros shows how to do the triangle choke from 5 different positions: the closed guard, side control, full mount, side mount and from standing. Watch how Almiro sets up the triangle: he always ensures that one arm is trapped by pushing it down under his leg. To finish the triangle, Almiro always adjusts himself so that he is in the right angle to restrict circulation. Doing so would help to secure the triangle choke finish.

Tip: As you secure your angle, ensure that you are pulling your opponent’s head down. Doing so would help prevent your opponent from regaining his/her posture and give you more access to his/her neck.

3) 5 Essential Submissions From The Triangle

As BJJ practitioners, you would know how difficult it is to finish a submission. Thus, you should always have a backup submission, or execute a chain of submissions to ensure a finish. In this video, BJJ World Champion Teco Shinzato shows 5 different ways to transition from the triangle choke. As you can see, Teco is always controlling at least one arm to make it easier to transition to another submission.

Tip: The key to finishing any submission is holding it for at least 10 seconds. Remember to count slowly and gradually increase your pressure!

To make the triangle choke part of your repertoire, make it a point to attempt to finish all your spars with a triangle. If this is too difficult, drill with a partner before and after class with increasing resistance. Go on, you got this!