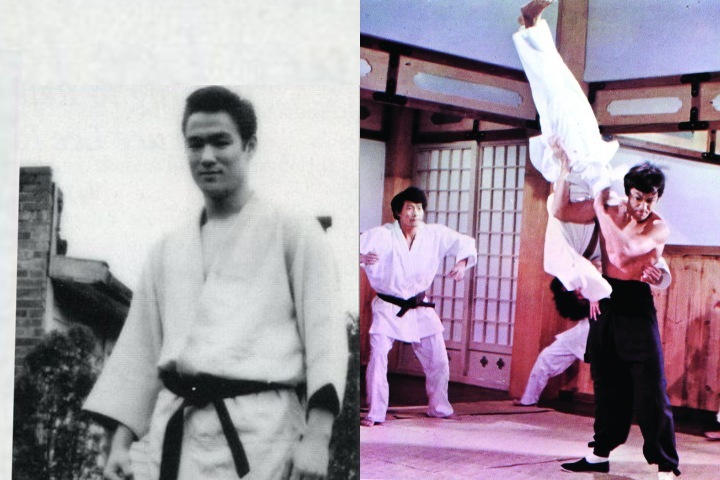 Bruce Lee’s name is unanimous with excellence in martial arts. His philosophy of utilizing everything that is useful and rejecting everything that isn’t – it’s a wonderful, sensible and effective approach to becoming the best; not just in BJJ or any other martial art, but in life in general. This philosophy had him exploring almost every available option in different martial arts, which he did in order to become as complete of a martial artist as possible; which culminated in an art form of his own, Jeet Kune Do.
And one of these martial arts was – Judo! Bruce Lee, it appears, was an avid Judo practitioner as well… But how good was he in it, actually?

One of the most exciting possibilities is the one of Bruce Lee not just being „good“ in Judo, but of him being great in it… What’s more, what if he was actually a Judo black belt?
There are some photos that could point towards evidence to this claim. Take a look at the video below; you can see Bruce Lee wearing the traditional Judo gi, with what appears to be a black belt tied around his waist. Additionally, there are photos that show him executing several Judo throw techniques.

What do you think? Surely, just looking at the photos won’t do justice. So, it’s a good idea to watch him execute some of the Judo techniques in motion – on video.

Bruce Lee’s Judo techniques, as you may have guessed, are all traditional ones. The first one is Tomoe Nage. The Tomoe Nage is a classic sacrifice throw, highly effective both at beginner and higher levels alike; especially useful for catching people off-guard.
Bruce does it well, adding a punch before the throw itself.

The second Judo move Bruce Lee executes is the Okuri Ashi Harai; most likely one of the first (if not the first) setups you learn in Judo. It is a sliding foot sweep, where the athlete applies the sweeping motion through both legs (not just one, that’s a different technique). Bruce does it while blindfolded at one of his Jeet Kune Do demonstrations, showcasing how this technique – as well as all others – is first and foremost about feeling the opponent’s movement, and then taking advantage of it.
On the same demonstration, Bruce executes yet another basic technique; the Osoto Gari. He does it well, albeit with a bit of a Karate-flavor to it.

Then, we have the Kosoto Gari – or the minor outside reap of the leg. Bruce Lee does it swiftly in the movie scene, grabbing the arm instead of the gi.
Also, you can see Bruce doing the Morote Gari as well. It’s a widely utilized throw in Jiu Jitsu, Freestyle Wrestling (Double Legs, anyone?) and – until 2010, when they were deemed as illegal – in Judo as well. Furthermore, there’s a scene of him doing a swift and big Sukui Nage, lifting his opponent high off the ground.

Fast forward to a couple of quick ones; Bruce Lee also shows his Front Headlock submission hold against Chuck Norris, as well as a big Shoulder Wheel or Kata Guruma in another movie. Plus, there’s a picture of him demonstrating the Juji Gatame – the Armbar – as well as a video where he does the Makikomi, a rather popular Judo throw.
In the end, in the legendary scene with Kareem Abdul-Jabbar, he executes the Kata Gatame pin and the Rear Naked Choke!

Watch the video of Bruce Lee’s Judo techniques below and you can be the judge: how good was he in it?