Make Your Mount Intimidating By Restricting The Opponent’s Breathing 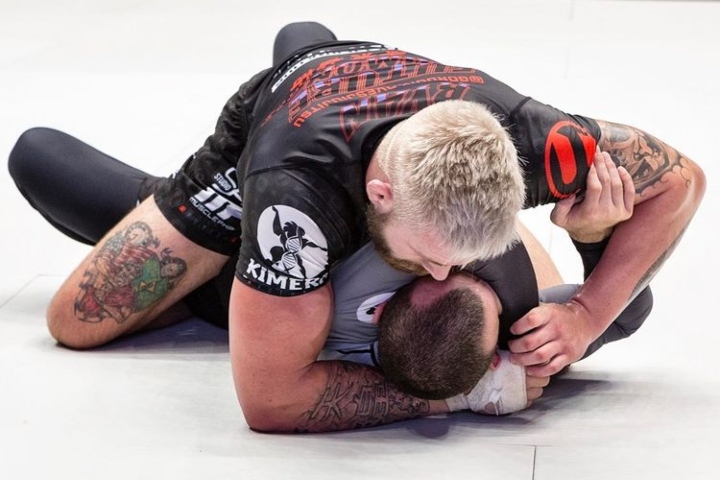 The Mount is a powerful position in mixed martial arts. Once your opponent is stuck underneath it, you can usually rain down a number of punches and wait for them to expose their arms and/or back as they’re trying to defend – after which you can go for Armlocks or backtakes.
However, what about Brazilian Jiu-Jitsu? It might be the case that you, as many other grapplers, find the Mount to be a less stable position than – for example – a Side Control is. And that there aren’t as many submission opportunities from there.

John Danaher explains why this is the case:

Making your mounted position intimidating (even when you can’t punch): The original purpose of Jiu jitsu was to build a positional game where you attain what was considered the ultimate positions in a one on one fight without weapons – the mount and rear mount – from where you could rain down uncontested punches and elbows on an opponent to finish with either the strikes themselves, or submissions based on defensive reactions to those strikes.

Now you have to ask yourself – are those positions still any good when you aren’t allowed to strike in grappling matches? Well, obviously rear mount is still a great position since strangleholds from the rear are the highest rated finishing method in Jiu jitsu.
What about the front mount? Is that still the best position when you are grappling? At first look I would say no. The mounted position by itself is nothing special in a grappling match. It is actually less stable than most side or north south pins and offers fewer submission options.

Danaher goes on to emphasize how you can turn your Mount into a more intimidating position… By restricting the opponent’s breathing:

The magic of the mount is only realized WHEN YOU BEGIN TO MANIPULATE YOUR OPPONENTS ARMS INTO COMPROMISED POSITIONS SO THAT YOU CAN DIRECTLY ATTACK HIS BREATHING AND SET UP DEVASTATING SUBMISSION ENTRIES WHILST SHUTTING DOWN HIS BEST METHODS OF ESCAPE. It is only THEN that the mount becomes a scary position again when there are no strikes involved.

Here’s one such, gnarly setup, which will restrict your opponent’s breathing and make them panic: