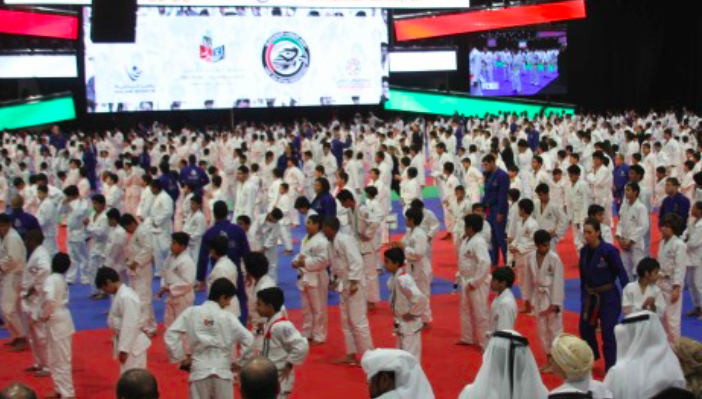 The UAE succeeded in breaking a world record in the Guinness World Records by conducting the largest martial arts ( Jiu-Jitsu ) class in the capital, Abu Dhabi with 2481 participating pupils from Abu Dhabi schools. The event coincided with the National Sports Day. It also comes as part of the UAE’s 44th National Day celebrations. The event was accompanied by an operetta entitled “Lead Nation” in which 700 pupils partook. The event’s activities were organized by the UAE Jiu-Jitsu Federation (UAEJJF) and the Abu Dhabi Education Council (ADEC), and in partnership with Palms Sports.

By setting this new world record, the UAE had the opportunity the scale of the Jiu-jitsu program which has been in implemented in the schools in the Emirates.

“We are proud at the participation of 2481 pupils from various Abu Dhabi schools in this unique sporting event which succeeded in certifying a Guinness world record. We at ADEC have always worked in partnership with other concerned parties on promoting the Jiu-Jitsu sport in Abu Dhabi schools by offering various support and facilities. We would like to congratulate on this achievement all the participating players, their families, the organisers and everyone involved in this event. We also would like to extend our congratulations to our wise leadership and promise to raise the UAE name high at all global events.”

The preparations for the largest martial arts (Jiu-Jitsu) class took 2 months and involved more than 5000 pupils from 40 schools across Abu Dhabi, 200 Jiu-Jitsu trainers, and 150 teachers. In the final preparation stages 2481 pupils were chosen. The class’ duration was 40 minutes conducted on a stage area of 6800 cubic metres. And was attended byGuinness World Records committee to ensure fulfilment of the qualifying standards to certify a world record for the highest number of participants.

It is worth mentioning that the last world record for the largest martial arts class was held, until yesterday, by a school in China with 2200 participating pupils.