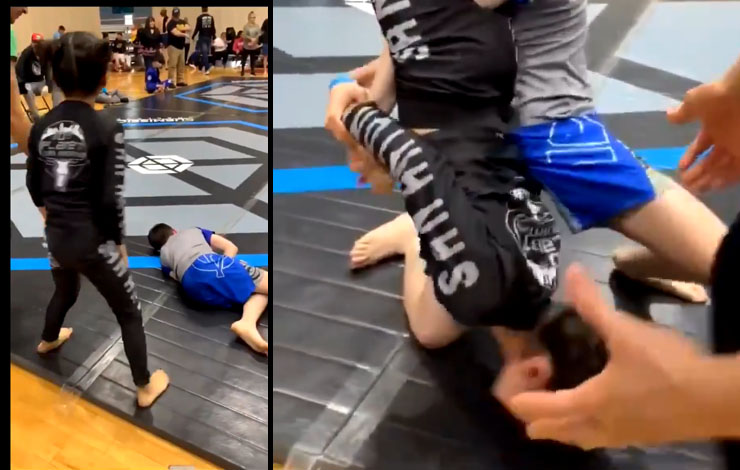 There’s been plenty of talk on how kids should train with each other and at what point are they mentally ready to actually submission grapple. Firas Zahabi famously encourages his sons to wrestle but won’t let them apply submissions.

Recently “Apple” Nuncio –  defeated a 15 lbs heavier boy in competition. When asked if she was as impressed by her own moves as thousands of others seem to be, Apolonia replied that Saturday was business as usual:

“It was pretty normal for me because I believed in myself. I always believe in myself because I have to fight boys a lot,” she said with confidence.

Of course all of twitter went wild considering how the teen handled her business, checked her buns for signs of hair out of place and left her male opponent crying.

Hi my name is Aundria and my 9 year old sister is a badass pic.twitter.com/uDQGpkadwz

Yo this girl destroyed himmm. The way she looks at him crying on the floor like “😒 can someone get Trevor a juice box or somethin” is my favorite part. pic.twitter.com/w5AG6xKslP

The fact that she’s standing here like “Who’s next?” While he’s on the floor is iconic pic.twitter.com/oDUFAPDz6R

He’s down for the count while she checks her buns. I stan

“It was pretty normal for me, because I believed in myself. I always believe in myself, because I have to fight boys a lot,” Apolonia told MySA. “It’s a good thing going with boys, because I get pushed harder — they’re stronger and faster and bigger.”