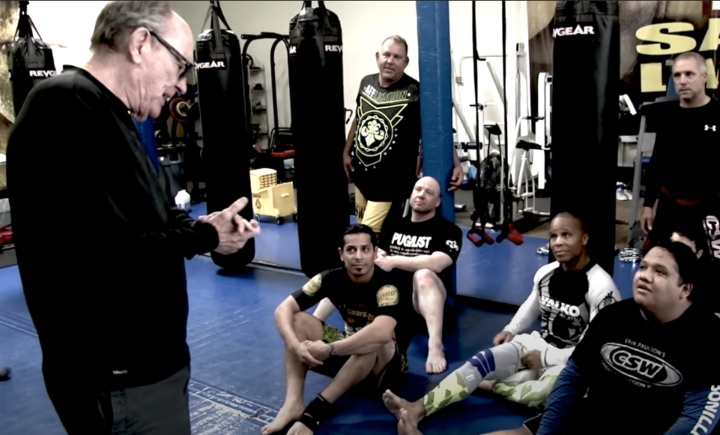 As martial artists, we are often faced with aggressive people who threaten us either verbally or physically. It’s important to know the difference between an insult like “F– You” and a threat “I’m going to b*at you up”.
Insults should be ignored but threats are more serious and are often an indication of incoming violence. That’s why we should deal with verbal threats very seriously.

“Let’s talk about verbal threats. Let me just tell you something, if you ever get verbally threatened you need to take that very seriously and react accordingly. In other words, if someone gives you an absolute verbal threat,
when I say absolute I mean like there’s no conditions, like I’m gonna k*ll you, I’m gonna kick your a%s. Okay if they’re in range to do it and they say it, you need to react immediately because that’s the number one predictor of physical violence is a verbal threat.

If somebody says they’re gonna do violence, that needs to be taken very seriously, so if somebody’s close enough to you to hit you and they say they’re gonna hit you, then you need to hit them first or get the h*ll out of there really quickly. Don’t just wait there.

I don’t try to argue with them if they want to argue and talk about things that’s one thing and then if you feel their body language is a certain way then you should react physically but if somebody is close enough to hurt you physically, then their body language doesn’t really matter at that point unless they’re like with their arms crossed against the wall, but if they’re close enough to you and they say ‘I’m gonna p*nch you in the face right now’ then expect them to so whether you can get away if you want to or if you want to defend yourself by preemptively striking them, then do that.

In some cases, take the threats at their face value, like if it’s a little old lady or a drunk in a bar who says ‘I’m gonna slap you’ that’s one thing but if some guy or some girl that is able to hurt you expresses that an intent to hurt you which is a threat then please please take it seriously and act accordingly.”

On the other hand, here is a crucial lesson on how to avoid physical conflict by talking your way out of it using verbal Jiu-Jitsu.
Sifu Tim Tackett at the CSW 2016 World Conference sharing some ideas of how to avoid getting into a fight by using “Verbal Jiu-jitsu”.