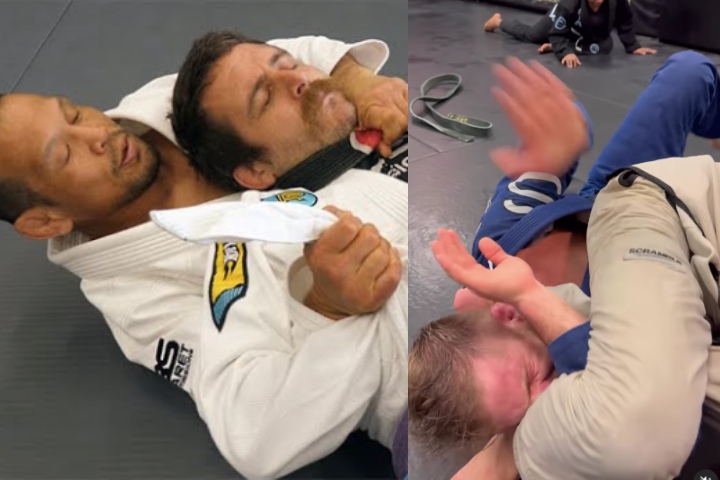 Did you know that, under IBJJF rules, it is allowed to use the belt to submit your opponent as long as it is tied around the waist? Here Joao Miyao shows three submissions using the belt.

MMA and Grappling veteran Baret Yoshida is famous for crazy Back takes and crucifixes.

At a recent IBJJF tournament, he was able to submit his opponent with the Assasin choke using his own belt! Apparently is is legal as long as it’s your own belt and the belt is not untied:

At a recent Fight to Win he was able to submit his opponent with his signature ‘Assassin Choke’ from the crucifix. The ‘Assassin choke’ is a particularly gnarly option from the crucifix where you use the lapel to tie a noose around the partner’s neck leaving no chance but to scream or tap their feet as both arms are controlled.

Here is Baret Yoshida setting it up in the superfight:

Here is a great tutorial on how to set it up:

Want to develop insane Crucifix and loop choke attacks? Alexandre Vieira is one of the most exciting up and coming grapplers today under the Brazilian Top Team flag.  In 2017, his loop choke submission was chosen as the Submission of the Year by FloGrappling. Alexandre recently put together his Crucifix and Loop Choke 3 volume instructional set.  Alexandre brings a modern outlook to some of the sports most devastating, but sometimes ignored positions, the crucifix and the loop choke.