Use Your Opponent’s Escape Attempt For The Most Effective S Mount Armbar! 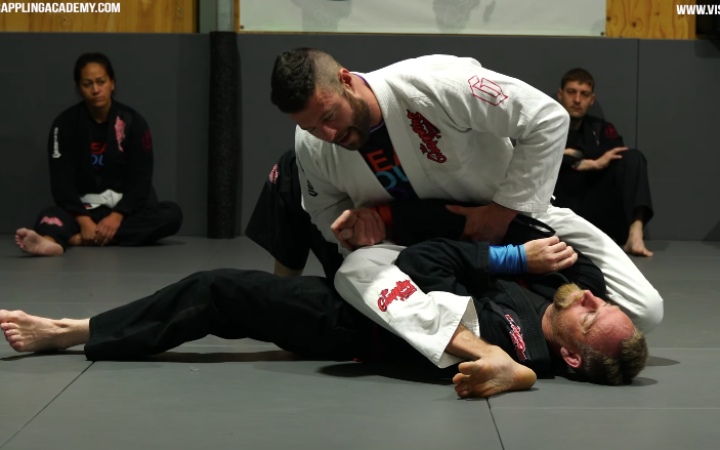 There’s a LOT of techniques you can learn in Brazilian Jiu Jitsu! In fact, there’s so many, that you’ll likely never be able to learn the most of them… But here’s the catch; once you get a certain number of techniques down – when you learn them well and across several positions – you’ll be able to figure out how to modify them when a situation calls for it. That is, you don’t need to know how to apply a submission in every way possible; but in just a handful of ways, in the most perfect manner that you can.
One of these techniques is the Armbar from S Mount. Learn how to apply it well – and it will transfer to other setups (and techniques) as well!

Let’s see it explained by coach Tom, from The Grappling Academy.

DON’T EXPECT IT TO WORK IMMEDIATELY

Coach Tom doesn’t start with the technique explanation immediately, however. On the contrary; he begins by explaining that you shouldn’t put too much stress on yourself when you’re practicing something new.

A lot of Jiujiteiros, especially those who have started their BJJ journey quite recently, place too much importance on the fact that they „can’t get the technique to work“. For example; you may practice executing this Armbar setup while rolling, and your training partner outsmarts you. Then you give it a couple more tries, failing at each of them – only to conclude that this technique doesn’t really work for you.
But here’s the question that Tom poses: if you’re playing basketball for the first time, would you really expect that you’d be doing it well? Would you have an expectation of putting that ball through the net each and every time you take the shot?

Of course not, because you’ve never played basketball before. So why would you expect the same thing from yourself in Jiu Jitsu? It doesn’t make sense; especially because BJJ is a wholly different animal from basketball… In the end of ends, that ball isn’t trying to choke you out, is it?
So, take it slow and put in the work. The technique works; you just have to learn how to apply it, through some trial and error.

Now, the way this S Mount Armbar setup’s done, is in a situation where your opponent blocks your arm to perform a basic Mount escape. When he does that, your goal is to shift the knee of your opposite leg higher up; this will incapacitate them from both knocking you off-balance and from doing a successful Hip Escape.
This is done with another goal in mind, of course; you’re now in ripe position for setting up your S Mount!

To do so, coach Tom points out that you’ll need to grab the opponent’s elbow (on the opposite side to your higher-up-knee) and elevate it. This is done so that you can slide your other leg higher up as well, using it to wrap the opponent’s arm and thus establish an S Mount.
Coach Tom emphasizes the way you’ll distribute your weight here; almost all of your weight should be in the glute muscle of the leg which is wrapping the opponent’s arm.

Now, to execute the Armbar, Tom shows that you can grab the opponent’s thumb (in a sort of a bro-handshake manner) so as to make sure that it’ll keep pointing towards the ceiling throughout the motion. Then, slide your other leg across, fall back, squeeze your knees and elevate your hips to finish the Armbar.

Watch the video below for more details: