Use This Cross Grip Break Technique To Set Up Massive Throws 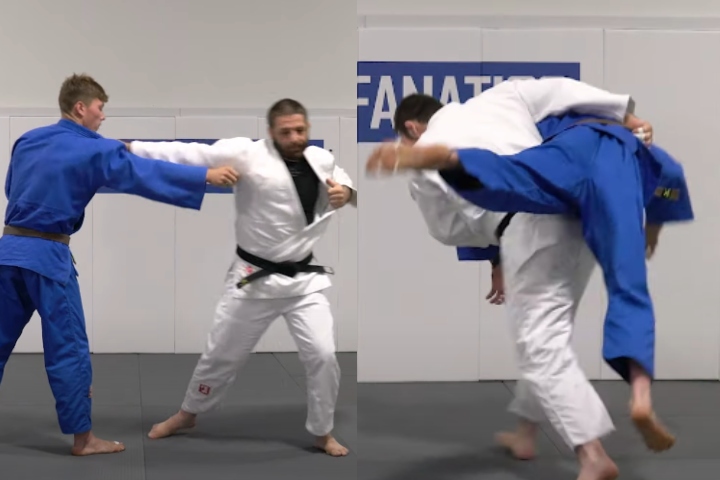 You don’t always have to be on the offense immediately in order to dominate your opponents. What’s more, actually, it’s often that you’ll find great opportunities to subdue them from situations when you’re seemingly purely defending yourself… Such as when breaking the grips when standing and prepping for throws and takedowns!
Using the Cross Grip Break technique to set up your offense is a great example. Travis Stevens shows how to do just that.

WHEN TO USE THIS CROSS GRIP BREAK TECHNIQUE – AND HOW?

To begin with, Travis explains that you can use this Cross Grip Break setup a lot of times when you feel stuck; or when the grips of you and your opponent just aren’t changing position. That is, this will be a great way to set up some motion which will make it possible for you to throw your training opponent with two hands on the gi.
Travis moves on to elaborate on the fact that he, personally, likes to use this technique as a way to set up his Seoi Nage throws.

What happens, he goes on to explain, is that his opponent would grab a solid collar grip and that he would then, accordingly, grab the opponent’s collar over the top. And then, when he would go for the Seoi Nage entry in this situation, Travis found that there wasn’t enough room to work in, as his opponent would stop him with his other arm every time.
So, what Travis would do instead, is that he establishes a cross grip on the collar (same side as the opponent’s gripping arm); as well as that he grips his own collar – the one the opponent is grabbing – underneath the opponent’s arm.

With the setup in place, Travis executes it by punching his shoulder back and breaks the opponent’s grip off! The thing is, with his own cross-collar grip in place already, he now has an incredible opportunity to set up some serious movement with it.
In other words, Travis is now on the offense. He can start moving his opponent around him; so that when he changes his post – he’ll be able to throw.

It’s a rather easy thing to do, actually. Travis often does it when he feels stuck in a position but really wants to go for the Seoi Nage; he’ll break the grip, move the opponent around, and then – as he’s free of the opponent’s hands – he can set up the technique with relative ease.

MORE THROWS TO IT

Now, you can use this Cross Grip Break technique offense setup in all sorts of different situations. For example, when the grips are the same as above and you want to grab the opponent’s sleeve, but they aren’t giving you the opportunity to grip it… Break their grip first, then! Just be aware that you need to do it in a dynamic way, so that your opponent doesn’t establish the second grip onto your gi instead.
The key, as Travis explains, is to do this quickly. You want to really reach for the opponent’s sleeve, so that they pull their arm back. This will give you the space and time to grab their collar, without so much fear of the double grip control on their behalf.

And now you can have your way. Instead of pulling the opponent towards you, you can just come in towards them instead and reach back with your hand! This is a really powerful position, one you can use for all sorts of throws – and quite a simple one to get to!