Use The Samurai Grip To Set Up Attacks In The Gi 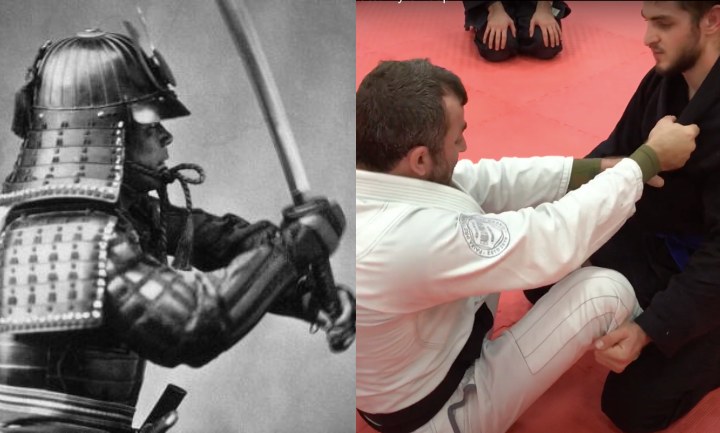 If there were one most important thing to do at the beginning of a BJJ match, then it would be to establish some sort of control and dominance over your opponent, as soon as possible. And if there’s one thing that you should’ve learned in your Jiu Jitsu class up until now, it’s that the grips are everything.
Simply put, you need to establish a dominant grip before your opponent does! Because of that, you have to learn the Samurai Grip; one of the strongest and most versatile grips out there.

The Samurai Grip is, essentially, a sturdy two-on-one grip that you establish on your opponent’s collar; a very powerful one because your opponents can’t break it that easily and particularly useful when in a Butterfly Guard position.
Pay attention, however, that you don’t grab the collar too high; you aren’t going for a choke, but for a grip. So, your Samurai Grip should be somewhere in-between the medium and high placement – you’ll figure the right height for yourself, just make sure not to grip any lower or higher than these two extremes.

Having figured out what the Samurai Grip is, let’s take a look at how you can use it to set up three different attacks from the Butterfly Guard.

You can set up the Reverse Armbar with a pretty similar setup you’ve gotten the sweep previously.

Finally, there’s a great Triangle Choke you can get with the help of a Samurai Grip! Professor Gile, from Kimura BJJ Serbia, shows the so-called „Samurai Triangle“ setup.

After he has established the Samurai Grip, Professor Gile scoots in underneath his student. Then, he shoots his legs up – doing so by leading with his heels – across the student’s shoulders; with one leg coming around the student’s arm, on the side he has established the Samurai Grip at. From there, he locks a loose Triangle.
To get the tap, Professor Gile squeezes his knees in towards each other with the help of his hands.