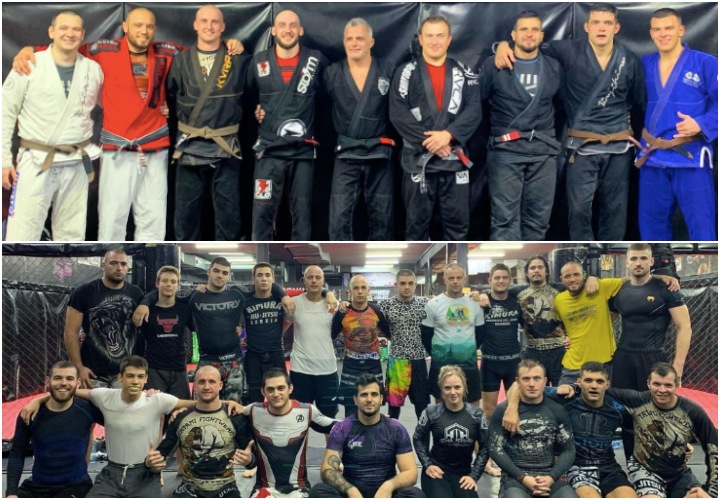 Written by Benjamin Reed, BJJ purple belt from the USA, follow him instagram.com/benjamin_reed_phuket

Not a lot of people have put thought into training BJJ in the Balkan region of Europe. I could further go on and say not a lot of people really visit the Balkans outside beach areas. It’s by far one of the most underrated parts of Europe and it’s the most affordable. I arrived in Serbia in September 2020 after a particularly rough point. I had just had a motorcycle accident, I wanted to start training again and the pandemic was still in full swing.
I really thought as an American military veteran and an out of shape purple belt I was going to be processed meat for tough Serbian athletes. I decided to go to Kimura BJJ Serbia based on proximity to the nice touristy parts of Belgrade. It’s in a nice location because you can walk out and there is a main strip with Serbian fast food, pizza and not even that far a great sushi place.

The gym is decent sized (400m2) with three mat areas. The prices are reasonable as well. It really styles itself as the “We have our own affiliation but we are not affiliation gym” style so there is no heavy emphasis on GIs or corporate Structure. You show up, you train and people have fun. I say this because I’ve been to some other gyms where the blackbelt really wants to emphasis this is some sort of paramilitary training. It’s a no-stress environment. Everyone speaks English quite well. They have a big kids class and what is cool is that at least 10 of the BJJ parents are training and have really adopted the BJJ lifestyle and even hang out together outside the academy. There us a real family atmosphere and then afterwards, they have tougher competition classes with upper belts.

Guillaume ‘Gile’ Huni is the owner, a Franco-Filipino raised in France, Philippines and the UK who has lived 17 years in Serbia, who has made the pilgrimage like myself to Rio. He’s in his mid 40’s but in great shape and I would rate him on par with any standard black belt in Brazil. There’s no Eastern European systema quackery of unvetted trainers going on. The secondary coach is Masafumi Matsumoto from Japan who spends a lot of time between Serbia and Bali MMA with the Leone Brothers. There are three others black belt instructors, Luka Radulovic and Stefan Nemanja Manojlovic. They also have a resident Russian BJJ black belt, Ilia with a very crafty lapel guard game. Classes are taught in Serbian and English. Together they foster an environment suitable to the competitor and the office dayworker.

I found the guys to be quite amicable to me and the belt holders to be warranting of their promotions the received. There were good rolls. Training is evolving and open minded, dogma doesn’t prevent logical teacher to student interactions. One of my favorite things to do after training was to walk down the street and try the local cuisine. Belgrade for a capital city is quite affordable. My best recommendation is to come in late September. There will still be good weather, it won’t be too hot and you will get the full experience as a tourist in the city. In the entire country of Serbia, having spent six months, it’s Gi program is by far the best.

Serbia itself should be highlighted for a martial arts adventure. The kickboxing training and MMA training is good as well. Slavs are tough fighters. Serbians are great guests. For a Nation that arose from the 90’s with a bad reputation, you would never know why. Make sure to travel to Novi Sad as well, where legendary kickboxing Coach Misha runs a program out of a gym called Ronin with Olivier Ross. Best kickboxing training I’ve been to. Serbia awaits you, got and visit!.