Upgrade Your Toreando Guard Pass With These Tips From Andre Galvao 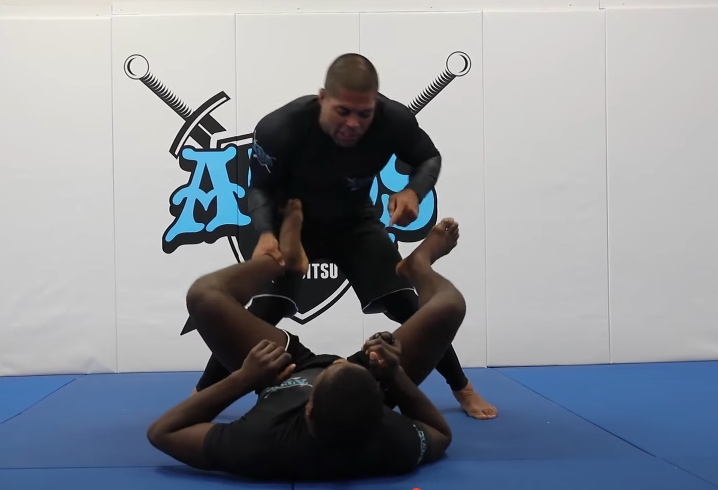 The Toreando Pass is probably one of the first guard passes you’ve learned in BJJ – one that, more likely than not, you’re using on a rather frequent basis. However, no matter how much time’s passed since you first gave it a shot, you can still take it to the next level!
Andre Galvao demonstrates how.

REINFORCE THE TOREANDO BY USING YOUR ELBOW AND THIGH MUSCLE

One way that you’ve probably been doing this pass is by pushing the opponent’s legs into him just with your hands. There’s a better way to do it, however. As Andre demonstrates, you can rest one of your elbows on top of your thigh muscle first. Then, use the strength of that thigh and get onto your toes to push the opponent’s leg even more into him. Make sure to bring the heels to his backside as well.
This will create a stronger reaction, where your opponent will push back into you with more force. Then, you’ll be able to use this reaction to pull his legs to the side (opposite to the one where you’ve been using your thigh) and pass the guard.

Also, pay attention to how Andre has his legs outside of his training partner’s attack zone. If he were to step in while passing, he’d risk getting leglocked; therefore, keep your legs outside.
Furthermore, make sure that the opponent’s flat on his back. If he’s sitting, then either push him down or grab his ankles and elevate them.

DROP DOWN TO SIDE CONTROL

Now here’s the kicker: as you’re using more of your bodyweight to push into the opponent’s legs, you’ll have a much easier way passing their guard – you’ll be able to drop down immediately!

Yes, drop down. You might’ve been practicing the Toreando Pass by flicking the legs to the side and then by stepping in with your foot next to the opponent’s hip in order to, perhaps, secure a Knee On Belly. However, Andre explains that this is not the most optimal tactic – your opponent could attack your leg or escape much more easily than the alternative would provide.
And the alternative? Drop down into Side Control as soon as you pass the opponent’s thigh muscle. As soon as you see this opening – go for it!

Andre also emphasizes that your primary aim should be to get an underhook once in Side Control. If you don’t manage to do that, then post your hands onto the opponent’s biceps; this will make it much more difficult for them to frame and escape.

CONTROL THEIR LEGS AND KNEE DOWN THEIR ARM

As a second way to improve your Toreando, Andre points out that sometimes you won’t be able to pass by dropping down; reason being that the opponent will try to retrieve his guard by throwing his legs back into you.

Therefore, you need to practice pulling his legs and then, instead of dropping down, stepping to the side and catching both of his ankles as he elevates them yet again. Do this with a thumb pointing outwards grip.
Now that you’re here, don’t try to push their legs back to the mat – you will end up in an awkward position. Instead, Andre shows that – as the opponent grabs your leg (this will be their only option for defense at this point) – you need to drop your knee down onto their arm. Then, push their legs and drop your torso down onto them. Control their hips with your hands and, as soon as they bridge up, establish a Bodylock.

Watch the video below and let Andre improve your Toreando Pass: