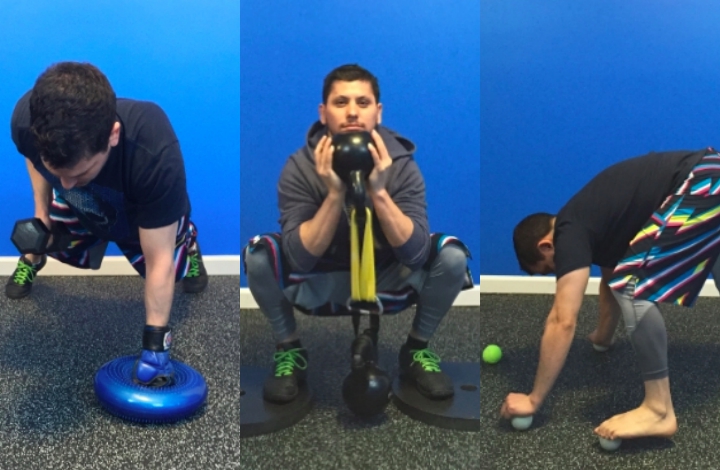 Guest post by Emre Bardakci a specialist in Biomechanics. Emre is a black belt in Judo, blue belt in BJJ and has spent over 12 years in Turkey training with Turkish Wrestlers, Judokas, Russian/Chechen/Ukranian/Georgian/Azerbaijani Sambo/Judo/Wrestling practitioners. Make sure to check Emre’s book best selling book:The Strength Revolution: An Unconventional Guide to Strength and Conditioning.

I spent 12 years in Eastern Europe studying Judo, Sambo, Greco Roman and Free Style wrestling along with Eastern European strength training methods.  I was lucky and blessed to train with many world champions and olympic medalists from many of the Eastern European countries including: Turkey, Russia, Ukraine, Azerbaijan, Moldova, Georgia, Romania, as well as with Chechen athletes.  Most Eastern European athletes have a very unique, unorthodox training methods and many of these exercise methods have been being used by the west for the past 10 years.  Some of these exercises include sledge hammer training, kettlebells, olympic lifting, and ring/gymnastic exercises.  I am not the biggest fan of crossfit but I am glad the Western world athletes started incorporating techniques like: olympic lifts, handstand walks, muscle up, ring handstand push ups along with kettlebell and battle rope methods into their regime.   During the time I lived in Eastern Europe, I would go back and forth to the US and I would see a huge difference in the training methods.  At the time, US was big on  bodybuilding methods and some equipment such as the Bowflex; and along with various machines were favored.  There was a world of difference between the training methods in the mid nineties.

Throughout time, exercises like battle ropes and barrel training which were developed by John Brookfield and similar unconventional training methods have become more popular.  Battle ropes and barrel exercises are super solid training methods and are used by many coaches/athletes.  These methods are super effective and this is the type of philosophy I was  exposed to while training in Eastern Europe.
I always kept this philosophy in my training and always tried new training ideas to challenge  my nervous system and muscles.  I always looked for challenging methods that could be done in a safe fashion with proper biomechanics.
The exercises below are a few I found to be super helpful for stimulating the nervous system and activating different muscles.  After all, muscle confusion is necessary to keep progressing. This exercise will activate muscles you never you knew you had.  It is fun and very challenging.  It will work your core muscles like they have never been worked before.  To perform this exercise, you need to spread out multiple tennis and lacrosse balls.  I like to mix them up since they both are a little different in nature and this provides the optimum benefits.  Feel free to use one or the other but depending on your weight, the tennis balls sometimes cave in so keep this in mind. Once I place the balls on the floor (yoga mat placed on hard floor is a good alternative) then I start in a bear crawl position with all of my limbs on top of a ball.  The goal is not to touch the floor at all.  Once my first position is established, then I take one limb off at a time and get into a new position.  You can use colored balls and have your coach call out a color and you basically try to place your hand or leg on it just like in twister.  The spine will not be in an organized “natural curvature” position and I think it is good to once and a while get out of the “natural spine” position with exercises like this.  During martial arts bouts such as wrestling or Brazilian Juijitsu, the spine gets into various positions and this type of training helps you train and prepare for those real life scenarios.  I try to do this for long durations and it will really tire you out since there are so many muscles activated.  Your stabilizers will get worked at a different level.  I try to place my knee on a ball during some of these movements to make this exercise even more challenging.  I also try to hold yoga positions such as downward dog pose on top of the balls.  You can get really creative with this.  When you move from one position to another, try holding each position for 5-15 seconds before you move onto the next one.  This is another super challenging way to implement this exercise.Make sure to wear a weighted vest for this exercise.

I also do floor crawls by placing a lot of lacrosse/tennis balls in one position.  This will almost look like wall climbing but on the floor.   Try to make sure each ball does not move while performing this exercise. This exercise is performed by using only four lacrosse balls.  Basically you will get in bear crawl position then try to roll one of the lacrosse balls forward with one limb at a time.  Do not grip the ball by any means and just use your palms or bottom of your feet to roll one of the balls forward at a time.  This is another great way to train and this may tire you out in 5-10 minutes the first time you try it.  Next time you are planning to do a yoga workout; I recommend you try this instead.  I have been using this as a rest day or recovery day exercise. It is fun and it only needs four lacrosse balls and a hardwood type of surface to perform.

Exercise #4: Goblet Squats with a Band and Weight This exercise is a great one to develop the wrist.  The wrist muscles will work at a 360-degree angle.   You will need MMA gloves to perform this exercise and you will wear one at a time during the exercise.  As shown in picture (a), you will wear one MMA glove on your right hand, make a fist and place it on your balance trainer.   Then you will get into plank position shown in picture (a).  In this position you will perform renegade rows with a light weight.   This will be very challenging for your wrist that is placed on the balance trainer.  This exercise is great for building wrist strength and punching power for combat athletes.  I recommend performing this exercise with and without the balance trainer.  With the balance trainer, you won’t be able to work as heavy weights.  I recommend performing this exercise after you are able to hold one handed planks on the balance trainer.  That is the pre-requisite strength exercise for this one.
This exercise is not just great for strikers but for anyone who is looking to build their wrists.  Anyone that is trying to improve their grip should also be focusing on wrist strengthening.  Men like Joe Kinney, who is the first man ever to close the CoC gripper #4, realized the importance of the wrists and worked them regularly as a part of his grip training routine.
I hope you enjoyed this article.  Always be safe and use sound judgement while training.  These exercises are from my book “The Strength Revolution: An Unconventional Guide to Strength and Conditioning” and you can grab a copy  here.