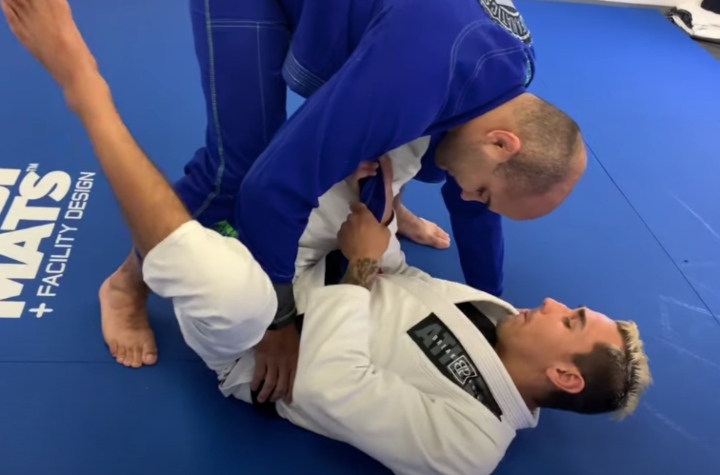 The guard in Brazilian Jiu-Jitsu is a position where you can attack from a seemingly neutral position. What makes the guard a dangerous position to be in is the sheer variety of guards that can be used. This means that attacks can vary depending on the guard that is being applied. Attacking from the guard, especially with the gi, makes things tricky because you can use the fabric of the gi to your advantage. Many gi-based guards in BJJ employ this strategy to gain an edge over the opponent. Today we’ll talk about the lapel guard in BJJ.

The lapel guard is characterized by using the structure of the gi to create opportunities for attack. It is a broad term, which means that many guards can be considered within this category. The main benefit of the lapel guard is its inherent trickiness due to the use of the lapel as you can use it as an extension of your body to wrap around the body of the opponent. The lapel is also harder to remove once it is wrapped around the body. This is especially the case if the opponent is not knowledgeable on the proper techniques to remove it. Imagine using a rope on someone who does not know how to untie it – this is how powerful the lapel guard can be in the right hands!

Perhaps no one in modern BJJ is known for using the lapel guard as BJJ superstar Keenan Cornelius. Keenan is known for his intelligent and analytical approach to BJJ and is also recognized for spearheading the lapel guard meta by introducing many variants in competition. Keenan is a taller guy with long and flexible limbs; this has undoubtedly helped make his lapel game tough to deal with, but don’t fret if your frame is different – lapel guards can work with any body type!

Keenan is a Hawaii-born Brazilian Jiu-Jitsu athlete who currently trains and teaches in San Diego, California, as Legion American Jiu-Jitsu’s head coach. He previously represented Atos as well as Lloyd Irvin’s academy. He is known for his amazing run in the lower belt ranks, in which he won the Grand Slam (Worlds, Pans, Euros, and Brazilian National). Keenan Cornelius is thus considered one of the most successful brown belts to ever compete in BJJ.

As far as technique goes, Keenan is recognized for inventing and successfully employing a revolutionary gi guard system. Andre Galvao, his former coach, refers to Keenan’s innovation as the Worm Guard because he connects his leg to his opponent’s hip and opposite leg with one hand and his opponent’s loose lapel. This configuration leaves a side open for attack. He and many others have continued developing and designing ways that utilize the gi to further improve the BJJ gi game.

Is The Lapel Guard Worth It?

Using lapel guards is a great way to level up your game. Lapel guards are inherently very technical as it uses the gi to wrap around and immobilize parts of the body. This means that there are specific techniques that you must learn to pull off the guards successfully. This can take many months of dedicated practice because slight shifts in body position require adjustments in the technique. Still, once you understand the underlying principles in the techniques, you should be able to use these guards effectively.

A significant advantage is that these guards are highly technical and therefore require a certain level of understanding to get out of them. You can’t just muscle out of the positions to escape. Muscling out can actually make things worse because the gi will make the configuration tighter. This in itself is a benefit for the lapel guard user because the lapel game is still evolving, and not all BJJ academies use them.

Wrapping your far foot around the opponent’s leg is the primary objective of this technique. Looping the gi between your and their leg while hanging on to the gi’s bottom fabric (tail) accomplishes this. The configuration of this guard establishes a strong connection between the two BJJ players, allowing for a variety of sweeps and submissions. Other versions of this guard exist and are basically the worm guard with slight changes in grip and foot position.

In this video, Keenan expertly breaks down how the worm guard is set up. Take note to loop the gi to the outside of your shin. As a beginner, it is recommended to work on getting into the position first. Work on practicing the sweeps and submissions once you get comfortable.

In this video, Keenan breaks down the important concepts on how to use the squid guard. The squid guard employs a lapel wrap between your leg and the opponent’s leg, after which you swing to face them. This is a difficult guard to pass since it offers a variety of sweeping possibilities. The ‘lapeloplata,’ a slight modification of this, employs the same grip, but the guard player inverts and may attack with submissions like the omoplata.

This guard was invented by multiple BJJ champion Braulio Estima. The galaxy guard involves opening the opponent’s gi and placing your foot on their lapel. Notice that the final configuration is similar to the spider guard but the pressure is not placed on the bicep.  This makes passing challenging and allows you to go beneath your opponent for attacks.

The lapel guard is one of the many evolutions we’ve seen over the years in BJJ. While these are not the most essential guards to learn,  knowing at least one lapel guard is still very useful and can help your understanding of BJJ. Lapel guards can teach you the value of grip control, body shifting, and distance management – all critical themes that a grappler should know.

Kauan Barboza is here to pull back the curtain on the Modern Lapel game. 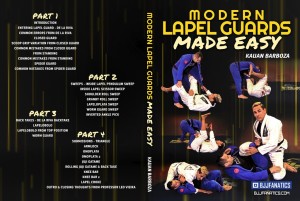