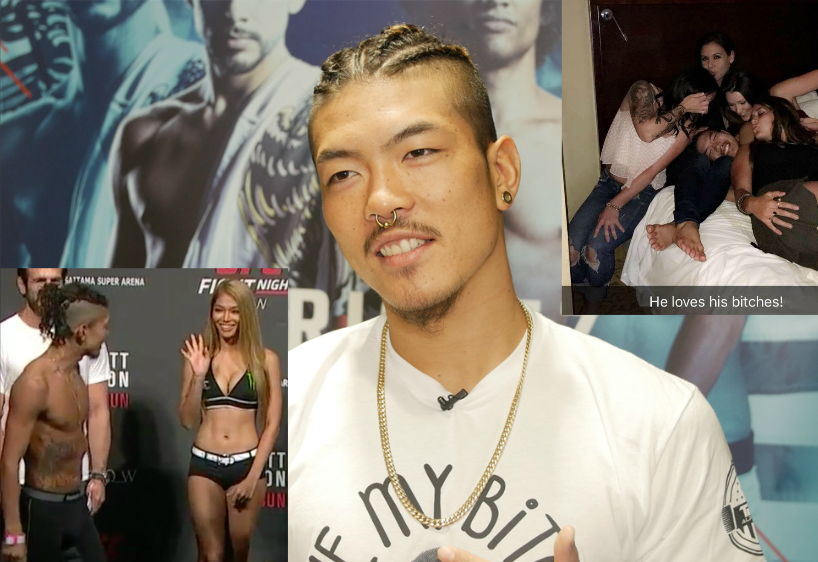 Ishihara has recently admitted that the only reason he fights MMA is get girls!

“bang b-tches all around the world.”

Teruto Ishihara gives advice on how to get the ladies:

Funny moments from UFC featherweight Teru Ishihara, a fighter and a lover / ladies man, and creator of the catchphrase “I love you my b*tches”:

“I do this because it’s the best way I know of to get girls. If you fight, and you get the knockout, you get the girls. That’s my thing, getting the girls.”

“MMA is something I shine in and when I’m fighting is when I look my best,” he said. “I think I’m most attractive to girls when I’m doing this. If I thought I was good at something else that would get the girls to pay attention to me, I’d do that.

“If I thought soccer was that thing, I’d do soccer. Singing, I’d sing. I’d even do a cooking show if it brought me the girls.”

About sex being bad for fighters:

“The people who say that are just scared-y cats,” Ishihara said. “I’ll stop 10 days out before a fight, but during the training camp is when I’m at my wildest.”

“My Dad was a big playboy,” Ishihara said. “My Dad would take me with him to see a [woman] he was having an affair with. It wasn’t that uncommon. I grew up seeing that kind of stuff.”

“I want to experience as many women in the world as I can,” Ishihara said. “…The reason I’m in the UFC is that there are so many people who watch it and that’s the best way to help me become as popular as I can with them.”

When asked about his current English-speaking abilities, Ishihara did not give a clear answer. But he believes there’s one thing that would prove he successfully learned the language.

“Once he’s able to pick up a girl and be able to take them home, that’ll give him confidence,” the translator said. “Eventually, he wants to make a girlfriend out in the States and learn English from them.