TV Anthony Bourdain on his Passion for Jiu-Jitsu: ‘I’m in the Best Shape in my Life’ 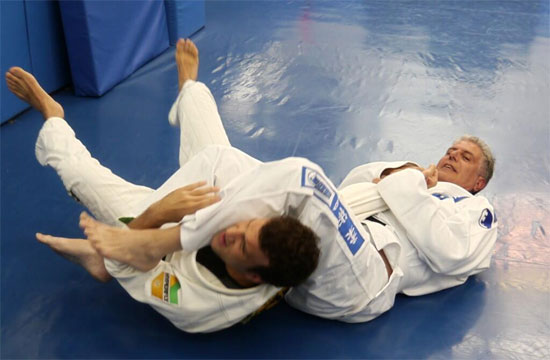 58 year old Anthony Bourdain is an American chef, author, and television personality. He is known for his 2000 book Kitchen Confidential: Adventures in the Culinary Underbelly, and in 2005 he began hosting the Travel Channel’s culinary and cultural adventure programs Anthony Bourdain: No Reservations and The Layover. In 2013, he joined CNN to host Anthony Bourdain: Parts Unknown.

Bourdain talked talks to Yahoo Sports about his enthusiasm for jiu jitsu and how he looks for BJJ academies whenever he travels somewhere for work:

“Increasingly when I’m on the road, I train at wherever the best place is and if there’s no best place, I’ll take what I can get,”

“But increasingly as I make the shooting schedule and put together a list of destinations, in the back of my mind I’m thinking ‘Can I train when I’m there?’ and if it is a place where they do have an academy, I try to arrange my shooting schedule so if I can wake up very early in the morning and go roll for an hour or two, I will.”

“I’m easily in the best shape of my life.”

“That really wasn’t the intention at all. I didn’t get into this for my health. But I thinks it’s a byproduct of (when) you come in every day, try real hard not get your ass kicked.” 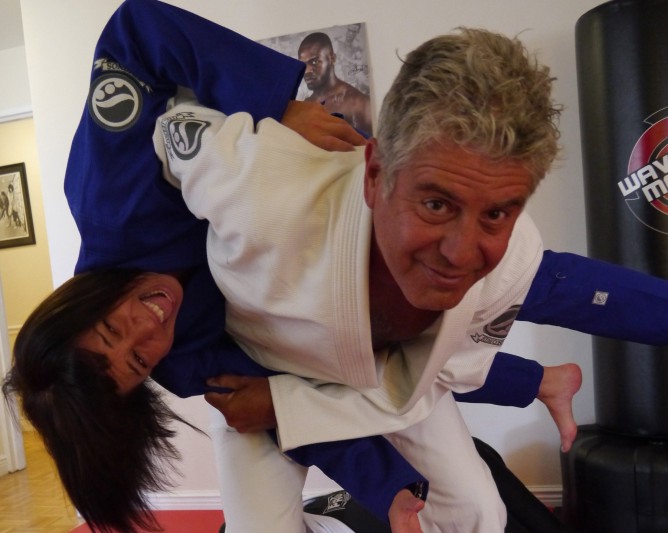 About his new healthy lifestyle as a result of BJJ:

“Look I’ve had to make adjustments,” he acknowledged. “If I know with absolute certainty, as I do, that just about every day I’m going to be waking up early in the morning, going into the academy and getting my ass kicked by some 22-year-old wrestler, yeah it certainly changed my alcohol intake, I can tell you.”

“I’m not drinking anywhere near what I used to and I’m much moderate in my eating habits — because you really pay a price for misbehaviour immediately on the mat. You feel it and you pay a price in physical pain and humiliation.”

“It’s a lot like being back in the kitchen again, in my first days as a young cook where I was the worst cook in the kitchen and there was so much to learn,” said Bourdain, fresh from a workout. “And every day that I did manage to learn some tiny technical detail that made my game better, that was the kind of satisfaction that I haven’t had in a while.”

He likes the BJJ community:

About what he expects from Jiu-Jitsu:

“I have to be realistic. I’m 58, I will never be winning medals against people a third my age. Jiu-jitsu will not make me younger or smarter — well maybe smarter. I will probably not live long enough to ever get my black belt. But I really deeply enjoy the process of sucking a little less at something every day.”