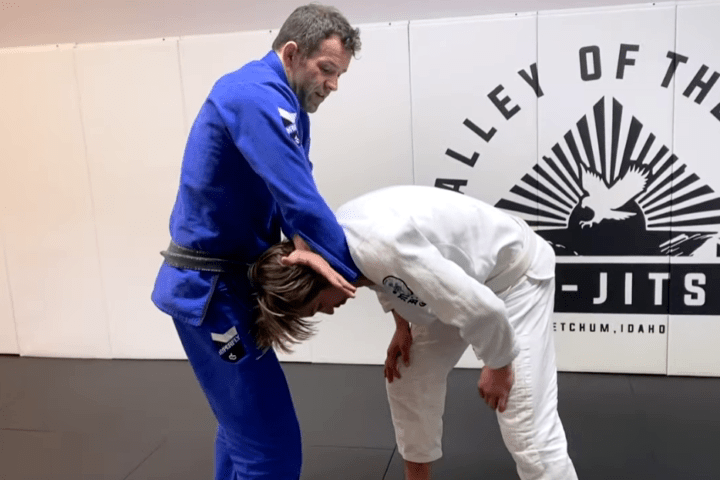 Loop chokes are fun! They’re so simple to set up that it’s almost ridiculous how easily you can get them sometimes… It’s just that your opponents don’t expect such a “white belt level” submission (which it absolutely isn’t) to work on them. Not in the least when they’re standing up.
But there’s a surprise in store for them. You’ll learn how to set up a Loop Choke while standing up! It really isn’t too difficult – Joel Bouhey demonstrates how.

To begin with this setup, you need to cross-grip the opponent’s collar. Pay attention here: Bouhey emphasizes that you shouldn’t grab too deep, as this will make it impossible to get the choke. With that said, you shouldn’t grab too low – because then you’ll have absolutely nothing going for you. Rather, you should aim to have your grip at around the level of the opponent’s collar bone; and to keep this grip loose.
Loose as it is, you’ll cover the area of the opponent’s chin/neck with your forearm, doing so by the motion of “wrist locking” yourself in the process. To get this, you’ll need to bait your opponent either to go for a takedown or to snap him down towards yourself.

When his head is down and your forearm across his neck, you’ll reach with your other Loop Choke arm. Make sure to block the opponent’s head with your hip; either while still standing or when you fall back to Closed Guard.
Watch Joel Bouhey demonstrate this setup in more detail on the video below: