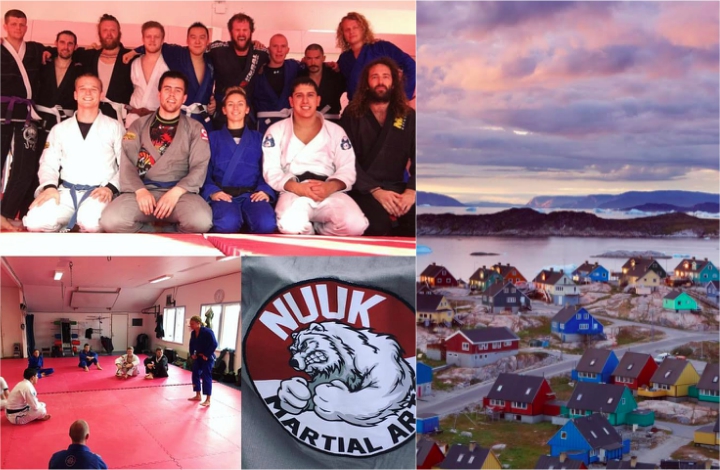 Guest post by Chad Wright AKA ‘Fat Jesus‘, a larger than life character in BJJ. This Australian BJJ black belt is the CEO of Infinity Martial Arts, a large Franchise of BJJ/MMA academies that is spreading all ver the world. He is currently doing a world BJJ trip training and teaching in various gyms across the globe. He recently spent a few days in Greenland where he participated in the BJJ Globetrotter Camp there.

With a population of only 55,984, Greenland is the least densely populated country in the world. Nuuk, the capital city has only 16,992 inhabitants. No BJJ black belt has ever taught on the Island before this camp. So you can only imagine the struggles of growing a BJJ club in this remote place, but that is exactly what Jason Nystrup is doing. And when I say remote, I mean remote… it might be easy for you to think that you could easily jump on a flight and get the odd session in, but flights to the closest place where there’s other BJJ clubs (Copenhagen or Reykjavik) are at least €1000 and a full day of travel away! And you can’t even drive to other towns in Greenland, as there aren’t any roads linking them… even if you could, there aren’t any other BJJ clubs to visit. 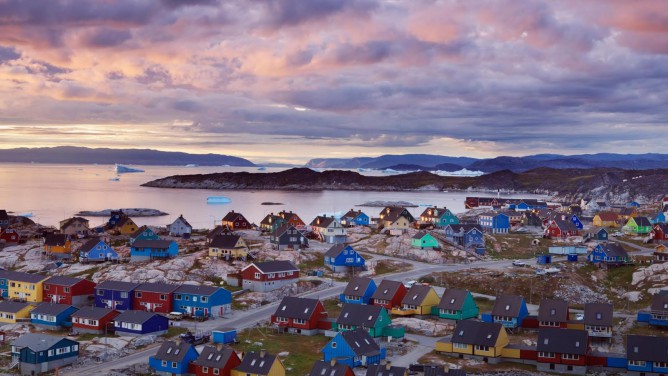 Caption: colourful Nuuk, capital of Greenland.
Jason has been running Nuuk Martial Arts for around 1.5 years, with training three nights per week. Though student numbers aren’t through the roof, there is a solid foundation of BJJ for the future now planted into Greenland’s capital. The facility is well equipped, and there are some good students coming through.  Jason is quite unique as far as Greenlandic people go – he moved to Denmark for university studies (Dentistry), but unlike most Greenlandic people that move away for study, he did return to work in his home country. This shows he really has a passion for Greenland. And as he said to me, he will always train BJJ, so he’s in it for the long haul! 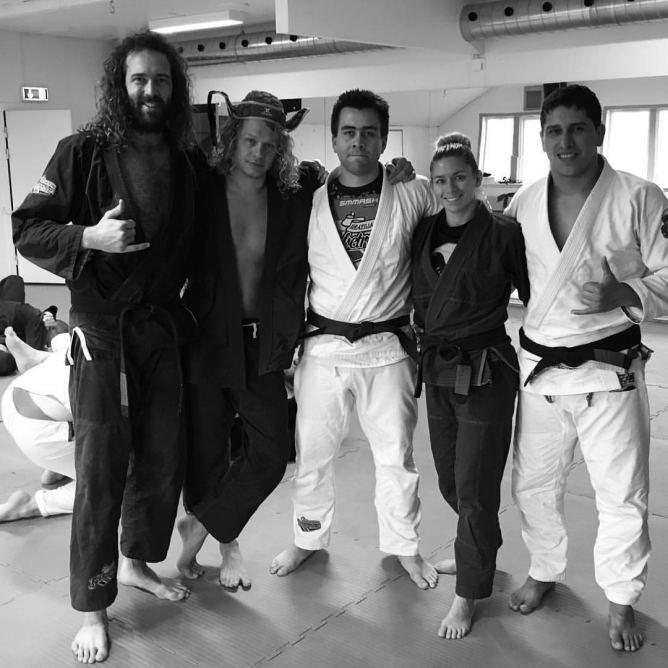 Caption (from left to right): Chad Wright, Christian Graugart, Jason Nystrup, Hillary Witt and Nelson Puentes.
Just last week four black belts made the journey to visit Greenland – Christian Graugart, Nelson Puentes, Hillary Witt and Chad Wright – to teach a BJJ Globetrotters camp. This would write a small piece of BJJ history – being the first black belts to ever teach in Greenland. It started as a personal invitation from Jason to Christian for a weekend of seminars at the club, but Christian thought it would be cool to bring some more black belts along, so he invited a few and it turned into a small private trip. A couple of weeks before the camp, Christian couldn’t get the idea of opening up the camp to everyone out of his head, and so the first BJJ Globetrotters free ‘karma camp’ was born! Eleven additional BJJ practitioners took up the offer with extremely short notice and joined the camp. All of a sudden the local BJJ community had 15 new bodies to practice with, and all belt ranks represented. 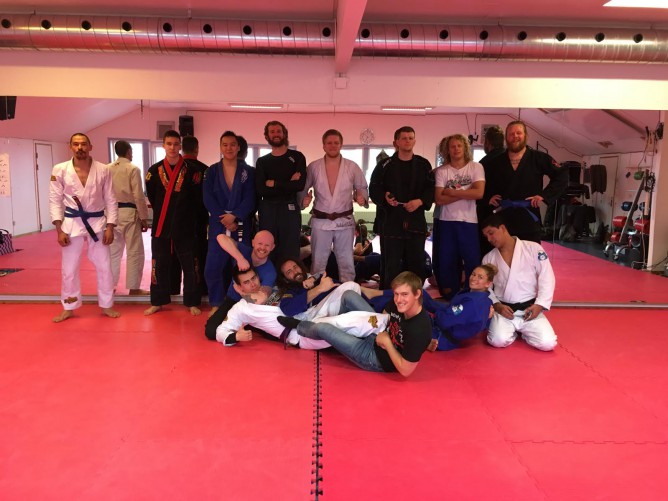 Caption: the last training session of the camp.
After three solid days of training there were a couple of belt promotions. Jason, the instructor of the Nuuk group, was promoted to purple belt, and in doing so became the highest rank in Greenland. One of Jason’s original students, Amos, was promoted to blue belt. We often hear the saying “Jiu-Jitsu saves lives”, but don’t always get to see that ourselves day-to-day in training. Amos is a true story of this – defeating severe alcoholism through training. In his moving promotion speech, Amos gave BJJ training direct credit for pulling him out of his situation. Somehow all of us (even the biggest Icelandic Vikings) seem to have gotten a bit of dirt stuck in our eyes at around the same time!

Caption: Jason (right) and Amos (left) after the belt promotion.
We enjoyed authentic Greenlandic cuisine every night, which was very different but also delicious. We feasted on whale and whale skin (I know that’s controversial in many places, but very normal in Greenland… and after all, we didn’t come here to eat chicken!), musk ox, reindeer, dried fish, caviar, and many types of seafood prepared in a tradition way by our hosts. Sightseeing was also awesome – we caught some great weather at the start of our trip and went on a Fiord safari, and were lucky enough to see some whales in action, even though it wasn’t the right season for it! We even went for a swim at the local beach, which was a little cold (-0.6℃), but fun. 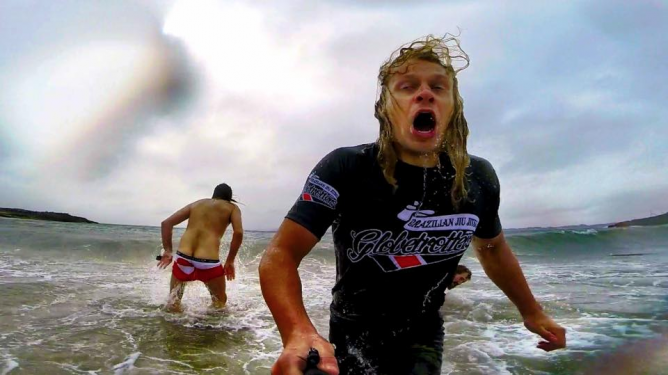 Caption: Christian Graugart (front), Chad Wright (with the Greenland flag underwear) and Scotty (head popping out), go for a freezing swim in the ocean at Nuuk, Greenland. 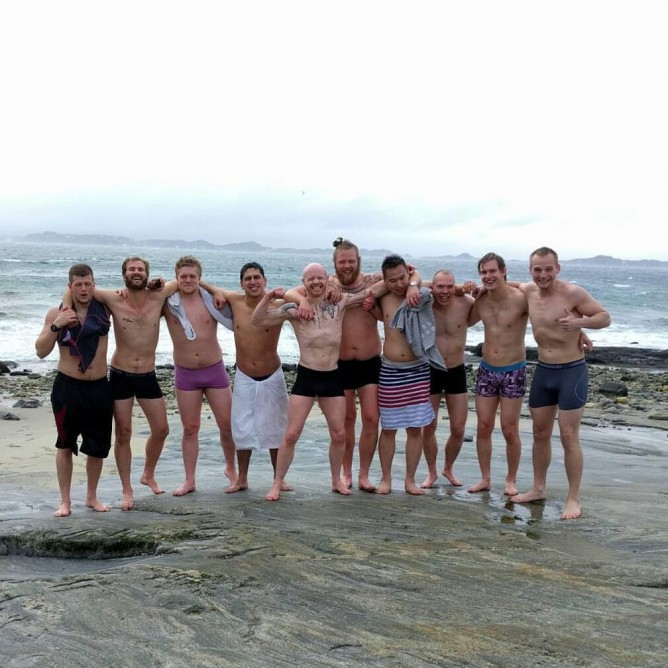 Caption: some of the guys after a freezing swim!
Overall this camp was a great experience – we certainly got more than just a BJJ gym – a new culture and sights to explore, some party (of course!), and some new friends made along the way. I know that the guys at Nuuk Martial Arts (www.facebook.com/MmaNuuk) would love it if any BJJ practitioners dropped in and trained with them, so if you find yourself in Greenland pay them a visit!
See you next time Greenland, Takuss!