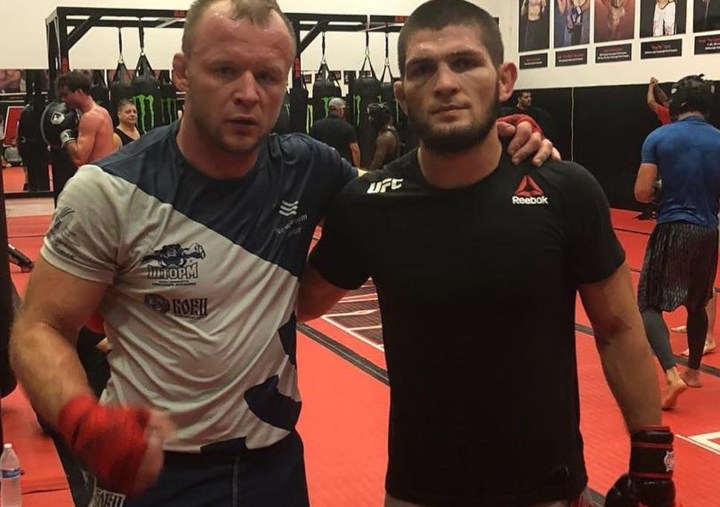 Have you ever stopped and asked yourself – what would it be like to spar and grapple with Khabib Nurmagomedov? Are his pressure game and his humble attitude as great as they are said to be?
Well, MMA fighter Joe “Skeletor” Giannetti has had a chance to experience training with Khabib first-hand. Here’s what he had to say about his experience.

GETTING PICKED TO SPAR WITH KHABIB ON YOUR FIRST DAY

Joe starts off by prefacing that, when it’s all taken into account, Khabib made him feel as if he had never wrestled, as if he had never grappled at all! And it wasn’t that he had just overpowered him, in Joe’s words, but it’s that Khabib simply had such great technique that he had no problems dominating him.

Coming to American Kickboxing Academy, Joe didn’t know what to expect on his first day of training there. However, things got unraveled to him pretty quickly: since Khabib was getting ready for the upcoming fight against Conor McGregor, his coach Javier Mendez was looking for someone who would be a good sparring partner for the occasion… Someone who is left-handed and who is lanky – and his finger pointed at Joe! Joe got picked to spar with Khabib, without ever having met him beforehand!

On the first round of the day, Joe explains, they did MMA. He decided to be a good sparring partner to Khabib by trying to fight like Conor; so, everything he did, he did in order to set up his left hand. However, despite giving his best, even when trying to move like Mike Tyson, Joe was unable to land a left hand on him. Not even once – he couldn’t touch him! What’s more, Khabib ducked under one of Joe’s punches and then shot into his legs.

After Khabib went for his legs, Joe actually managed to stuff his head below his knee, and he thought that was it! He thought that he had stopped Khabib’s takedown and that he’ll just pull his foot out, setting himself free… But, as he pulled his foot out, BAM! Khabib shoots for Joe’s other leg and Joe is now fighting him off of that leg, which he wasn’t ready for!
Khabib then gets the Double Leg and climbs towards Joe’s back while having his arm trapped. Then, he picks him up and, well, launches him into the air.

After that, Joe remembers how Khabib got stuck to him and how he used insanely good pressure, squeezing him into place. But it wasn’t raw strength that he felt, Joe explains: it was technical strength instead. „You could tell“, Joe continues, „that he wasn’t exerting himself. He whooped my ass and he wasn’t even trying.“
The sparring session unfolds with Khabib posturing every now and then, throwing a few punches, and then going back down again – with Joe thinking about how Khabib is going at perhaps 40% effort, while he’s trying as hard as he can to just shrimp out of the position.

Joe did three rounds with him that day, saying that he was absolutely exhausted after them. He was on the verge of throwing up, which he never had to do in training! Other than that, Joe says that after the training was done for, he was surprised with the wholeheartedness and sincerity that Khabib was thanking him for the rounds. „He was one of the most humble guys I’ve ever met“, Joe concludes.

Listen to more about Joe’s experience in sparring with Khabib on the video below: