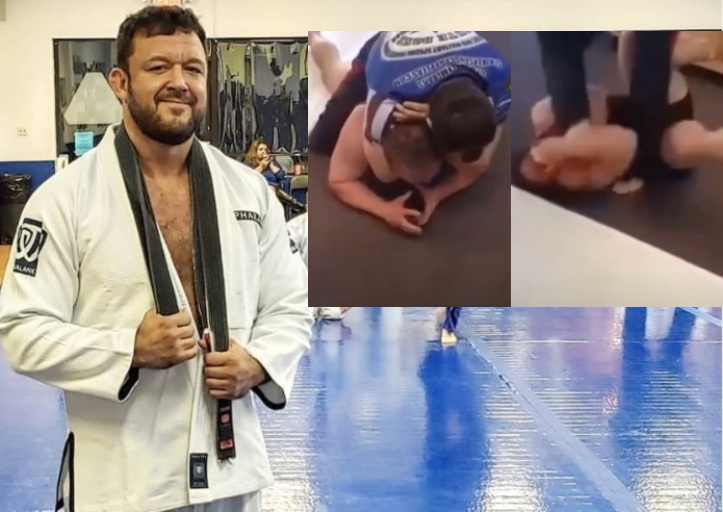 In Brazilian Jiu-Jitsu history there has been a legacy of the Gracie challenge where a random person off the street would walk up to a BJJ and challenge the instructor to a vale tudo match in closed walls.

This recently happened in the USA at Chute Boxe/Checkmat BJJ affiliate gym.

What we know from hearing what the instructor said at the end of the video, is that a big muscular guy challenged the BJJ instructor by punching him at his academy and by saying hat he was a pro fighter.

“He punched me so I pushed him and said I thought you were from the other gym. He said no, I’m from ***** And then he started screaming he’s a heavyweight pro fighter and attacked me again”

After slapping him, and applying a RNC, the instructor went full Vale Tudo and proceeded to batter him with stomps, soccer kicks…. At the end the guy got up but was badly hurt. The instructor told him to get out and they both fist bumped…

Michael Mihas aka Mr Jiu Jitsu who posted the video, wrote this:

“If you think you can walk into a Jiu-Jitsu gym and challenge people and expect them to act civil once you challenge their reputation and what they do for a living. You will find out the hard way that all the weight lifting and roids won’t help you and certain individuals don’t have a stop button once things don’t go your way.”

This is reminiscent of the Rickson Gracie challenge match:

BJJ superstar and former UFC fighter Tom DeBlass saw the video and gave his opinion. DeBlass is a tough guy who has had his fare share of challenges, but he is also known as someone with a good heart. He was against what the instructor did:

“One thing that utterly disgusts me is when videos circulate of martial arts owners beating the living sh*t out of someone that comes in and challenges them.

The issue is this, many times the person to walk into an Academy and challenge people, are a little slow. They live in their own little world and watch to many action movies. What pleasure does it give the martial arts owners to utterly destroy them. You already know you can.

If you feel you must teach them a lesson simply toy with them. Use Jiu-Jitsu and pin them, but don’t hurt them.
I absolutely believe in violence, that is if the person deserves it. A worthy opponent or someone who tries to harm you or someone you love. But to viciously hurt a clueless human that lives in their own little world is simply gross.”