Tim Kennedy: “If They Can Touch Your Face When You’re Grappling, You’re Doing It Wrong” 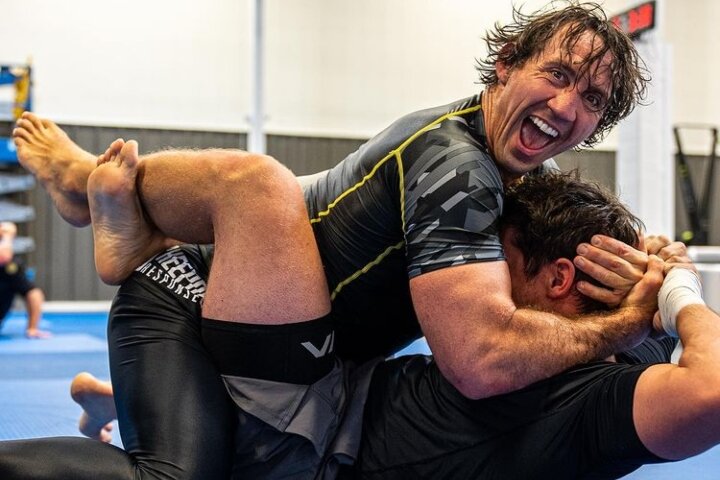 Tim Kennedy is a Strikeforce and UFC veteran, a Green Beret and Special Forces Ranger; but also a Brazilian Jiu-Jitsu black belt. He’s also big on criticizing the “sport” aspect of Jiu-Jitsu.
With that said, in an interview for the Jiu-Jitsu Style magazine Kennedy explained that adding a “combative element” to Jiu-Jitsu training is key:

In a Tim Kennedy class, you’re going to see takedowns, solid guard passing, fighting for dominance. You’re not always going to be taught that you should choose position over submission, but at the same time that you’re not going to roll to your back, give up position to maybe get a tap. You’re going to learn to either know you’re going to tear someone’s arm off or stay on top and beat them into oblivion.
These shouldn’t be surprising things because they’re quintessential things that are part of Jiu-Jitsu. Go back to the times of Carlos Gracie or Gustavo Gracie or Helio Gracie – they said these things, too.

Helio would say: ‘If they can touch your face when you’re grappling, you’re doing it wrong.” When you wrap your head round that he means that if someone can take their hands and grab your face, they can gauge your eyes, they can fish hook, they can punch you.
So, applying some of the principles established by the masters of Jiu-Jitsu, you get an idea of how the rebirth of the combative element of the art is important.

Kennedy emphasized that he isn’t all against the sport side of Jiu-Jitsu, but there are important things to consider:

There is a place for a lot of sport technique to be built into classes, and by no means do I think a Jiu-Jitsu class should all be about self-defense. I think the fundamentals of Jiu-Jitsu translate into combat, they translate into self-defense AND can be tested in sport.
But, if the focus is always on sport, the combat and self-defense aspects will always be deluded. The distinction is all about getting really good at the basics; the fundamentals.