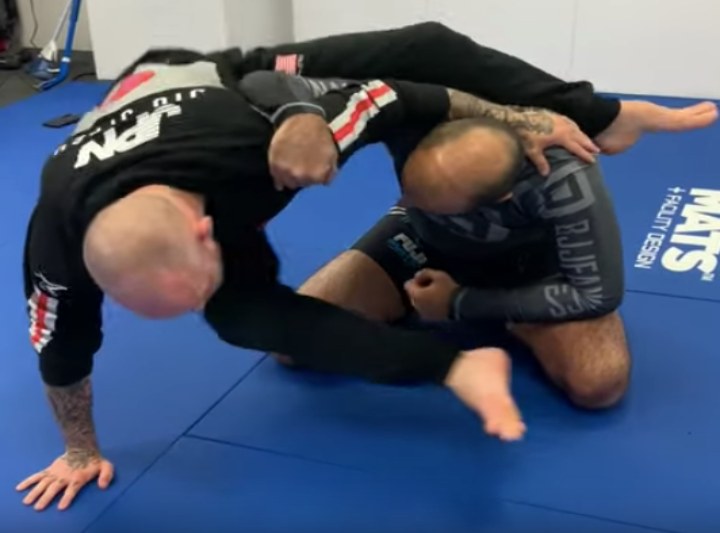 Jeff Glover, one of the BJJ community’s most beloved jiujiteiros and most creative competitors, has prepared quite a treat – in this video with Bernardo Faria, he explains how you can create a trap for your opponents, one which leads them straight into a Triangle Choke!
It is a neat, simple and a very effective setup from the knees… Let’s see how it works and hear more on how it was that Jeff had created his unique style in Brazilian Jiu Jitsu!

Jeff starts by pointing out that BJJ practitioners usually keep their elbows tight to their ribs, doing so in order to protect their torso from bodylocks and underhooks. So, to take advantage of that, Jeff creates a trap for his opponents and baits them by opening up this usually protected space: he lifts one of his arms, grabbing towards his opponent’s back by reaching over his shoulder.
He does this in order to make his opponent reach and grab for the space he opened up – and that is when the opponent goes for an underhook, effectively falling into Jeff’s trap.

JUMP FOR THE TRIANGLE – DETAILS THAT MAKE IT WORK

Once his opponent reaches for the underhook, Jeff jumps for the Triangle! However, as you jump, he points out that you shouldn’t focus on the leg which goes around the neck – but that you need to be focusing on the leg you’ll be using to post instead! Here’s a step-by-step breakdown:

1) Position your first leg over their back – that’s it, don’t give it too much focus for now.
2) Use your other leg to post on it: you do this by transitioning from being on your knee to posting on your foot.
3) Swing that leg around, over their shoulder and onto their back.
4) Now get that first leg around their neck, locking it with the other one in order to start setting up your Triangle choke. From there, Jeff says that you simply have to go for the usual adjustments in order to finish the submission, such as making sure that you have the correct angle in place and that you’re squeezing on the head.

Also, pay very careful attention to not just „slide through“ once you start posturing up on your leg. Jeff emphasizes that you need to make sure you’ve postured up on it in such a way that you’ve created enough space; space that will make it possible for you to effectively jump for the Triangle Choke.

Following this Triangle Choke Trap breakdown, Bernardo asks Jeff on how it was that he had managed to create the confidence connected with his flashy and risky Brazilian Jiu Jitsu game.
Jeff has a simple answer: one of the things that had enabled him to take risks, such as turning his back to the opponent, is that he has great confidence with his deep half guard.

Furthermore, he explains that he knows that whenever something turns out bad or when he fails while trying to do something unconventional; and when someone, for example, takes his back or mounts him, or establishes any sort of a dominant position whatsoever… That he can use his deep half guard skill set – one that he has been cultivating ever since he was a blue belt, when there weren’t as many people in the USA that knew about it – in order to escape.
And that knowledge is exactly what makes him feel at ease when he does the unconventional techniques.