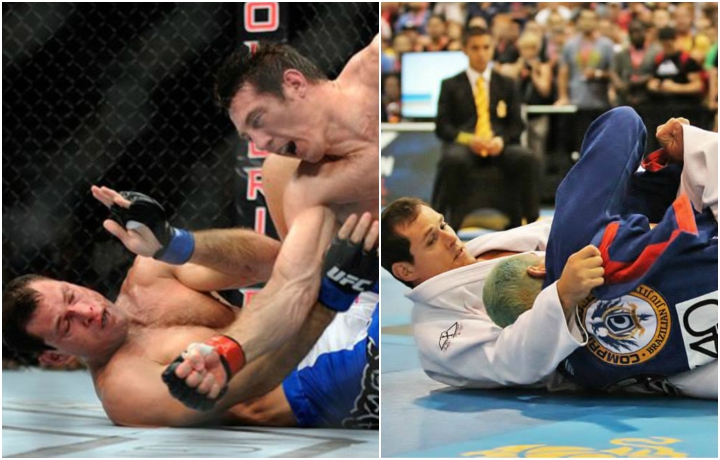 Brazilian Jiu Jitsu and MMA have had a love-hate relationship since forever. While BJJ certainly is effective in mixed martial arts – as was shown time and time again, submission and submission again – some of its aspects don’t seem to play well with the whole notion of ground and pound. Especially, as you’ve guessed, the bottom guard game.
However, this doesn’t mean that using the BJJ bottom guard game won’t yield results! If you know how to adapt it to the specific situation… Or even to the sport of MMA as a whole, you’ll be able to conjure up some really impressive results.

Don’t believe us? Well, here are several ways to modify your game that have been proven to work

But first, it’s probably a good idea to understand a very important aspect of guard game in MMA. Usually, it’s thought that there’s no use in trying to submit nor play bottom guard against really good fighters (especially against those who excel in grappling). Why? Well, because they’ll shut your game down and just punch you until you’re KO’d or submit you.
So what’s the solution to this? Yup, it’s that piece of bar „advice“ from the guy who never rolled in his life: just stand up.

Just stand up! Of course, it isn’t as simple as it sounds. MMA fighters have done this by posting against the cage and using it to get back to their feet. However, as elite grapplers evolved, so did their capacity to counter this approach. Just think back to what Khabib Nurmagomedov does; he pins his opponents to the wall, most dominantly by wrapping their legs with his own, proceeding to smesh them.
Otherwise, if not pinning them against the cage, these fighters will simply drive their opponents into the ground with a combination of powerful strikes and tremendous pressure.

So what’s the way out of this difficult situation? Yes, that’s right; it’s becoming innovative!

WAYS FOR ADAPTING YOUR GUARD GAME FOR MMA

If there’s one thing that you could do, which will make your guard game easier in MMA – it is to establish underhooks! Why?
For instance, if you really want to get up, getting an underhook will make it a lot easier! Now, you shouldn’t do this against the cage however. You should get away from the cage by any means necessary and then try and get an underhook; perhaps by using your butterfly hooks to help you out. This was done extremely well by Nik Lentz against Islam Makhachev at UFC 208.

Secondly, having a good Half Guard and even Deep Half Guard will take you much further than the Closed Guard ever could in MMA. And not just defensively, from the punches – but also due to its offensive nature! You can use it to set up sweeps that will catch your opponents off guard (pun intended)… And even more so if you’re experiencing heavy pressure against them. For example, the Twist Sweep which Ryan Hall so greatly demonstrates is a fantastic way to do this.

And finally, one extremely useful way for keeping your opponents in check in MMA is a setup that Gordon Ryan uses extensively himself. Basically, you’ll aim to – in one way or another – block the opponent’s arm (perhaps with an overhook, or even by reaching across their back on one side); and then, with one leg serving as a butterfly hook, you’ll try to elevate them and sweep them when they drive into you.
Alternatively, it is also a great tool for keeping them away from yourself until the sweep opportunity comes!