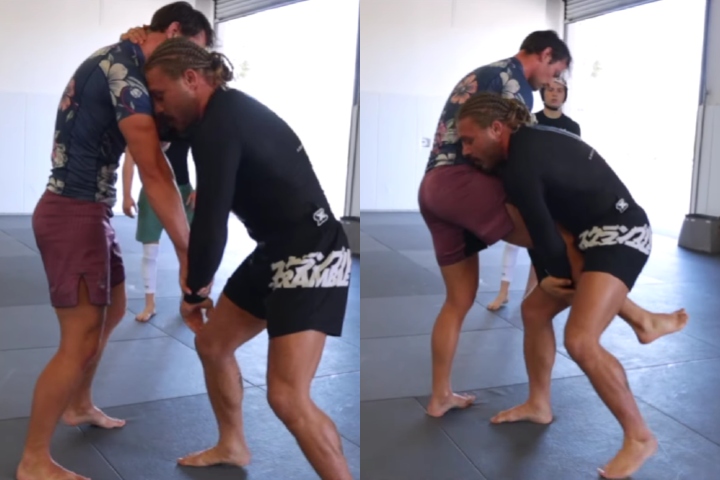 Ah, the Single Leg… We know, we know. You actually do like this takedown technique, even though you suck at it. But you’d still prefer to not be so bad at it, although it is – for whatever reason – kinda complicated for you to set up.
Well, listen up. There are numerous Single Leg setups that you can learn, but the following one is probably going to be the simplest one ever. And it’s really efficient as well, so waste no more time on other variations and learn this one!

You’re going to be setting up this Single Leg variation from the Arm Drag. And you can drill it with your training partner grabbing your wrist or you grabbing theirs, although the former option might be best for you to get the “feel” in the beginning.
What’s important for this Arm Drag is that you won’t be taking a big step to the side after it. Rather, you’re going to go straight ahead for the leg; you don’t have to cut to an angle, but grab it straight-on.

From here, you’re going to take a small step to the side, with your rear leg following up on that step and scooping the training partner’s leg in the process. At the same time, you’re supposed to bow down – this is what’ll ultimately take your partner down to the mats.
Just make sure that you’re tight to their leg throughout the movement. Your shoulder needs to be pressed against their quadricep muscle and your head can (and should) be to the side of their hip. Also, don’t fall down with them because there’s a danger of chin straps and subsequent Guillotine setups.