This Is How Your Instructor Decides Who To Promote 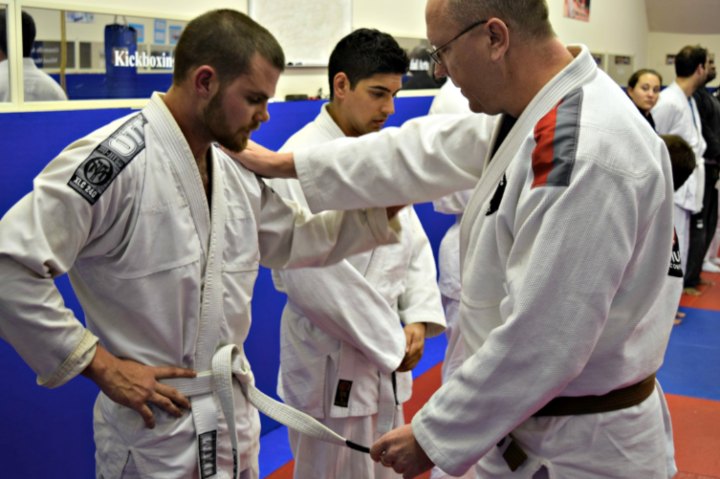 It’s a fact: you’ve been training consistently and you’re always in class on time. You don’t skip warm-ups and you give your absolute best every time you drill, roll and stretch in the end. In a word or two – you’re doing everything you can in order to become the best that you can in BJJ. Fantastic!
However, there’s that one tiny thought that’s kind of bugging you… It’s a question, really, one that asks: „Well, when is my professor/instructor going to promote me?“

However, deciding who to promote – and when to promote them – is not such an easy decision for your instructor. There’s a lot of questions that come to his mind.

IS THE STUDENT IMPROVING IN HIS TECHNIQUE MORE THAN IN ANYTHING ELSE?

It’s inevitable that you’ll progress if only you stick to BJJ for long enough, especially at lower belt levels. Mat time is important, and the more hours you spend rolling, drilling and altogether „being“ in Jiu Jitsu, the better you’ll be.
But, how better are you becoming? No, speed of your progress isn’t the point here all that much; getting better faster is good and will catch your instructor’s eye, but what he wants is more substantial… He wants to see the quality of your progress. This quality is deemed by how much your technique is progressing as opposed to other factors.

Essentially, if you’re getting better by making leaps and bounds in your strength and explosiveness gains, you’re missing the long-term point of BJJ. You’re missing the technique conquers all aspect! Your instructor wants his students to focus on improving their techniques first and foremost; and when he sees someone doing that constantly enough, you can bet that this person has a big „plus“ in the instructor’s mind.

HOW WELL DO THEY MEASURE UP WITH OTHER STUDENTS?

Jiu Jitsu is a martial art entrenched in competition, so it only makes sense that your instructor will be scouting how well a student competes against other students.

Basically, this means looking into the students’ performance against those who are at the same belt level that he is. Is he capable of imposing his game on them and does he manage to subdue them more often than not? Is he capable of defending and escaping their attacks? If so, great! But, on the other hand, how does he roll with higher belts – is he able to defend and give them a hard time finishing him? Can he threaten them with a submission attempt or two? Does he finish them with sincere effort from time to time?
When the student is doing well both against his „belt peers“ and the higher belts, the instructor will take notice.

IS IT TIME TO PROMOTE THEM?

Sometimes, a student will have all of the necessary skills and knowledge for a promotion, but the instructor will decide that it’s not time yet. Simply said, he might decide that the student needs to grow into his belt more and gain additional time in training and/or in competition, before he is promoted to the next level.
This is an aspect that makes your instructor more than just a mere coach; he is taking care of the students’ all-around progress. He wants them to grow not just into competent technique-practitioners, but also into martial artists that have enough experience and faith in themselves, so that they’re able to carry and use their Jiu Jitsu with confidence.

ARE THEY A GOOD MARTIAL ARTIST?

In connection to the previous point, your instructor is on the lookout on how the student is behaving. Meaning, is the student arrogant when on the mats or does he try to help the lower belts whenever there’s a chance? Does he listen intently to the instructor and does as he’s told, or does he do whatever he pleases?
That is: is the student not only a good fighter, but a great martial artist as well? If that’s taken care of as well, then sky is the limit.