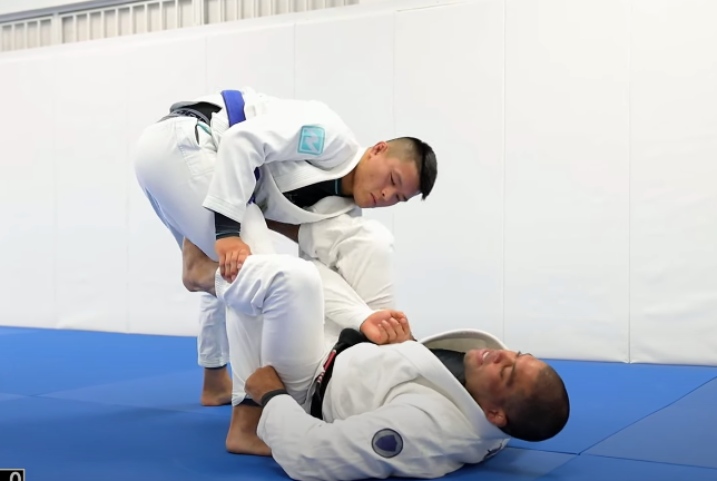 If you want to become known as someone who totally dominates their BJJ opponents, then you absolutely have to develop a strong backtake game! There are so many approaches to it – to taking your poor opponent’s back and to then setting that choke up, especially in the Gi – and one of them is from the DLR Lasso Guard.
Want to learn how to do it? We have your back; here’s Andre Galvao, demonstrating and explaining it in detail!

THE DLR LASSO GUARD SWEEP – GETTING IT RIGHT

Before we get to the part of taking your opponent’s back, it’s necessary that you understand how to settle in (a strong) De La Riva Lasso Guard first, as well as the sweep that comes with it. And, as always, it’s important to start out with the proper way to grip. Namely, Andre demonstrates that you should aim for a strong grip on the opponent’s sleeve; but, more importantly, that you need to focus on not taking the pants’ grip lightly as well.
That is, when you grip the opponent’s pants – on the side you’ve already sunk in your hook – reinforce it by turning your wrist outwards. This’ll make it more difficult for your opponent to break the grip.

Now, it’s equally important that you don’t immediately shoot for the Lasso as well! Andre explains that you first need to break your opponent’s posture down; to do that, push their leg out. Now that they’re „down“, get that Lasso – and place it deep. You’re now in a position to set up your sweep.

To set it up, post your Lasso foot on the opponent’s hip. By posting on it, bridge up and shoot a deep DLR hook. Now that you’re there, Andre demonstrates that you need to bring your legs towards yourself in a sort of a curling fashion; and you will sweep your opponent down!
With them down on the mats, it’s now your turn to take the back.

The first approach to taking the back is a Berimbolo-like one. As you’ve swept your opponent, make sure that your Lasso leg’s knee stays posted on their stomach; if it doesn’t, you will lose position.
From this starting point and while keeping your grips, change the shoulder you’re on so that you’re looking at the opponents’ backside; doing that by rolling over. Once you get here, Andre explains, you need to curl your legs down.
From here, simply let go of the grip you’re controlling the opponent’s sleeve with and reach underneath them, grabbing the Gi on their back. Then, bring your heels towards the floor and, at the same time, bring your knees away from the opponent’s body. Andre emphasizes that it’s very important to keep your knees pinched in this situation.

From here, grab the opponent’s pants and the collar on the back of their neck while, simultaneously, changing the position of your hooks; so that your inside leg now „hops over“ and hooks from the outside.
All you’ve got to do to finish is pull them towards you, underhook their arm so they don’t escape, settle in a Seatbelt grip, get your second hook in; and you have their back!

An alternative to this Berimbolo-style backtake for the not-so-flexible athlete, Andre shows, is to – once you’ve swept the opponent down – simply post your forehead to the mat and roll over it; this will be less stressful for your neck. Once you’ve done that, grab their pants and go for all of the same steps explained above.

Watch Andre Galvao demonstrate this setup in much more detail below: