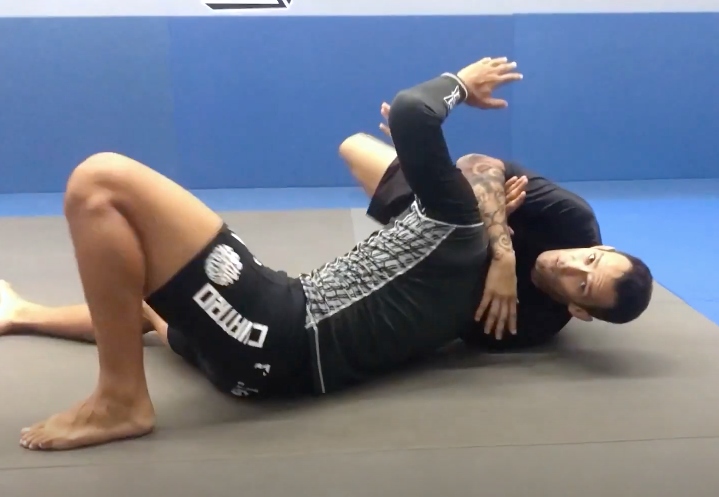 Alright, let us guess. You’re one of those jiujiteiros that has really long arms, and you simply adore hitting your training partners and opponents with the Darce, don’t you? In fact, we’re going to go so far to say that it’s probably one of your favorite submissions… If not the favorite one. And that’s great! Darce is a really nasty technique, and not just because of its choking power; but because it can be set up from rather unsuspecting positions and situations. Ones, from which your opponents won’t see it coming!
A great example of this is the Darce setup from the Falcon Guard. Let’s see it demonstrated and explained by Joel Bouhey. You’ll love it!

So, this may actually be the first time that you’ve been introduced to the Falcon Guard in and of itself. Chances for this are greater still, if you’re at a white or a blue belt level; which is no wonder, since up until now, most of your time was (probably) invested into honing your craft around the basic positions.
You know what we’re talking about. You’ve spent the majority of your mat time in the Side Control, Mount, on the Back of your training partners, in Half, Butterfly and Open Guard positions, and so on. Sure, you might’ve tried something on the side here and there; but if you’re anything like the majority of BJJ practitioners out there, then you’ve probably stuck to what you’re most familiar with. The basics.

Well, we’re here to inform you that it’s a good time to begin thinking outside of the box. For, yes, improving your basics is something that you should definitely pursue all the way until the end of your career. But you can’t expect yourself to reach your full potential if you never expand your horizons, if you never try something new… And if you don’t apply yourself to it with zest and focus!
Surely, you may be frightened a bit to give a chance to the Falcon Guard and other positions you haven’t practiced all that much beforehand. But you felt like that in your first class, while holding your training partner in Closed Guard – and you didn’t shy away from it. So why should you do that now?

You know the saying: „Ships are safest at the harbor. But they aren’t meant to stay there.“ Go. Give the Falcon Guard and other non-basic positions a shot. You’ll come to love them!

Now that you’ve picked up some courage to practice the Falcon Guard, let’s get to the technique! Joel explains that the Falcon Guard, in and of itself, is a seated Butterfly Guard position in which you’ll shoot your arm for an overhook; and catch the bicep of your opposite hand with it, which (in this case) is grabbing the opponent’s head.
But this is reasonably simple to escape from, right? Your opponent can just weave his arm inside and push you away, so as to free themselves.

That’s exactly where your Darce setup comes into place. Joel demonstrates that, as your opponent goes to weave his arm to the inside, you need to slide your overhook arm deeper inside, towards the opposite side; as well as use your other hand to pull the opponent’s head down.
Simultaneously, you’ll change the position of your legs so that your whole body now looks to the side you’re setting up the Darce at.

From there, just lock your Darce, flip the opponent over, walk into him and squeeze for the finish.

Watch Joel demonstrate this setup below:

If you have an armpit, you have a darce as Joel Bouhey shows you innovative ways to lock in this submission. Learn his system to Darce Everywhere. USE PROMO CODE “BJJEE TO GET 10% OFF.