This Is How To Become A Triangle Choke EXPERT 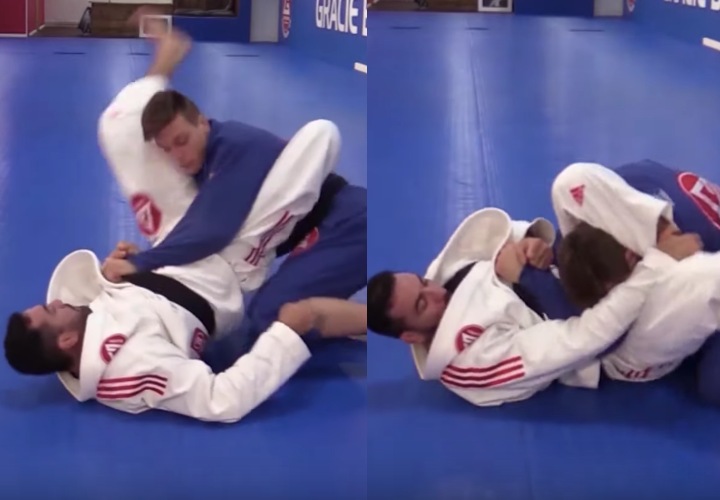 The Triangle Choke will always be cool! However, the truth is, it can sometimes be really difficult to set it up and finish properly. This is because the Triangle – as almost every other submission – has quite a bit of details that you have to get right, if you want to become a Triangle Choke expert.
So, without any further ado, here are the most important Triangle details! Learn them and use them, and you’ll soon have a new favorite submission.

SETTING UP THE TRIANGLE

A lot of beginner-level Jiujiteiros have the wrong idea about setting up submissions. They think that it’s a one-way street; that you just „see“ the submission, go for it, and that’s it. However, it’s not straightforward like that, most of the time. You first have to set it up by making your opponent defend against something else.
In other words: if your opponent defends from one thing, you’ll get an opening to attack an another submission! Keep that in mind when setting up Triangles from now on, and you’ll gain a lot more opportunities for them. For example, go for the Hip Bump Sweep; if the opponent defends by posting his arm out, he has a clear Triangle coming his way.

Additionally, even though you do need to break their posture, don’t think of pushing the opponent down to get the Triangle. Instead, focus on shooting your hips towards their neck to catch them.
As with all things BJJ, it’s all in the hips.

LOCKING IT IN AND FINISHING PROPERLY

The way that the Triangle finishes are taught most commonly are through the emphasis on pinching your knees together and pulling the opponent’s head down. But, even though this does work, it isn’t the most efficient way to get the finish.
Instead, you should heed the words of advice from Ryan Hall. Ryan emphasizes getting the 90 degree angle against the opponent – with your head coming to the same side as your choking leg – by scooping underneath the opponent’s leg or arm. This angle, in turn, will enable you to extend your choking leg into the opponent’s neck; while „curling“ the other leg.

This makes up for a much more effortless and much more effective finish than the aforementioned „knee pinch“. Check out Ryan Hall’s fantastic explanation on this below:

Secondly, your other leg – the one you’re locking the choke with – should cover the opponent’s other shoulder. Basically, this leg is supposed to make their shoulder invisible, covering it with the region up to the knee.
And why? Because this will ensure that it’s close enough to the opponent’s neck for the choke to be as tight and as effective as possible. Therefore, don’t just leave your second leg „dangling“, locking the Triangle at the opponent’s lat. You need to rather make it a point to get that knee as close to the opponent’s neck, covering their shoulder in the process – and you’ll get the tap very soon.

And finally, don’t forget that you need to keep the opponent’s posture down throughout the Triangle setup and finish. Getting that 90 degree angle and pulling the opponent’s head down will solve this problem best.