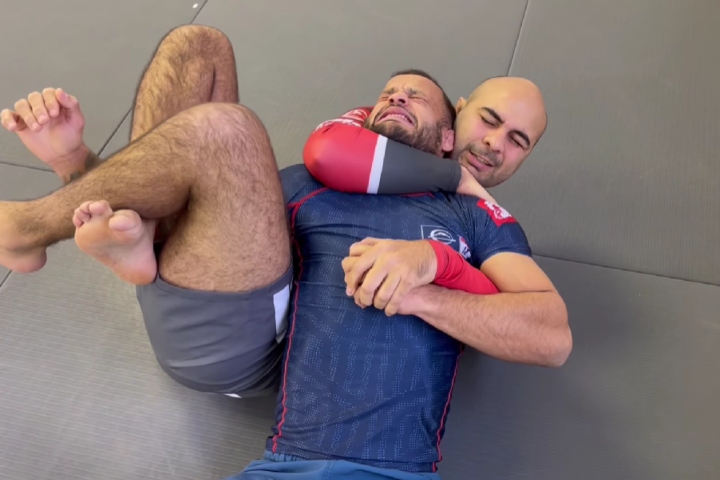 When your opponent turtles up, that can be one of the most difficult positions to attack through in Brazilian Jiu-Jitsu. However, you can make it simpler for yourself if you learn how to extend their limbs and if you can then apply a couple of attacks.
For example, when you extend their near-side arm, you can go for a Crucifix and then for a neat choke setup. Here’s how Matheus Diniz does it, as explained by Bernardo Faria.

If your opponent is in the Turtle, you should try and go for the seatbelt grip as fast as possible (preferably, while they’re transitioning to Turtle). From there, you’re going to open up their near-side arm by digging your knee in-between their knee and elbow.
Once you’ve done that, you need to trap their arm with your leg; just “throw” your leg over their arm and lock it in place by pinching your legs together. Then, with your seatbelt grip still in place, fall back.

You now have the Crucifix position. To get the choke from here, you first have to trap the opponent’s remaining arm with your arm, and start digging underneath their chin – which is probably going to be tucked in as tightly as possible.
But here’s a neat little trick that Matheus Diniz does to open up his opponent’s chin. He extends his fingers completely and first digs underneath the chin with his elbow. Then, as he gains a bit of space there, he lifts his knuckles up in order to create more space.

From here, he slides his hand a bit further. Then lifts up the opponent’s chin again… And repeats that process as many times as necessary, until his arm is deep underneath the chin.
To get the choke from here, he presses his head against the opponent’s head and twists his elbow (as if he’s pulling a collar really tightly). Watch how to do it on the video below: