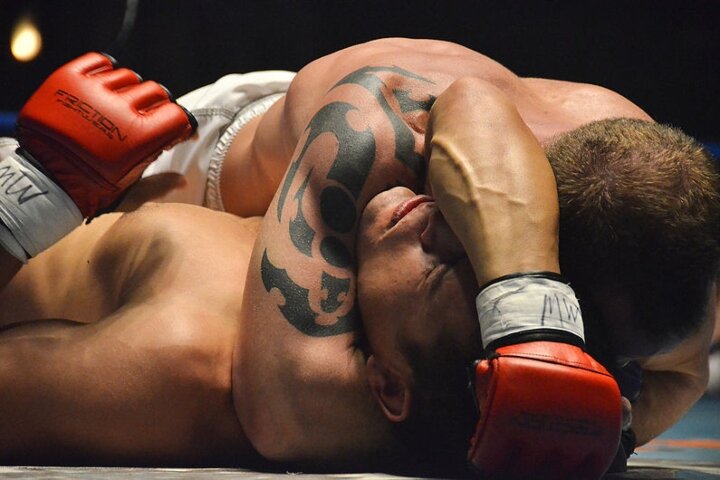 The Arm Triangle… It just might be one of your favorite submissions. But, what you’ll come to notice – especially against bigger and stronger opponents – is that, no matter how hard you squeeze and try to “walk around” so as to finish the submission, the tap never comes. And no wonder, as this is one of the toughest techniques to finish against a resisting opponent.
However, as it is the case with other techniques, it’s the smallest details which will ultimately bring you the biggest leaps in success. For instance, the following two adjustments – one of them being the elusive “chin in the eye” one – will go a long way in your next roll.

THE “CHIN IN THE EYE” DETAIL FOR YOUR ARM TRIANGLE

The first detail to your Arm Triangle success is to change the positioning of your choking arm. Instead of your thumb facing up, this arm’s palm has to be pointing down. Flat on the mat almost, except from the grip you’ll establish (make sure that it’s an S-Grip).
By making this small adjustment, the top of your forearm will flex more and so you’ll make the choke even tighter than it was beforehand.

Now, if your opponent starts resisting the choke by pushing against it with their arm, you’ll use the “chin in the eye” detail. What this means is that you’ll simply counter the opponent’s push by driving your chin towards their eye.
Of course, this doesn’t mean that you’ll literally push your chin into their eye socket. But it’s a great cue, which will leave your opponents tapping in no time.

Watch how to execute these two details on the video below, and learn why you should position your shoulder underneath the opponent’s chin, as explained by Nick “Chewy” Albin: