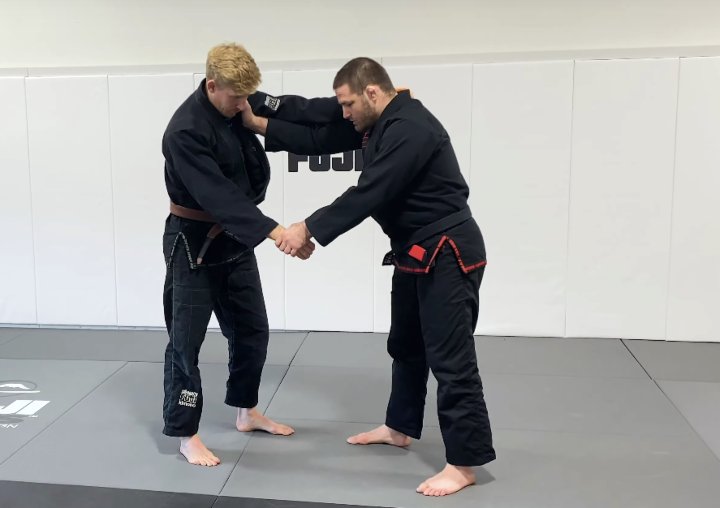 Getting rid of the collar grip can be one of the most frustrating things to do in Brazilian Jiu Jitsu. This is especially true if your opponent or training partner is an experienced competitor; and even more so if they have been training Judo extensively.
Therefore, it is of vital importance for you to learn a couple of techniques on how to effectively break the collar grip. Travis Stevens, a silver Olympic medalist in Judo and a John Danaher black belt, shows his favorite ones.

STARTING OFF ILLEGAL – ENDING WITH A GRIP BREAK

Travis starts off with perhaps the most common grip break. His training partner has a strong posture on his shoulder, incapacitating him to close the distance.
To initiate the setup, Travis does something which is a bit illegal; but which, in his words, only lasts for a split second and for which he was never condoned by the referees. He places his thumb inside the training partner’s sleeve, grips it, and then pulls it tightly. This way, he has established a solid grip himself.

From there, Travis steps back with his leg on the opposite side. Why? Because it enables him to bow down with his back and his head… From where he can jam his partner’s sleeve as high on the forearm as possible, locking it there. Then, Travis uses his legs and his back to drive himself upwards, and looks towards the ceiling.
This tightens up the Gi; the only thing Travis has to do now is immediately follow with a motion of pulling back – which will break the grip.

But what if your opponent has a really strong grip, one which no matter how hard you try, you just can’t seem to break with the first technique? No worries. Travis has an alternative technique, which might be a bit more complicated – but which is much more effective as well.
Essentially, Travis wants you to practice your shoulder punch. You’ll roll your shoulder back and then punch with it, pushing the opponent backwards by using the grip they have on your shoulder. He emphasizes that you have to be actively pushing into your opponent as you do this, that you have to be leaning into them. This will make them move, which is exactly what you need for this technique to work.

How come? Well, when Travis leans back from there, he’s separating his Gi from the chest – creating great tension at the point where the training partner’s grip is. Then, he grips the partner’s arm and rolls it in order to break the grip. Notice how he does this: he rotates the arm so that where the partner’s wristwatch would be ends up on his shoulder. Also, his forearm ends up across the partner’s arm.

THE ELBOW IS YOUR FRIEND

The third grip break Travis shows is the one he actually hated being done against him, one which he even evades doing in training sessions himself.

He explains: for starters, you’ll reach underneath your opponent’s gripping arm and grab your own collar just below their hand, with your fingers inside it. From here, you’ll put your elbow to use; loop it around the opponent’s arm, make wrist to wrist contact (again, where their wristwatch would be – do so where your own watch would be as well) and push into it with your whole arm and shoulder. This’ll break their grip.
Travis enjoys this setup especially for when he’s already gripped the opponent’s second sleeve.

Pretty neat techniques, right? Watch Travis Stevens explain them in much more detail on the video below: