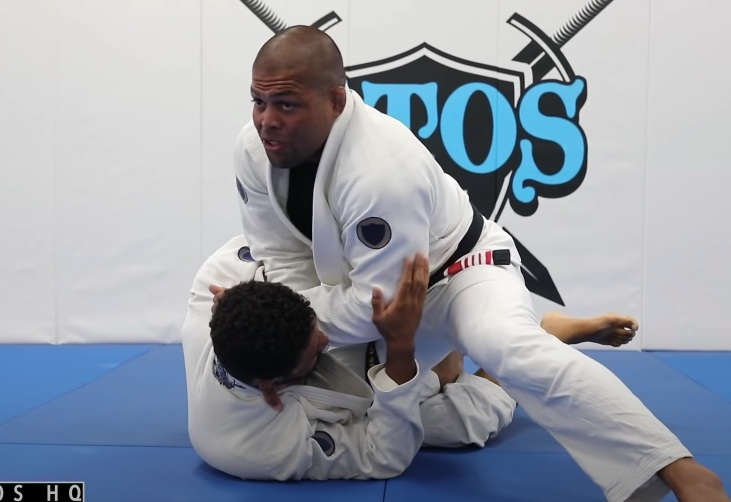 There are, and will be, many situations where you’ll try something and things won’t go exactly to plan. Most often, this will be the case in guard passing; you’ll try a technique, and your opponent will stop you in your tracks, making you stuck in place. This, of course, doesn’t mean that you should get discouraged – but that you should push forward with the attempts of imposing your game on them! However, this isn’t to say that you have to go for another guard pass… Maybe you can set up a submission!
A great example of this is setting up the Cross Choke from the Knee Cut position. Andre Galvao demonstrates the ultimate way for doing so.

First of all, when you’re stuck in the Knee Cut position, don’t go for the Cross Choke immediately. This is where the good ol’ saying: „Position before submission“, comes to use.

Andre explains that you should, first of all, make sure that your opponent doesn’t flatten his back onto the floor. If they do this, they’ll be able to recover their guard quite easily, and especially if you’ve gotten your Cross Choke grips in already. Therefore, prevent this from happening by grabbing the opponents’s collar with both hands and pull them towards you!
Keep them on their side. This will make it much more difficult for them to flatten themselves out.

Also, make sure that your knee is in the right place – on the mat. You may be stuck halfway through your Knee Cut attempt, in almost a Knee Shield fashion. You won’t be able to successfully go forward with the setup from here… Unless you place your knee on the mat.
To do so, Andre shows that you need to use your other leg. That is, as you’re holding the opponent by the collar, shift your base leg closer to his bottom leg (one keeping your knee elevated) and push it down with your knee. Then immediately push your knee down to the mat and widen your base up yet again.

Once you have a position as solid as this one, you’re good to go for the choke.

SETTING UP THE ULTIMATE CROSS CHOKE

Andre demonstrates that the first grip you establish is, likely, the most important one. Namely, grip the opponent’s collar with a four-fingers-inside grip; but don’t do it just for the sake of it. Make it deep, so that your thumb reaches all the way to the back of the opponent’s neck; and so that there isn’t any space between it and the opponent.
You can test whether you’ve placed this grip tightly or not. Just shake the gripped collar; if your arm moves freely, then you need to make the grip tighter.

Now comes the magic of the second grip. Sure, you can execute it in a standard fashion; gripping the opponent’s gi on his upper back and then squeezing your forearm across their neck. But Andre shows an alternative way of doing so; reach across the opponent’s back and grab their belt so that your lat ends up across their face. Press it down on them.
Then, simply lower your hips and extend your legs to the back, as you shift more and more weight on top of their head and neck. Simultaneously, pull with your four-fingers-in grip… And you will soon get the tap!

This is a fantastic and easy to use Cross Choke variation; best used from a Half Guard and Side Control position.

Watch Andre Galvao demonstrate the setup in much more detail on the video below: