The Story of Arrhichion, Olympic Champion Who Won While Being Fatally Strangled 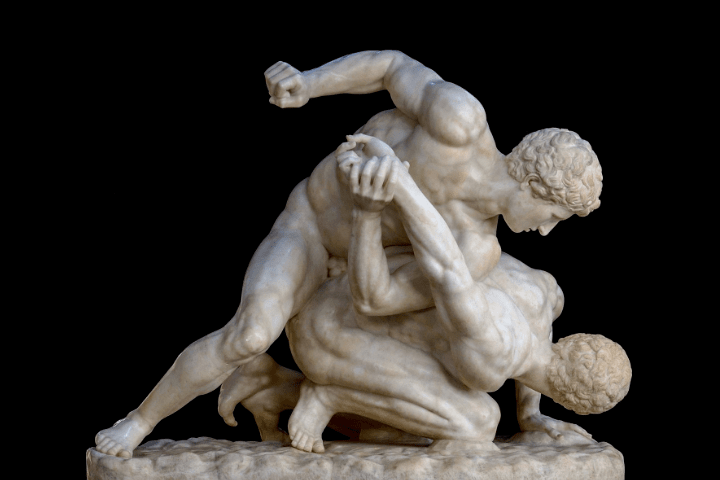 A lot of times, what inspires us to train are stories about great athletes. Athletes, who’ve gone to great lengths in order to win – and such is the story of Arrhichion, the Olympic Champion from Ancient Greece… Who won a pankration match by breaking the opponent’s ankle, even though he got choked out and died afterwards.

Pankration was a violent sport in Ancient Greece. It represented a combination of wrestling and boxing (it was, perhaps, the very first instance of mixed martial arts).
It had virtually no rules, as hitting, kicking, twisting of limbs and strangling were all allowed. The fight would end when one of the athletes admitted defeat or when they went unconscious. 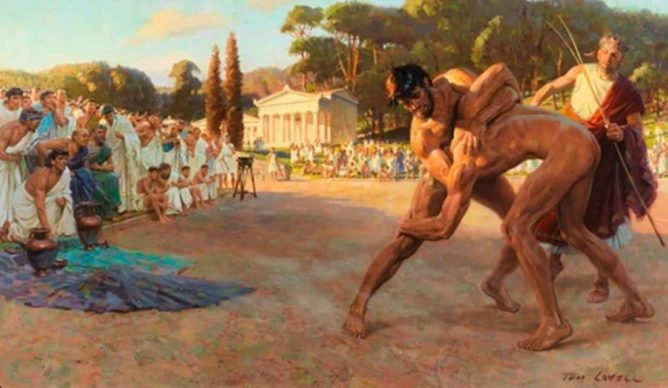 Arrhichion was a three-time Olympic Games pankration champion, winning the titles in 572BC, 568BC, and in 564BC. According to the story, in his last match, Arrhichion’s opponent was choking him out; applying pressure in order to try and get Arrhichion to acknowledge defeat. However, Arrhichion would not “tap out” and continued to fight back.
At that moment, his coach told him: “What a noble epitaph you’ll receive if you do not submit: ‘He was never defeated at Olympia.'”

These words gave Arrhichion strength and he delivered a blow to his opponent’s foot, breaking his ankle. As a result, the opponent had to release his hold (maybe he had him in a Rear Naked Choke and crossed his ankles?). However, it was all too much for Arrhichion, who died immediately after.
Because his opponent submitted, the judges ruled Arrhichion as the true winner; making him the only Olympic athlete to emerge victorious after their death.

Flavius Philostratus, a Greek sophist writer of the Roman imperial period, wrote about the story in detail:

Accordingly the antagonist of Arrhichion, having already clinched him around the middle, thought to kill him; already he had wound his forearm about the other’s throat to shut off the breathing, while, pressing his legs on the groins and winding his feet one inside each knee of his adversary, he forestalled Arrhichion’s resistance by choking him till the sleep of death thus induced began to creep over his senses.

But in relaxing the tension of his legs he failed to forestall the scheme of Arrhichion; for the latter kicked back with the sole of his right foot (as the result of which his right side was imperiled since now his knee was hanging unsupported), then with his groin he holds his adversary tight till he can no longer resist, and, throwing his weight down toward the left while he locks the latter’s foot tightly inside his own knee, by this violent outward thrust he wrenches the ankle from its socket.