The Spinning Baseball Bat Choke Will Sleep Your Opponents FAST! 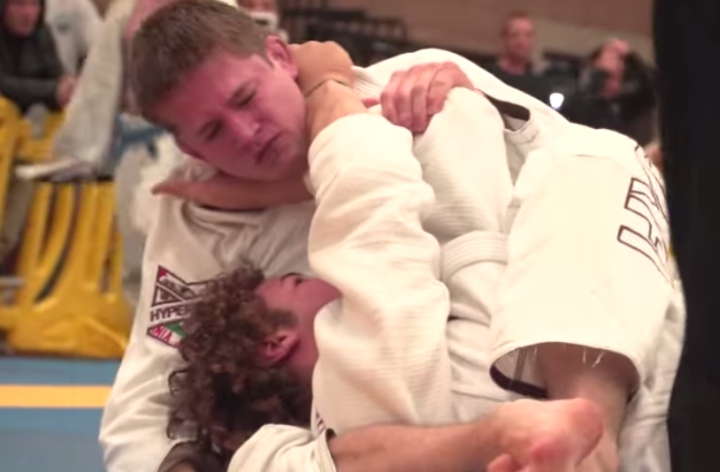 If you want to tap your opponent out, then one of the things you should think about is: „Which submission and its setup are the sneakiest ones from here… Which is the one that my opponent won’t expect?“ And one of the sneakiest submissions you can utilize is the Baseball Bat Choke! That’s true from top Side Control; but here’s the catch – it’s equally as dangerous from the bottom position as well!
Let’s take a look at coach Tom, from The Grappling Academy, demonstrating and explaining these two setups.

To set up the Baseball Bat Choke from top Side Control, coach Tom demonstrates that your bottom hand needs to grip the back of the opponent’s collar with the thumb in; while your upper hand should grip the side of the collar with four fingers inside. However, it’s obvious that you’ll rarely be able to do this immediately from Side Control. So, after you have your bottom grip – make sure to press your knuckle into the mats here, so as to prevent the opponent from turning into you – transition to Knee On Belly; and get your second, four-fingers-in grip from here.

Once you have the grips in place, it’s time to start initiating the choke. To execute, you’ll need to squeeze your elbows in together and spin around your opponent! That is, get up on your toes and skip a quarter of a circle; so that your hips are over their head, all the while you’re pinching your elbows in close to one another.
You’ll make a tripod; your head will land where the toes of your Knee On Belly previously were, next to the opponent’s hip (so that they can’t hip escape). You’re on your toes, hips high off the ground and spine in alignment with the opponent’s spine. To choke them out, row your wrists towards yourself while preserving the squeeze (pay attention to the fact that the bones of your wrists should press directly on the side of their neck; this is what will tap them out).

If posting on your head is a tad unpleasant for you, coach Tom advises that you can try placing your shoulder on top of the opponent. This will take a lot of pressure off of your neck. Also, make sure that when you train and your training partner taps out, that you let go of the collar immediately; don’t post on your hands to get out, as this will just make the choke more intense.

BASEBALL BAT CHOKE FROM THE BOTTOM

To set it up from the bottom – in this example, from Butterfly Guard – coach Tom shows that you can actually bait the opponent into the choke! That is, grab their collar with the grips you’d use for the Baseball Bat Choke; but don’t do it in the cross-collar way. Just do it straightforwardly, as this won’t raise any suspicion on their behalf.
And here’s the catch: then, shift your legs to the side. This will make them believe that they’ll get into Side Control!

When they start going for it, coach Tom demonstrates that you should be turning away from them while, simultaneously, pinching your elbows in together. This will often be enough for tapping them out. If they defend by trying to peel your hand off of their neck, then you can just continue squeezing as you roll them over onto their back.
After they’re on their back, you can go forward with the abovementioned Baseball Bat Choke setup.

Watch coach Tom demonstrate these and other fantastic details on the video below: