The Right MINDSET And APPROACH When Rolling With Better Training Partners 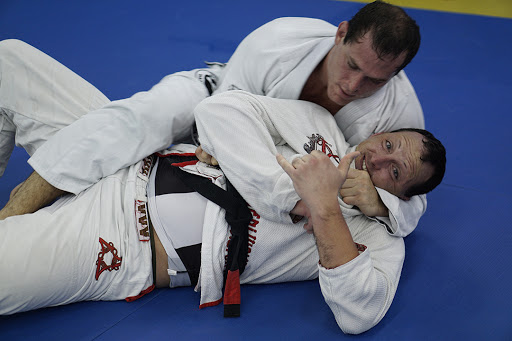 So, your coach matched you with that terrifying blue belt (again) for your next roll. He’s bigger, stronger, faster, and much more technically sound than you are. In short: he’s way better and way more talented than you are.
You just know that you’re going to be tapped out in the next 6 minutes or so – repeatedly, over and over again. There’s no escape from this fact of life… However, what you could change are your mindset and approach when going into the roll with him.

Here’s a proper, constructive way to go about rolling with those Jiujiteiros who are simply (a lot) better than you are.

THERE WILL ALWAYS BE SOMEONE BETTER – AND THAT’S GREAT

It’s important to realize, first and foremost, that no matter what your mindset may be about it – there will always be someone better than you. They may or may not be on the mats, training with you at the given moment, and you may be the best one in your class… Right now. But rest assured that there will come a time when you’ll face an uber-talented blue (or even white) belt, who’ll wreck you.

And this is great! It’s an opportunity to learn more, to become better in your own right; but only if you approach it with the right mindset.

Before you go into the roll, you should seek to prevent any kind of self-deprecating mindset from showing its ugly head and growing within your own thought process. If you tell yourself that you’ll „lose anyway“, you’re off to the worst possible start.
Just because you’ll (most likely, let’s not kid ourselves) lose, that doesn’t mean that there isn’t anything potentially beneficial to take out of the whole thing.

So, start transforming your mindset into a learning one. Begin telling yourself: „Okay, I’ll lose… But so what! Just because I’ll feel like a train hit me afterwards doesn’t have to mean that there’s nothing to be gained. You know what… I’ll become better as a result!“

Once your mindset is set on the right tracks, you’ll set yourself up for success during the roll too. Therefore, let’s take a look at what you should do during a roll to get the most out of it!

Now, when you’re rolling with someone who is way more skilled than you are, your first objective should always be to fight back as much as you can. In other words, even when they’re totally obliterating you, you shouldn’t just quit. Instead, give your absolute best to utilize every single percent of your skillset.
This will get you used to performing well, even when in dire straits and under pressure. If you learn how to implement your skills even at the toughest of moments, you’ll have a ridiculously easy time using them when stuff is going your way. Plus, by acquiring this approach, you’ll challenge your training partner into becoming better themselves – so you’re contributing to their growth, too!

And secondly, look at what they’re doing! This means that you can’t just focus on being the best you can be; but that you have to be observant enough to notice how they’re executing the said techniques.
This isn’t an easy skill to master, and it will take some time for you to acquire it. However, it is an extremely important one; if you become able to notice the ways your training partner(s) successfully set up their techniques during the roll – without having to stop and think about them – your sense, understanding, and adaptability Jiu Jitsu will improve by drastic, even sky-high margins.