The Match That Shocked The World: Wallid Ismail-Royce Gracie 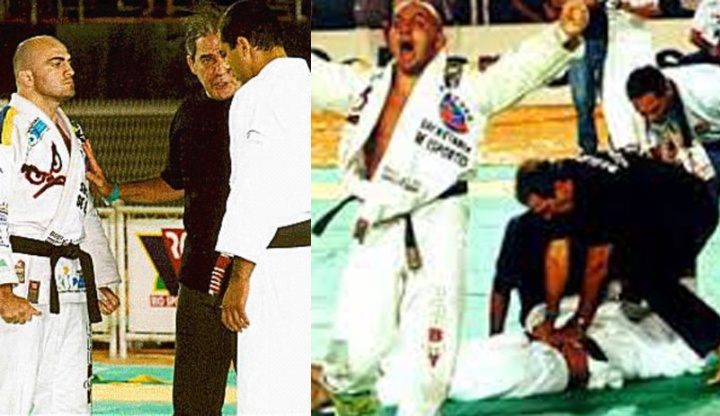 Wallid has a history with the Gracie family. He had a famous match with Ralph Gracie at the Copa Rio Sport Center, with Ismail winning a referee decision. In 1993, Wallid scored another victory over a Gracie when he defeated Renzo Gracie. After his win, Ismail challenged the main members of the family, Rickson and Royce, stating that he would fight them in any style anywhere. Only Royce accepted the challenge, demanding special conditions for the fight, like having no point scoring and no time limit, thus making the fight only winnable by submission. With renowned Hélio Vigio as the referee, the bout took place in December 1998, and was won by Ismail after four minutes and fifty three seconds, choking Gracie unconscious with the Relógio (also known as clock choke or koshi-jime), a move that has been associated with Wallid ever since. After the match, Royce’s side tried to negotiate a rematch, but according to Ismail, they withdrew from the proposition after several months.

After the fight with Royce, Wallid enjoyed a period of great recognition. He was one of the very first Jiu Jitsu fighters to be able to live off BJJ in Brazil, living solely from his prize money and his sponsors.

Probably one of the greatest rivalries in BJJ at the time was the one between Wallid and the late Ryan Gracie, the quarrel started in a beach in Copacabana when Ryan (who was with friends and team mates) assaulted Wallid who was on jis own. Wallid later challenged Ryan several times for a fight (like in the interview you can confirm bellow) but the challenge was always ducked by the Gracie.

Wallid Ismail is a legendary Brazilian jiu jitsu (BJJ) black belt who competed for the Carlson Gracie Academy from the 1980’s decade until early 2000’s in both BJJ and mixed martial arts (MMA). Wallid was famed for his “never say die” attitude, his loyalty to his instructor Carlson Gracie, his “clashed” with a few members of the Gracie family as well as his involvement in the jiu jitsu vs luta livre rivalry during the 1990s. After retiring from competitive jiu jitsu and MMA Wallid Ismail became a fight promoter, leading the Jungle Fight organization in Brazil.

Royce Gracie is a legendary jiu jitsu and MMA/ NHB (no holds barred) fighter, being arguably the sports’ most influential figure. Growing as the son Helio Gracie (a founding member of the Gracie Jiu Jitsu Academy), Royce Gracie held the Gracie family torch high while helping to built the sport of MMA and bringing awareness to Brazilian Jiu Jitsu through his famous victories in the early UFC’s against fighters of other martial arts disciplines. In 2003 Royce Gracie was also inducted in UFC Hall of Fame.