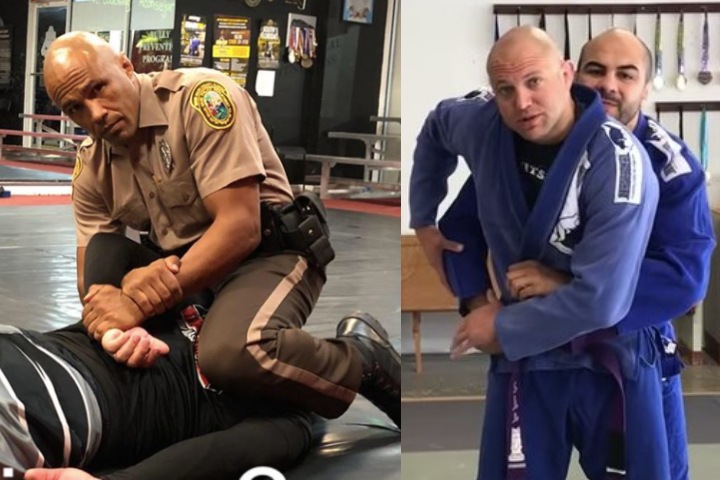 My name is Maurice Scardigno. I’m a Detective Lieutenant with a large northern New Jersey police department. I’ve been in law enforcement for 19 years, and have training in BJJ off and on since 1997. I’m a brown belt under Karel “Silver Fox” Pravec, a 3rd degree Renzo Gracie black belt.

I work for a large northern New Jersey police department. That day, I was the only Patrol Division sergeant on the road when a call of a domestic violence incident in-progress came in over the radio. Dispatch gives out the address, “It sounds like it’s going pretty good”, they said.

I happened to be passing the address. As I jump out for the car and start running up the property, a woman…completely disheveled, runs out of the house. Thinking that she’s the victim, (…and that I’m the hero) I grab her, put my arm around her and say, “Don’t worry…I’ve got you…you’re going to be ok.”

She replies, “No! No! He’s upstairs…Hector (not his real name)…my son…he’s killing my husband!” I don’t ask how (which I later realized was tactically unsound) and I run up the apartment steps into the house.
When I get to top of the steps I’m looking for bad guys…I’m looking for victims…”where’s the threat?”, I ask myself.
It’s a sh*tty little apartment. One bedroom. Basically the kitchen is in the living room. The glass coffee table is broken. The flats screen TV and computer are on the floor.

I see Hector… he’s big…an athletic 6’4 240 lbs.
Hector is mounted on top of his father…Strangling him with both hands… The father’s face is beaten, but he isn’t resisting…he isn’t moving. He’s unconscious, motionless. The son looks possessed…he is literally killing his father with his bare hands…continuously strangling his father, jerking his head back and forth every time he exerts himself on his father’s neck…

This wasn’t the first, or last, time in my career where I was forced to make a split second decision that could have traumatic consequences for me, the suspect, or the victim. In fact, these decisions are made regularly by police officers throughout the country, and, usually ending in injuries, deaths, law suits, bad press, administrative suspensions, forced medical or psychological evaluations, terminations or a host of other undesirable consequences. Nobody wins.
In my 19-years in law enforcement, I’ve been fortunate to never have to shoot anyone. I’ve pulled my weapon countless time and was always prepared to use it. Thankfully, I’ve never had to. I’ve been in dozens of physical confrontations….sometimes with a partner next to me, sometimes alone. Most of the time I came out without getting hurt…and so did the bad guy.

Hector didn’t even look at me when I walked into the room…I don’t even know if he knew I was there…he just stayed mounted on top of his father…strangling him.
So my options began running through my head…Hector is certainly using deadly force, which means I can use deadly force:

1. I could shoot Hector in the head, (That would instantly neutralize the threat, and maybe save the father).
2. I could begin beating him with my baton, (That probable would work).
3. I could use my pepper spray (in almost 20 years I’ve never seen OC used to deescalate and calm a combative suspect).
4. I could tackle and punch Hector off of his father (but I’m not very strong, or have real knockout power…it would be a scramble, he’s going to want to fight, and depending how we land in that tiny apartment it could be real bad for me).
5. I could punt Hector in the head. (Probably the same result as #4).
6. Or I could use Brazilian Jiu Jitsu.

While he was strangling his father to death, I got a “seatbelt grip” on Hector and ripped him off. We were on the ground, I took him to my support side, so I’m not laying on my weapon…just in case…I had good back control; my hooks were in, I was maintain pressure with my hips, and my head was in a safe position; We were ear to ear.
He started to freak out and began swinging violently. It was like trying to hang on to a bucking bronco. He was trying to punch me, pull my hair, and scratch my face. But I stayed calm. The position was very familiar to me; I train in Brazilian Jiu Jitsu. Despite being much smaller, weaker, and outweighed by 70 pounds, I used my body weight, leverage, and technique and stayed safe. I transition from the seatbelt grip to the “gift wrap” position, also known as “twisted arm control”. I transitioned from back control to “knee-on-belly”, then held Hector in an “S-mount” while he continued to resist.

Mid struggle, his father comes back to life, taking a gasping breath as the blood rushed back to his brain. Hector continued to resist, but it’s useless. I’m holding Hector’s wrist with one hand…that’s it. No punches. No kicks. No baton. No pepper spray. And definitely, thank God, without firing my weapon. I’m not superhuman. I’m a forty-something year-old husband, father of two…who doesn’t like to workout and has a crappy diet. But…I know Brazilian Jiu Jitsu. I used leverage, balance, and technique.

Backup officers arrived on scene minutes later…Hector was handcuffed without incident. His parents realized how close the father came to death at the hands of his son and explained than Hector had a history of mental illness and a recent change in his medication regiment had made him uncharacteristically aggressive. They thanked me for not killing their son. Hugged me…both in tears.

I’m a Brazilian Jiu Jitsu hobbyist…I don’t compete. I’ve never fought MMA…I’ve trained a couple of times a week since the late ‘90s…sometimes weeks without training…sometimes months….I actually took a 12 years hiatus at one point. I enjoy it, but I’m not an expert. I take it seriously when I’m on the mats training, but training isn’t my life…it definitely takes a back seat to my family, wife, kids, house, and work…but I’ve been training consistently enough over the years that I’ve become proficient enough and gained some incredible benefits from it.

What knowing Brazilian Jiu Jitsu gives me is confidence. Why? Not because I’ve learned any secret death touch…not because it’s made me faster, stronger, or given me knockout power…and certainly not because it has made me unbeatable. What BJJ has done for me over the years is put me in very difficult positions, usually in very physically uncomfortable situations…over and over and over and over…and force me to deal with it…not freak out…not lose my composure…not lose my temper…not panic…not get scared…and find the logical solution. My instructor, Karel “Silverfox” Pravec says, “Brazilian Jiu Jitsu may not be intuitive, but it is logical.”

Hypothetically speaking, if ten different officers arrived on scene in that apartment before me, each would have used a different solution to solve the immediate problem of Hector strangling his father to death. Ten, perfectly legal options to stop the threat. I’d argue all of them worse than me using, very simple, very learnable, very fundamental BJJ techniques. Positioning and leverage. That’s it. No gunshots, not broken bones, no lawsuits, no deaths. Just me, and Brazilian Jiu Jitsu saved Hector’s life.

I’m not comfortable second guessing the actions of all of the officers who have recently used deadly force on unarmed suspects. I understand. I’m certain none of them woke up that morning and premeditated shooting an unarmed suspect. I also think it’s fair to assume that they felt they were out of options. They were losing the fight. They were going to die. They were scared. They had no choice. They were never in a similar physical situation and forced to use logic to find a solution. They used the only weapon they knew would work. And although most of the investigations into the incidents turn out to rule it was a “good shoot”, I’m certain that all of those officers wished that they weren’t put into a situation where they felt shooting a suspect was their only solution.

The only defensive tactics or martial arts training most officers receive is when they are recruits in the police academy. It’s sad, but true. Oddly enough, for most agencies it’s not a priority. Weapons training, (shooting, baton, pepper spray) is mandated. Learning how to close the distance on an aggressive suspect, taking him to the ground, and controlling him is not. Officers around the country do what they are training to do; you “Fall to the level of your training”. Although Hector was much larger and stronger, I completely controlled him on the ground. He was absolutely zero threat to me because I train in Brazilian Jiu Jitsu. Brazilian Jiu Jitsu saved his life.