The history of Wrestling before the development of Luta Livre 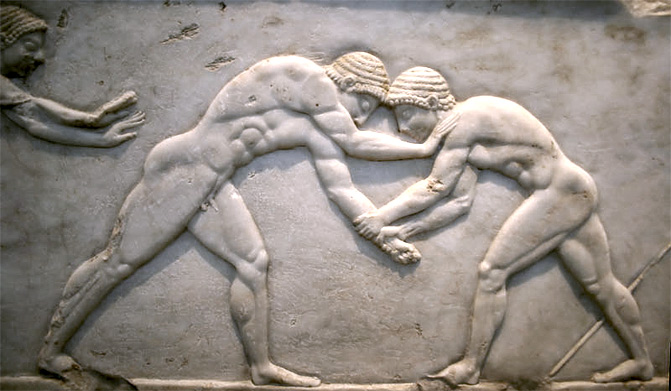 In order to understand and describe the sport of Luta Livre, it is important to start with general information about the sport of wrestling and all its relevant forms for the formation and development of Luta Livre Submission. Details about the historical development of the different styles of wrestling are not discussed in this article, but can be research more in depth under the given references.

The exact time when the wrestling was created is still not known, but this type of sport can be traced all the way back to the early history of mankind. The authors Czech, Gain, and Peuker, believe that since in those times the weapons were not as developed, wrestling perhaps was a survival method and technique that the humans used in order to defend themselves from other humans or animals. The humans in earlier times probably had a overwhelming part of direct physical confrontation by hunting tasks, as the weapons of that time were designed for short distance applications. The hunted animals have been rather bigger and adult species. There have be noted a very close match to modern Rodeo traumatic lesion. This way of hunting maybe began 250.000 years ago according to Stiner. This behavior can also be heard and seen from the different legends and narrative that exist, as well as the paintings that have been found.

Evidence of wrestling as a competition sport can be traced in older civilizations, like the Assyrian, the Chinese, and the Egyptians. As a relevant proof of this would be the paintings found inside the temple from Beni Hasan in Egypt. This painting shows a high level and high quality of performance techniques that were used in the sport in those times, for example clinch, throws, and others that are used in wrestling, many of these techniques are still used in the modern version of the sport and some have been further developed. The author Poliakoff also describes that there is an extraordinary amount of standing techniques as well as other ones; these techniques help the attacker take control of the head, legs or shoulders of the adversary.

In ancient Greece they adopted the sport of wrestling from the Egyptians and introduced it to their physical education system. They even built special “palaestra” for the training of wrestling. With a place built they were able to start with their structurized training methods and practicing the sport with more refined fighting techniques and maneuvers, that were considered standard in the “palaestra”, this was described by Poliakoff based on the papyrus fragments from the first and second century AD. The author Miller was of the opinion that ground wrestling was confused with Pankration. To win at ground fighting, falls were irrelevant and the athletes had to force their opponents to give up. A surrendered athlete signalizes his abandon by rising up his index finger. The ground wrestling was conducted in a heavily watered area. Some Authors described parts of ground fighting maneuvers even with joints dislocations. This suggests that the purposefully use of submission holds can be assumed. Without doubt ancient Greece had a great impact on the influence and development of wrestling.

In Asia it is difficult to know the exact time of origin of wrestling. According to Zhongyi, there is a type of wrestling in China, known as Shuai Jiao, that emerged from previous martial art styles that were developed during the Zhou and Chin dynasties. This style of wrestling was more popular in Manchuria and Mongolia. Later during the Ming dynasty the Japanese obtained an exemplar of the Chinese   martial arts writings, based on these writings the Japanese created the art of Ju-Jutsu. Based on the art of Ju-Jutsu, Jigoro Kano started a new art, called Judo and in 1882 Kodokan was founded. Judo played an important role in the development of the modern Luta Livre, but more about this in the coming articles.

Wrestling has also had a strong presence along the German history. During the High Middle Ages and earlier, wrestling was considered one of the seven skills needed by the German knights. Wrestling was not only a skill reserved for the knights but it was also accessible and beloved by different members of the social ranks, like peasants and farmers. Wrestling counted as an addition to fencing and was mostly used for self-defense. Experts like Ott, Dürer and Auerswald created a manual for learning purposes, where many drawings and writings instructed different fighting techniques without the use of weapons. In these manuals readers can find how to perform painful holds, throws, and other techniques that are similar to those techniques used today in the sport judo,wrestling and Luta Livre.

In the 17th and 18th centuries Friedrich Ludwig Jahn popularized wrestling, especially among the gymnasts. There were also educators that took an interest in the sport, like GutsMuths and Vieht, who focused on the implementation of wrestling as part of the physical education program in schools. The authors Czech, Gain, Jürgens, Peukert took the definition from GutMuths that wrestling can be considered the “crowning achievement of all physical exercises”. 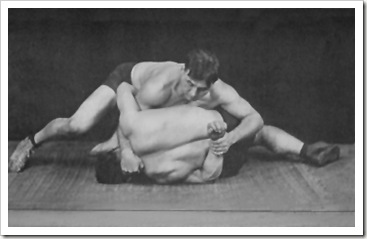 Wrestling Developments in the 19th Century

According to the authors Czech, Gain, Jürgens and Peukert, the development of wrestling was remarkably beneficiated by the influence of French students, as well as professional wrestlers at the end of the 19th century. In 1886, Jean Dublier was the main protagonist in the introduction of the ground fighting, which expanded the stand fighting.

Wrestling was expanding all the way from Greece through France and into other countries of Europe. According to Rast the free-style wrestling (catch-as-catch-can wrestling) was developed in England and spread from there throughout the world. What facilitated the expansion of the sport were the improvements in the technology of telecommunications and transportation, as well as globalization, which increaded the migration movements. These changes gave different people the opportunity to have access to different cultures by easily being able to visit different countries and immigrate. Through this not only was wrestling spread, but also other martial arts that are found in Asia.

English physical educationalist and author J.G. Chambers is cited as the creator of the Catch-as-Catch-Can style, developed in the 1871. Although initially gaining little recognition, it grew in notoriety throughout the mining districts where the laboring workforce already enjoyed other forms of wrestling and sports such as rugby. The rough nature and fast pace of the style became an exciting spectacle and suited the disposition of the tough local miners and provided a means of supplementary income.

Over time, many successful wrestlers began to make a living out of their contests, from direct fight purses and side betting. This led to the phenomenon of “professional wrestling”, not the stylized “works” now associated with the terminology but real matches for decent pay. Early pioneers of the Catch-as-Catch-Can style would begin to travel abroad to contest others such as England’s “Little Demon”, Joe Acton of Lancashire who on April 24 1882, issued a challenge to any American between 140 to 170 lbs. Perhaps even more influential was the greater numbers of immigrants flocking to the United States at this time, taking with them knowledge of the Catch-as-Catch-Can style and propagating amongst the US populace. An example of a standout among these was Edwin Bibby, an English immigrant who was as a prolific catch as catch can participant and title contender in the 1880’s.

Catch-as-Catch-Can wrestling apparently enjoyed high popularity amongst the US population  with international tournaments held regularly in the 19th century. By 1900, Catch-as-Catch-Can had replaced the more popular style of Greco Roman and the fame of its champions, such as William Muldoon, in the United States. This phenomenon was propelled by great names such as Frank Gotch, (trained by former world champion Martin “Farmer” Burns), Ed “Strangler” Lewis and Tom Jenkins alongside international sensations Joe Acton, George Hackensmidcht from Estonia and the Polish Zybszko brothers Stansilau and Waldek. As well as becoming the most popular wrestling style in the country, the United States also became home to numerous world champions and many world titles were contested with large audiences of all classes in attendance.

In contrast to the Greco-Roman Style, the Catch-as-Can-Catch style of wrestling allowed the fighters to catch their opponents from the head to foot, with relatively few holds barred. Catch-as-Catch-Can was still deemed to be quite violent at this time, even by the competitors who at times spoke about the risks involved with certain holds. Some of the allowed techniques were raised and discussed generally about the danger they represent. Catch-as-Catch-Can was also practiced with a jacket, and this variant was called “Cornish Wrestling”. There also were fight matches covering those three styles as well others.

Gradually over time the sport drifted toward more “worked” style matches and the legitimacy of world titles began to wane. Some of the former greats became coaches and exercise mentors whilst others travelled abroad to compete professional wrestling circuits. Stanislau Zybszko was among many who began this type of work after his retirement, who along with his brother, Wladek travelled to South America to perform in matches. Catch-as-Catch-Can Wrestling played an important and essential role in the development of modern Luta Livre in Brazil, but more about this in the coming articles.

47. Bridgeport Herald (1903). Champion Wrestler discuss dangerous holds. Dan McLeod lays down some mat axioms that would be well for novices to memorize. The Neck is the part of the human anatomy that needs great care during a struggle.  A few holds that can kill. Vol. 13; No. 46; pp. 2; 22nd Feb. 1903.